A Big Year for U.S.-Cuba Relations!

We’ve done so much together in the last year. Finally, after 50 years of tension, progress is being made on U.S.-Cuba relations—thanks to the efforts of not only President Obama and forward-looking policymakers, but advocates and grassroots activists like you! The President announced a new policy of diplomacy on December 17, 2014. Travel and trade restrictions were loosened. Cuba was removed from the State Sponsors of Terrorism list in May. Then in July, the U.S. embassy in Havana and the Cuban embassy in Washington, DC were finally reopened! These historic moments marked the restoration of diplomatic relations between the United States and Cuba for the first time in five decades.

In October, LAWGEF led a unique people-to-people delegation to Eastern Cuba. Unlike most delegations to Cuba, this trip focused on Oriente, the Eastern part of Cuba, so crucial to Cuba’s history and independence. From visiting the tomb of Cuban national hero José Martí to viewing the site where the boat Granma landed near Las Coloradas, from touring the home of the author of the national anthem and the freer of Cuba’s slaves to experiencing the magic of Cuba’s music and dance, from touring lovely Camaguey by bici-taxi to lunching with campesinos at their privately-owned farm, from visiting artists’ studios and pottery workshops to reveling in the beauty of the countryside and the deliciousness of Cuban food served in paladares (private restaurants), from experiencing the solemnity of the memorial to Che Guevara to dancing with a seniors’ club… we did it all. Experiential education is always the best way to learn. 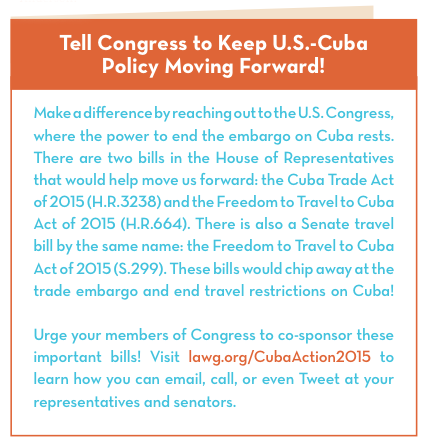 We celebrate the incredible steps forward toward a new policy –but there’s still more to be done! President Obama took unprecedented actions to change U.S.-Cuba policy last December, now it’s up to you to tell Congress to take the next step and end the travel ban and trade embargo once and for all!

This article originally appeared in The Advocate, LAWG’s biannual newsletter. Download the Fall 2015 issue of The Advocate here.