A Cautionary Tale: Lessons of Plan Colombia for Mexico and Beyond 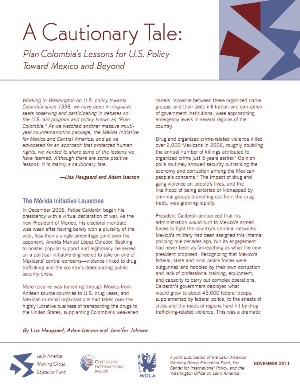 New report warns U.S. policy must learn from, but not emulate, the Plan Colombia experience.

Today the Latin America Working Group Education Fund (LAWGEF), the Center for International Policy (CIP), and the Washington Office on Latin America (WOLA) released A Cautionary Tale: Plan Colombia’s Lessons for Mexico and Beyond, a new report that dissects the Colombian experience of the past ten years, drawing out human rights and strategic lessons that are relevant for U.S. policy toward Mexico and beyond.

In December 2006, Mexico’s government launched a military-police offensive that, more than 40,000 organized crime-related deaths later, has not made the country safer. At congressional hearings or press briefings in Washington, whenever people discuss solutions to Mexico’s out-of-control violence, someone will inevitably bring up Colombia as a “model.” The United States, the speaker will say, must offer Mexico an adapted version of “Plan Colombia,” the framework in which the South American nation has received $8.5 billion in mostly military U.S. aid since 2000. Though some indicators of violence in Colombia have been reduced, to repeat the Plan Colombia experience in Mexico would be a very bad idea, argues A Cautionary Tale.

The report concludes that “The ‘success’ of the past several years in Colombia is only a partial, and fragile, victory at best—and it has come at an unacceptably high human and institutional cost.” In addition, it states that “Plan Colombia does carry a host of lessons for U.S. policy toward Mexico, Central America, and other areas of the world. These lessons, though, are not the ones that the ‘Plan Colombia is a model’ crowd might expect to draw.”

The 28-page report by LAWGEF, CIP, and WOLA three Washington-based organizations that have closely followed U.S. policy toward both countries since the 1990s, directly takes on the flawed Colombia-Mexico parallel. It walks the reader through Plan Colombia’s results, both positive (reductions in violent crime measures, at least until 2008) and troubling (a dramatic rise in extrajudicial killings by the armed forces). It explains the many ways in which Mexico today differs sharply from Colombia a decade ago.

A Cautionary Tale lays out a dozen lessons that U.S. policymakers must draw from the Colombia experience. They include a reminder that the United States must first “clean its own house,” showing the political courage necessary to take on the U.S.-based drug demand, arms trafficking, and money laundering that do Mexico and Colombia so much harm. The recommendations call for a strategy that, instead of relying overwhelmingly on militaries, helps partner countries strengthen their civilian capacities, particularly those of dysfunctional justice systems.

“The only way out is for citizens to live with a government—not just a military, but a government,” says report co-author Adam Isacson of WOLA. “And that includes a justice system with the tools to stop that government’s representatives from abusing citizens or working with criminals.”

Severe human rights abuses took place during Plan Colombia, including more than 3,000 extrajudicial executions by the U.S.-funded security forces. “The right choice is not to fund an abusive army. Whenever the United States provides support to security forces, it has an absolute obligation to press for compliance with international human rights standards,” says report co-author Lisa Haugaard of LAWGEF. Human rights conditions tied to security force assistance can help. “The human rights certification process has been extremely frustrating at times,” says Haugaard. “But at least it provided a forum for U.S. and Colombian human rights groups to raise serious human rights issues with the U.S. government, and that produced results in terms of resolving some landmark cases and reducing security force abuses.”

The report’s authors hope that it can clear up some all-too-common misconceptions about U.S. policy toward Colombia since 2000. “Because Colombia achieved some security gains for a while, there is a tendency to cling to Plan Colombia as a model for Mexico and elsewhere,” notes Haugaard. “But we must not misread our recent history and apply the wrong lessons. That is a recipe for disaster.”