A Journey, a Window, and a New Understanding: A Young Cuban-American Finding Her Identity

As a first generation Cuban American, I have grown up hearing a wide variety of stories and opinions about this mysterious island that my family originated from. Some from my grandmother, who would talk about the farm that she was raised on called “La Juanita.” She always told me how she loved to ride horses. My mother, who grew up in Havana, would recount stories about her childhood. One story that stuck with me was about how my grandfather made a makeshift window that looked out onto the street so that my grandmother, who was a nervous Nellie, could watch my mother and her sister play outside. None of these stories was particularly negative or positive, pushing my opinion to one side or another. Then there was a flurry of stories about a young boy named Elian Gonzalez, who was about my age. Kids in my elementary school would say, “Oh you’re Cuban like that Elian Gonzalez boy.” And, people were talking about a man named Fidel Castro, and how he was an evil dictator. All of this coming at me from peers, family, friends, and media outlets left me very confused. As a child, it made me feel like I was weird because my family came from this country that “everyone” said negative things regarding it. I knew I was Cuban, but I had no idea how that played into my identity. At that point, I did not really know what to think or believe about Cuba or being Cuban American… 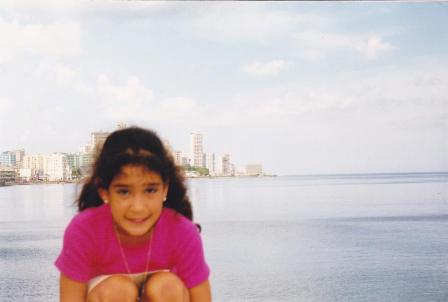 In 1999 I had my own experience in Cuba. I was eight years old, and this was my mother’s first time back since 1974 when she left the island to go to Spain. I was just excited to go on vacation, and all I would talk about was going to the beach because supposedly there was this amazing beach called Varadero that I was just “going to love.” While sitting on the plane I remember very clearly seeing in front of me a little screen that showed the plane’s progression across the Florida Straits. By the time the screen was indicating that we had reached our destination, my mom looked at me excitedly, with a smile on her face, tears welling up in her eyes, and said, “We are almost there.” I looked at the passenger next to her, and there was a Cuban woman of Chinese decent with the same emotions on her face. This was her first time back as well. It did not really hit me why my mother and this lady were crying until years later when the pieces of the bigger picture finally started coming together.

As a high school junior and senior living in Florida (not in Miami, as some would assume), I started wondering about what exactly I wanted to do with my life. I was interested in politics, and my own excitement surrounding the fervor of the 2008 presidential election put things in perspective for me: a profession in international relations and politics could be in my future. I began looking into different colleges and came across American University, where I learned that they had a study abroad program in Cuba. This was one of the deciding factors in choosing American University. During the spring of 2012, I applied to the Cuba study abroad program; and before I knew it, in August 2012 I was packing my bags and telling everyone I will see you in three and half months! I got a number of different reactions about my decision to study abroad in Cuba. Family friends in Miami were extremely confused and wondered why I would choose Cuba of all places. Some smiled and said, “I’m sure you’re going to have a great time,” when you could definitely tell they were just trying to be nice but they really disapproved. But I didn’t care. I was going to Cuba to find out what it’s really like. I wanted to get in touch with my roots, first hand, and form an opinion of my own, distinct from what the media or family and friends had to say. My mom and dad were thrilled and so proud that I was going to learn about where they came from and make my own opinion about things along the way. Even though I went to Cuba as a child, I didn’t really fully understand why things are the way they are. 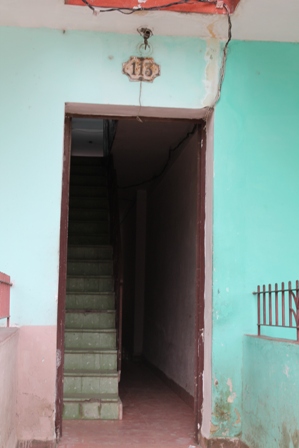 The old apartment of Karina’s Mom in HavanaDuring my time in Cuba, probably the best day that also hit the farthest home with me was finding 1) the apartment that my mom grew up in and 2) meeting her best friend from childhood. This discovery in and of itself was a journey, since this section of Havana had been re-named, as well as all the streets, since my mom had left Cuba. Thank God I had an amazing taxi driver that had the most patience in the world and even accompanied me going door to door asking people if they remembered my mother. Finally, after lots of conversations, an entire apartment complex made my search an affair; and everyone began helping me. I finally found my mom’s childhood friend, Esperanza; and it was the most amazing feeling in the world. I gave her a humongous hug, and she told me how she still had the letters my mom had sent to her from Spain! Esperanza kept saying how happy she was to see me and hear about my mother’s life in the United States. She then took me back to the apartment complex, and we went around towards the side of the building. As I looked around in between two short palm trees, I saw a window. Esperanza asked me if I knew what it was, and I smiled at her and said, “Yes, that’s the window my grandpa made to watch my mom and aunt play outside.” 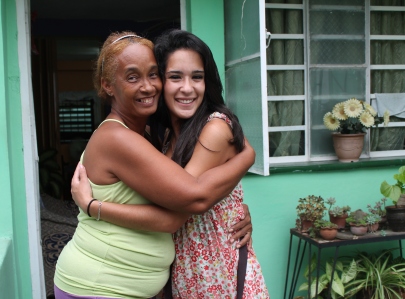 Thinking about my mom’s story and my own journey to Cuba, I’ve realized just how immigration and leaving Cuba works; and the window that my grandfather built reflects this process. The side of the window from inside the house looking out symbolizes the family that has stayed behind, and the view from the outside looking in portrays the families that have left. Like parents watching over kids, families left behind want to know all about the outside. They want to be able to tell everyone all the great things their daughters, sons, nieces and nephews are doing abroad. They are so happy for you. They constantly wonder how you are doing, while their lives stay stagnant, in the same routine. But from the outside, like kids do, you are so wrapped up in your own world, trying to make a life for yourself. Little by little in your new adventure on the outside, and as the years pass, you forget about the people that you’ve left behind and only remember them when you’re called upon to come back inside. My mom’s friend Esperanza probably never thought in a million years that the daughter of her childhood best friend would hop out of a taxi to meet her and give her a big hug 38 years later. But I guess every now and then curiosity happens, and people on the outside remember to look back through the window, back into their past. 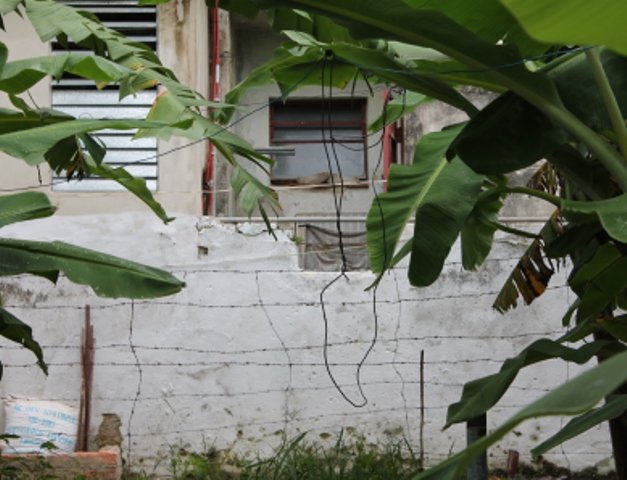 The window of Karina’s Mom’s old apartment in HavanaI encourage Cuban Americans, especially from my generation, to look back at the window and to climb through it so that they can form an opinion of their own. Get to know the real Cuba. A lot of things have changed since the time of our parents and grandparents, and within our lifetime we are going to see major changes come about in Cuban history. Take the time to form your own opinion about Cuba, find your identity, and only take what people and the media and in the United States tell you with a grain of salt. The truth is somewhere in the middle. Having an open mind will only bring you closer to the truth.