If you ask people in the Curbaradó river valley how they are doing, they will often say: “Aquí, luchando” meaning “here, struggling.” During the last several months I’ve been accompanying quite a bit in Curbaradó, and am beginning to understand why they say that.

Getting to Curbaradó in public transport (overcrowded jeeps) from Apartadó, the nearest city, is a 7 hour undertaking over terrible, bumpy roads. Along the road, we see extensive cattle farms, and to our left the mountains of the cordillera Nudo de Paramillo. Periodically, we pass army and police checkpoints. 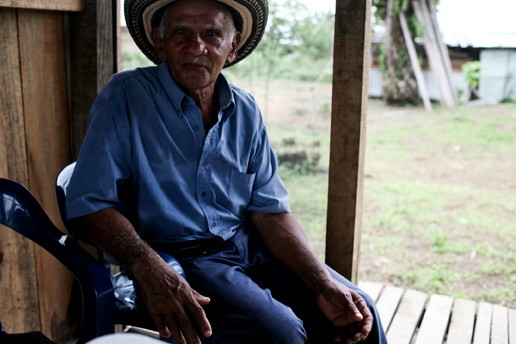 Arriving in Curbaradó, we visit the Humanitarian Zone of Andalucia, where we meet Don Petro. Despite his leathery, wiry black body, his unusual, bright blue eyes make him seem a lot younger than his 82 years.

His eyes shine brightly behind his thick yellowish spectacles while he gives us a broad, welcoming smile and a strong handshake. The rain brings us together with family members on a dirt floor under a corrugated iron roof, as chickens and pigs scratch around us.

Lands belonging to afro-descendants and campesinos (small-scale farmers) like Don Petro in Curbaradó were usurped at the end of the 1990s by military and paramilitary violence. These communities began to reclaim their land after a 1993 law granted Afro-Colombian and ancestral inhabitants the right to return. When the displaced communities of Curbaradó returned, they found their farms covered in enormous tracts of African palm plants and billboards of banana corporations claiming ownership of the land.

In an effort to protect themselves in their effort to reclaim their lands, the communities in Curbaradó created “Humanitarian Zones,” giving them a way to clearly differentiate between combatants and the civil population; in other words, to declare themselves neutral in the conflict. The nonviolent struggle of these farmers is not without risk: there is often retaliation for those who choose to speak out. Seven campesino leaders were killed in Colombia since last August, and three were killed in March alone.

Right now, in fact, there is particular concern for the safety of Don Petro and the other residents of the humanitarian zones. During the last few years, the Army’s 17th Brigade has provided perimeter protection to the humanitarian zones in accordance with protection measures issued by the Inter-American Court of Human Rights. But the soldiers retreated from their posts last week, leaving the families and particularly the community leaders to their fate. The community members are extremely worried about the Army’s withdrawal due to the presence of illegal armed actors in the Curbaradó basin.

Don Petro tells us with a smile that he belongs here. But it is not easy. Don Petro’s son, Junior, tells us that this season their maize crop has failed because of excessive rain and a rat infestation. They are facing hunger, also because the rice they recently planted has been flushed away by more rain. And there is the continuing problem of attempts by cattle ranchers and banana- and oil palm companies to re-usurp their lands.

We then take a motorcycle-taxi to a different Humanitarian Zone, Camelias, a pretty village of wooden houses, some two stories high with verandas. Within the fences of the Humanitarian Zone, young boys play football, and small girls come to greet us with a kiss. When I walk through the gate, Don Gustavo, an older man in Humanitarian Zone Camelias, at first does not recognize me although we have talked over coffee before. Later that night, he tells me awkwardly that he does not see much, and has no means to cover the cost of the eye operation he needs.

Don Gustavo is a man who carries much weight and respect, as he is one of the resistentes: those who did not flee from the area during the bombardments and the subsequent paramilitary occupation and usurpation of their land, but decided instead to survive in the mountains.

At night under the light of a diesel-generated bare light bulb, we receive a visit from Don Pedro and his friend Jairo, both resistentes, who tell us about their time in the mountains.

At first, Jairo did not want to flee from his village, but then the conflict worsened and more and more people where leaving the area. He decided to send his wife and children to Apartadó where more family members from his village had already settled. Then he went into the mountains and thought he would never be able to come back to Camellias, which is so close to Brisas, a paramilitary stronghold right across Camelias on the other side of the Curbaradó river.

In the mountains, Jairo and Gustavo met each other, and together they hid from the bombardments. They recall their time in the mountains as a very difficult time with much suffering. They had nothing to eat, feared for the fate of their families, and slept on the forest floor.

When you look them in the eyes, you see something more profound than sadness: the necessity to understand the “why?” and know the causes of all that has happened to them. These campesinos follow world politics on their transistor radios, and are actively trying to find meaning behind the atrocities that they have suffered.

These are real survivors under harsh circumstances, living a fairly hand-to-mouth existence. Seeing their living conditions, and hearing their stories, inspires deep respect. I am certainly not sure I would have the strength to do the same as they have had to do to survive.

This piece was orginally posted on Peace Brigades International Colombia’s blog. To read this and many other good posts on their blog, click here.