With unions from the Americas and Europe, the AFL-CIO is participating in the 6th Congress of the Central Union of Workers (CUT) Colombia, the country’s largest labor federation, from Sept. 23–26. The congress takes place as Colombia moves forward with a negotiation and peace-building process to end a 50-year conflict that has killed more than 170,000 civilians. The armed conflict has been used by the government for decades to systematically deny basic labor and human rights. More than 3,000 trade unionists were murdered by paramilitary, government and armed guerilla forces for exercising fundamental labor rights since 1987. In spite of strong recent economic growth, Colombia continues to have the third highest social inequality in Latin America after the much poorer countries of Haiti and Honduras. Any sustainable solution to this long-term crisis must include respect for workers’ rights and shared prosperity. 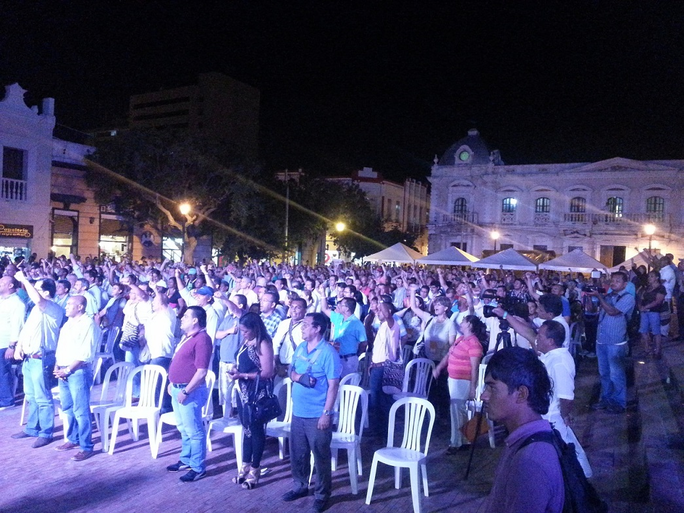 CREDIT: AFL-CIOBecause of considerable impact of U.S. foreign and trade policy, the United States has a particular responsibility and the AFL-CIO has a strong commitment to ensure that Colombia protects human rights and complies with commitments to improve labor laws and their enforcement in the U.S.-Colombia Labor Action Plan (LAP) and subsequent U.S.-Colombia Free Trade Agreement. In this context, 1,200 worker delegates, labor leaders and allies in Colombia and the global labor movement are debating and evaluating the many promises and plans made to guide Colombia’s transition from violence and radical inequality toward peace, social justice and inclusion.

For the labor movement, the LAP remains an unfulfilled set of good intentions. The LAP was poorly conceived since it included no verifiable benchmarks to measure conditions faced by workers attempting to exercise rights and offered no mechanism linking compliance with access to trade benefits made possible by the trade agreement. Nonetheless, Colombian unions and the AFL-CIO delegation this week in Colombia reaffirm their consensus voiced six months ago that while the LAP will not resolve the many failures to protect and respect labor rights, the LAP must be extended until it is fulfilled. Since the LAP has no enforcement mechanism, the Colombian labor movement and its allies have also been documenting cases demonstrating the systematic failure of the Colombian government to enact and enforce laws consistent with the binding commitments contained in the U.S.-Colombia Trade Agreement that entered into force more than two years ago. While an improved and renewed LAP could serve the purpose of addressing some violations of the trade agreement, many Colombian unions and their allies are considering seeking enforcement through the mechanisms included in the U.S.-Colombia Trade Agreement.

While Colombia has failed to fulfill the commitments it made in the LAP or take advantage of recent economic growth to reduce inequality, the country is also currently seeking membership in the Organization for Economic Cooperation and Development (OECD). Along with their Colombian allies, the international trade union movement and broader civil society are demanding that Colombia finally fulfill the commitments agreed to in the LAP and recommendations of the ILO, as well as improve its environmental protections before being granted OECD membership.

At the same time Colombia’s largest labor federation and its allies are debating these issues, the Colombian Ministry of Labor will soon travel to Washington to discuss once again the commitments made well over three years ago as part of the LAP and discuss its renewal. Only six months ago, both the Colombian and U.S. government conceded that much work remains to be done regarding the central commitment of the LAP—to eliminate forms of hiring that deny workers their rights through subcontracting schemes that increase informality and remove accountability from the employment relationship that is necessary to guarantee respect for fundamental labor rights.

As Colombian and international delegates this week in the Congress of the CUT have repeatedly stated: In spite of many public relations efforts and cosmetic changes to laws, the Colombian government cannot show results in creating formal employment. Whether it is through the obligations of the LAP or the enforceable mechanisms of the numerous trade agreements that Colombia has signed, Colombia’s transition will be incomplete until these commitments are honored. These are minimum requirements, a more complete program to build sustainable peace in Colombia includes a broader set of reparations to those diverse communities affected by the decades-long conflict, suffering its violence while the state has nearly always allowed those responsible to enjoy impunity.