As I pushed an old flamboyantly-painted yellow school bus down the streets of Havana in front of the U.S. Interests Section and a billboard exclaiming “Venceremos!” (We will overcome), I realized how privileged I was to spend a week in a country so mysterious to U.S. citizens, and so troubled, yet filled with beautiful, smart, and passionate people. I don’t pretend to believe that I could possibly understand Cuba in one week, but I can say that after visiting the island only 90 miles from the Florida Keys, I am a better person, I think more critically about what I am told, and I see the connection between the U.S. and Cuban people as a connection worth fighting for. 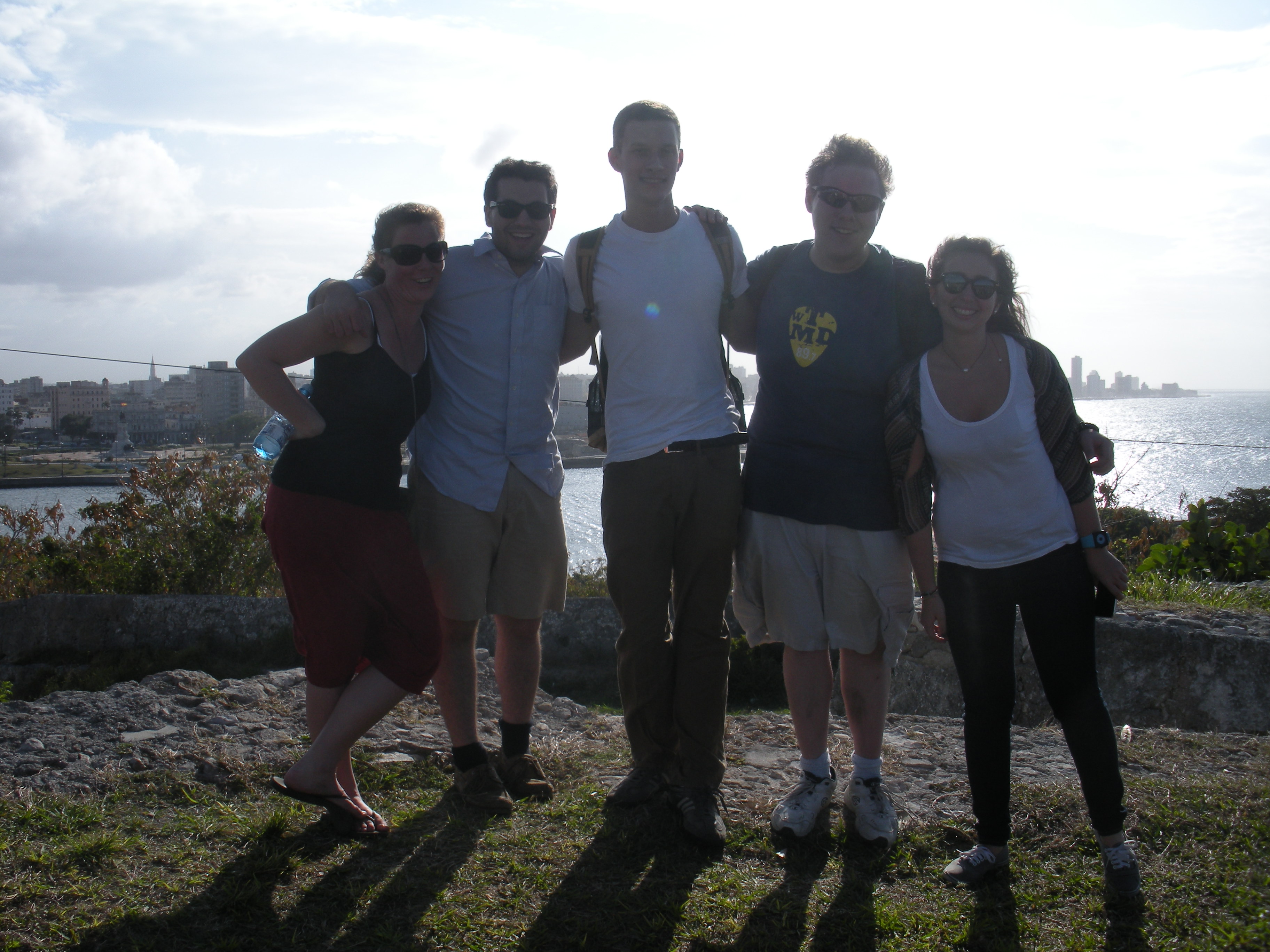 The fact that this trip came to fruition is a testament to the drive and commitment to hands-on learning that I’ve come to love at American University. One year ago, International Training and Education students Monica Shah and Jessica Guttenberg were challenged to design an alternative break program for Illana Lancaster’s Education for International Development class. Unsatisfied with simply creating a trip that would fulfill the assignment, Monica and Jess set out to create a trip that would give AU students key insights to a country many Americans still disregard through the universal lens of education.

Little did they know, they would spend the next 14 months planning, organizing, making calls, and interviewing candidates for what became American University’s most popular alternative break trip ever, attracting 65 candidates for just 13 spots. 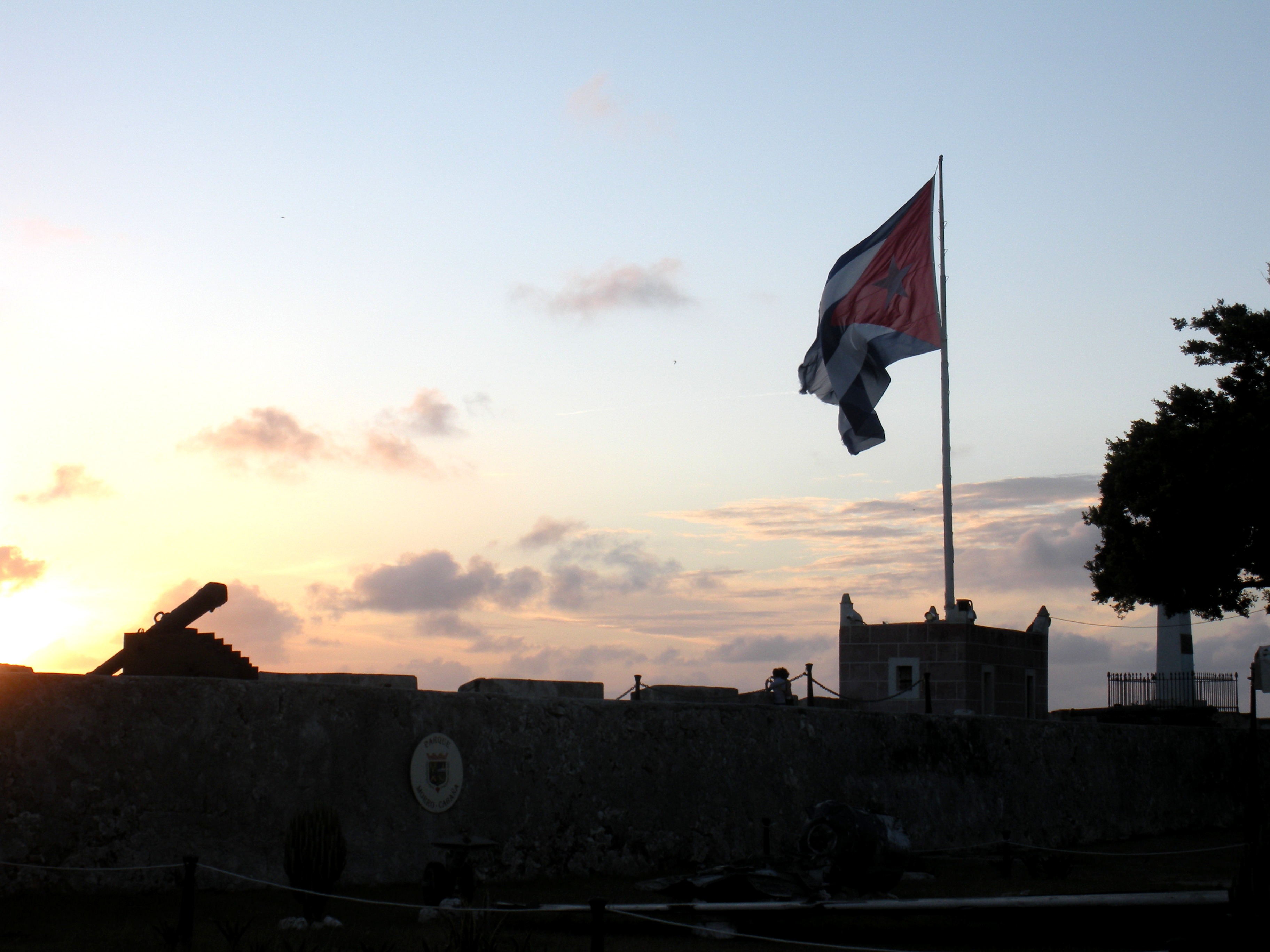 Photo by Josh Halpren: The Cuban flag at sunset from El MorroI am not the least bit ashamed to admit that I cried more times during the week I spent in Cuba than I think I have over the course of any other experience. In a country that every day deals with the effects of a United States trade embargo, what Cubans call “the blockade,” I felt, as an U.S. citizen, very welcomed and part of a community, where I was respected for who I was, not just what country was on my passport. Cuba is a confusing country. It is an emotional country. But fundamentally, Cuba is a country filled with real people and with real joys and challenges, and the week I spent there taught me more about people than I’ve learned in quite some time.

Edelso, our translator, a University of Havana professor, accompanied us throughout our trip and provided a glimpse into the life of a professional in Cuba. He told us about his work as a translator and the amount of time he spends translating for groups such as ours and other companies to supplement his work as a professor. While I know he had a great time traveling alongside us throughout Havana and to the Matanzas province, the time he and other Cubans spend away from their families as they try to scratch out a living is hard to fathom. In the United States, we see a professional job as the end goal because it is our means for a good, stable life. In Cuba, this isn’t always true. One job may not be enough and there may be more work to do than there are hours in the day. But the Cuban people do it. They work every day to provide for their country and for their families. Life is not easy, but it’s life.

Towards the end of our trip, we visited the Latin American Medical School. Drawing students from across the world, the school provides students with a medical education based on the needs of their home countries, as well as room and board free of charge. Perhaps most surprising, this includes students from the United States. After meeting a member of the school’s administration, we were privileged to meet three Americans studying medicine in Cuba. One, who had grown up in a range of states in the southern part of the U.S., expressed her desire to work on public health issues in the “deep south.” Once she completes her medical education in Cuba, she will complete her residency and other requirements in the United States. In fact, the medical school requires students to return to their home countries. Cuba is actively training American students, who would have otherwise not been able to attend medical school or would have had to take out a monstrous amount of debt to do so, to serve their communities in the United States. And they do this free of charge.

If there is one thing that shapes Cuban identity it is the value placed on education. As we met teachers, administrators and students I began to see the power of education as a universal lens for understanding national culture and values. At a primary school we visited, the principal explained the structure of his school as he stood under the national seal of Cuba and portraits of President Raul Castro and former President Fidel Castro. “I hear some of you are teachers or training to be teachers!” he said excitedly. A few of us nodded our heads. “Well, then we are among colleagues.”

As we explored the school, the influence of the Revolution was undeniable. Posters and murals implore children to “be like Che.” But as I watched one of my trip-mates, a first grade special education teacher and AU graduate student, as he slipped into his element, making immediate connections with students with whom he shared neither language nor culture, it became undeniably clear to me that despite cultural or political differences, there is something universal about schools, about teachers that draws those of us who dedicate our lives to children, or plan to, together in a way that no other profession can claim. Whether it was at this primary school, or the secondary school we visited, it was clear to me that a love and passion for education will always work to unify peoples.

I will forever be thankful for the fact that unlike many who come to Cuba for tourist or educational purposes, our group did not stay in one of the new luxury hotels of Havana. Instead, we spent our week at the Martin Luther King Jr. Memorial Center located in Marianao, a working-class, largely Afro-Cuban neighborhood of Havana. The King Center, which is attached to a Baptist church, was designed to lift up a community through the popular education models of Brazilian education theorist Paolo Freire. Freire’s models, which emphasize the importance of understanding what communities need in order to give them the most help, drive the King Center to complete its work. Each and every person I met who came in and out of the center seemed as gracious and thankful for its presence as they were to see that people from the United States weren’t there just to dispense “help,” but to learn about their country and to take knowledge of its realities back home with them.

On one of our last nights in Cuba, two of my trip mates and I sat on the steps of the King Center discussing the work we were doing back home, how much we needed to go to the gym after eating amazing 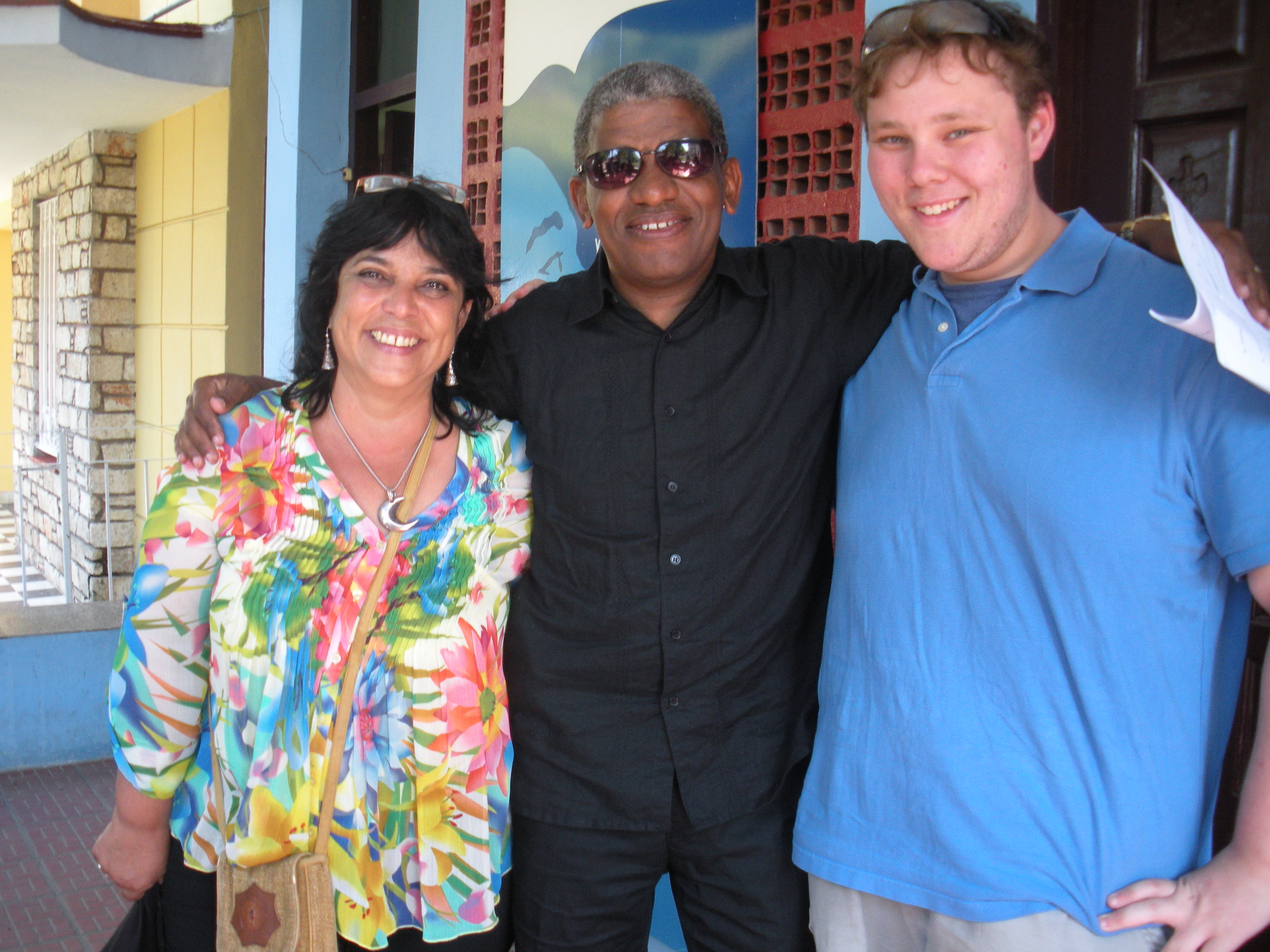 Photo by Josh Halpren: Friends made at the MLK Center, Rita and EdelsoCuban food for a week, how much we’d loved being able to speak Spanish every single day. As we sat on the steps of the center, Julio, one of the center’s night watchmen, came out to make sure we were all right. As we asked him about his day and how long he had worked at the center, Julio asked us what we thought had been the best part of the trip so far. We told him about how kind people had been and how surprisingly welcoming people were to Americans. We told him how the students at the schools we’d visited had openly asked us questions about the United States and about our experiences, and had answered every question we had about them. We told him how amazed we were at the ability of the Cuban people to separate a people from their government.

Julio paused for a minute and then spoke. “I have a story for you,” he said. “A boy and his father were climbing a mountain together when they got into an argument. To give him some space, the father walked a bit ahead from the boy. As the father walked away, the boy shouted, ‘I hate you.’ The sound echoed through the air and the boy heard the mountain shout back, ‘I hate you.’ The boy was frightened and shouted again, ‘I hate you,’ only to hear the mountain shout it back at him again. Hearing this, the father returned to his son. The boy, frightened, ran to his father. ‘The mountain hates me!’ he said. ‘We can’t stay here.’

Julio paused for a moment and looked at the three of us as we sat there, mesmerized by his story. As we sat there for the rest of the night, we talked about life in the U.S., our families, and our friends. But it is this story and the stories of all the people I met over the course of the week that make me believe that it really is what we shout at the mountain that determines what’s going to be shouted back. If we shout hate, we will only receive hate. But if we shout love, we will receive love.

It’s appropriate that we spent our time in Cuba staying at a center named after Dr. King. Dr. King’s love for people, and for human dignity, is what changed America during the Civil Rights Movement of the 1960s. It is the love and the passion that we as American and Cuban peoples can feel that will make things better between our two countries. It is this love that will allow our two governments to sort out their differences and to resolve a rivalry the next generation isn’t willing to maintain.

Josh Halpren is a third-year student at American University in Washington, DC where he is double-majoring in Interdisciplinary Studies (Communication, Legal Institutions, Economics and Government) as well as Secondary Education and pursuing a Certificate in Advanced Leadership Studies. For more information about the Alternative Spring Break program at American University click here.