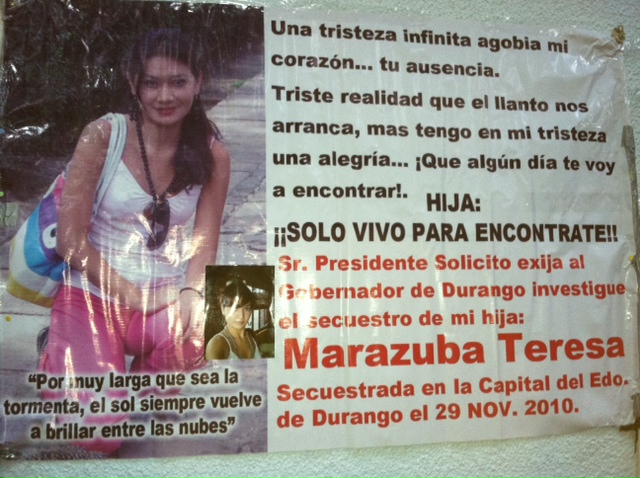 “An infinite sadness overwhelms my heart..your absence. This sad reality moves us to weep, but within my sadness is a happiness that someday I will find you! Daughter, I only live to find you.”

This was one of many homemade signs hung by victims on the walls of the high school auditorium where victims of violence and human rights activists from Mexico, Canada, and the U.S. gathered in Mexico City last month to take stock and chart next steps for Mexico’s Movement for Peace with Justice and Dignity (MPJD).  Before discussions started, Father Solalinde, a Catholic priest well-known for his valiant efforts to protect migrants at a shelter in Oaxaca, reminded us all of the urgency of this effort, calling us to “ponernos las pilas,” to buckle down and focus on moving the effort for peace and justice forward…

LAWGEF was honored to have the opportunity to join in this process and speak with many of the friends and familiar faces we came to meet when we jointly hosted the Washington, DC leg of the MPJD’s cross-country caravan this past September.  Many of the caravaneros we caught up with reflected on their experiences in the caravan, noting that meeting the people of the U.S. with shared stories—losing children to gun violence and communities harmed by illogical drug policies—made them realize that the problems spanned the border—so the solutions must as well. Many were touched by the countless communities across the U.S. that opened their hearts and minds to the suffering of those in Mexico where a staggering 100,000 have been killed since 2006 and an estimated 24,000 people are missing.

The three days of  plenaries and working groups were designed to take into consideration the diverse range of opinions and experiences of participants, something truly to be admired and very unique to a social movement.  Pauses in the program were interspersed with chants, reminding us of the collective dedication by victims and allies to find answers and justice for their missing and murdered loved ones.

Despite this determination, not one of the victims we spoke with could report any progress by authorities in the cases of their loved one’s death or disappearance.

With the national debate on how to reduce gun violence gaining attention in the halls of Congress, the victims’ stories once again reminded us that the impacts of lax U.S. gun laws reach far beyond the border. Not only have roughly 70 percent of firearms found at crime scenes in Mexico originated in the United States, but researchers from NYU suggest that the end of the Assault Weapons Ban in 2004 led to an increase in homicides in Mexican border cities. As part of their effort to continue pushing for firearms regulations in the United States, the MPJD issued a statement of support for President Obama’s proposals to stop the epidemic of violence with firearms which afflicts communities on both the United States and Mexico, calling for “people of both countries to support these changes that are so urgent for preventing more atrocities with firearms.”

Following days of lively discussion, the MPJD members and allied organizations decided to move forward with the following priorities:

•    Raising awareness of the tragedies of Mexico’s victims of violence
•    Defending indigenous territories
•    Supporting the regulation of firearms sales
•    Guaranteeing  the full implementation of the General Victim’s Law (Ley General de Victimas)
•    Continuing to foster an international debate concerning the treatment of drug production, use, and trafficking
•    Seeking the implementation of a new Human and Community Security strategy
•    Recovering their historical memory as part of their convictions in regards to accessing truth and justice

These priorities are more fully described in statements issued by the MPJD at a concluding press conference.  To read them, click here.

In the coming weeks, as you listen to the debate on preventing gun violence, and you contemplate whether our policies have repercussions abroad, remember the parent in Mexico who only lives to find their daughter. During this period of transition we look forward to working with the Movement for Peace with Justice and Dignity—and the many mothers, fathers, brothers, and sisters whose lives have become a constant search for truth and human dignity—in their ever evolving quest for peace and justice on both sides of the border.