Autodefensas, Extortion, and the Breakdown of the Rule of Law in Michoacán

Frustrated by the failure of authorities to ensure security and rule of law in the face of rampant extortions, kidnappings, and killings, civilians in cities and towns in western Michoacán have formed self-defense militias, known as autodefensas.  These autodefensas, loose collections of businesspeople, returning migrants, and ranchers — have focused on driving a quasi-masonic drug trafficking organization, the Knights Templar, out of the region.

In a significant victory for the autodefensas, the Mexican government decided not to force them to disarm after sending thousands of soldiers and federal police to Michoacán. Instead, members of the groups have agreed to register with the federal government and become incorporated into the Rural Defense Corps. Historical Mexican leaders, including Benito Juárez and Porfirio Díaz, have accepted the role of autodefensas in the past to provide citizen security and combat crime. 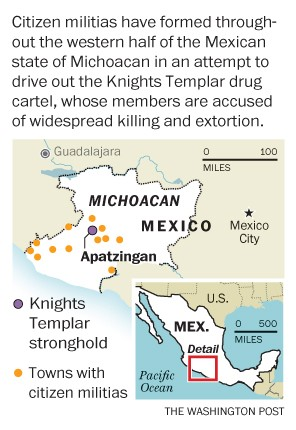 Ioan Grillo, author of El Narco, interviewed a member of an autodefensa last Tuesday. Josué Benítez, a former construction worker who was recently deported from the United States, told Grillo “Protegemos a las mujeres ya los niños de la amenaza de los narcos. [We protect women and children from the threat of narcotraffickers.]”

He said that the government is supportive at the moment, but he believes the support will not last long. Government officials, echoed by claims in the media, have accused the autodefensas of accepting arms and monetary assistance from the remnants of a rival Michoacán cartel known as La Familia.

Josué grew up in a poor neighborhood and became involved in organized crime because there were few other employment opportunities. He left for the United States and began to lay drywall in San José, but was deported for a DUI. When he returned to Michoacán, he found his native city overrun by Templar extortion rackets. The plight of Josué is a familiar story. Deportations, especially to Michoacán, have risen sharply between 2009 and 2012.

Many human rights organizations see the surge of autodefensas as a result of institutional failures by state and municipal governments to ensure rule of law and citizen security; tensions are further exacerbated by the militarization of the region. The Mexican National Network of Human Rights Organizations, expressed concern that state and federal militarization was exacerbating the security situation, not improving it:

“…The governmental response [to the extreme violence] has been to continue with a strategy that has shown itself to be a complete failure: the militarization of public security bodies and the deployment of the army to the streets, which has not only failed to achieve peace in the region but has exacerbated the fear, violence, and human rights violations suffered by the civilian population. The federal government has now taken the further step of apparently dissolving, de facto, various state government powers, by designating a Federal Commissioner for the Security and Development of Michoacán, as well as the heads of the Attorney General’s Office and Public Security Ministry of the state, in response to the collapse of these institutions.”

The Peña Nieto Administration has pledged to provide nearly $3.4 billion in investment to support infrastructure and community development in Michoacán. Mexico’s Interior Minister, Miguel Ángel Osorio Chong, detailed a three part plan to restore security in the state. The first stage involves federal security forces restoring control over 27 municipalities. The second stage involves community and social development as part of federal aid packages. The third stage involves restoring and bolstering the role of Michoacán state institutions, which have largely succumbed to the influence of narco-traffickers.

Some commentators have raised concern that this targeted crackdown by the government could create a “cucaracha effect,” in which organized crime will just pop up somewhere else if driven from Michoacán. Although this is not a legitimate reason to withhold resources from Michoacán, it speaks to the dire need to strengthen institutions across Mexico.

An in-depth discussion about the current security situation in Michoacán can be found here.