Ayotzinapa: Where Are Our Disappeared?

“Mexico is a tomb…. Where are our disappeared?” – Leticia Hidalgo, son was disappeared by men dressed as municipal police in Nuevo Leon (pictured below, third from the left) 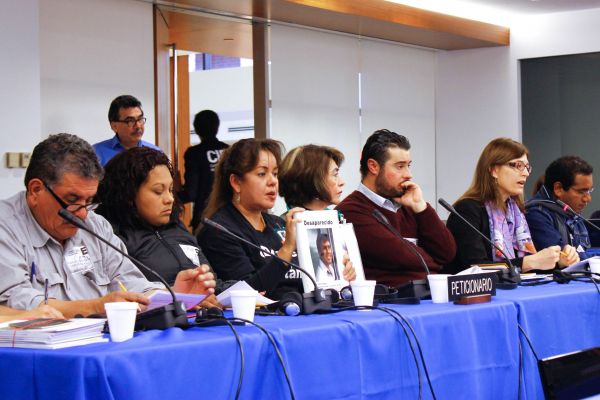 Over seven months have passed since 43 students from a rural teachers college in Ayotzinapa, Guerrero were forcibly disappeared in the town of Iguala, yet many questions about the case remain unanswered. We know that students were attacked by local police, who allegedly turned them over to a local criminal group, the “Guerreros Unidos,” to be killed. To date, the remains of only one student have been identified. The Latin America Working Group is joining with our Mexican human rights partners and the families of the disappeared to say that these lives matter and justice must prevail.

Although over one hundred people have been arrested in the case, there have not yet been any convictions—and families have expressed concern that official investigations are not doing enough to uncover the role that corruption and collusion at high levels may have played in their loved ones disappearance.

In late January, President Peña Nieto, whose approval ratings had plummeted to an all-time low, attempted to dismiss questions regarding the Ayotzinapa case and urged his country to move past it saying, “We cannot remain trapped in this sad moment in our history.” Subsequently, Mexico’s attorney general announced that the government would be concluding their investigation. Frustrated students’ families resoundingly rejected the announcement, presenting a list of clear arguments why the case should remain open, underscoring that the government´s line of investigation was not backed by the scientific evidence, and the government had failed to scrutinize the involvement of higher-level authorities, including security forces. Just a few weeks after the Mexican government was concluding its investigation, the Interdisciplinary Group of Independent Experts (GIEI), an international team selected by the Inter-American Commission for Human Rights (IACHR), began their work, which includes “the development of search plans to find disappeared persons while alive; technical analysis of the lines of investigation to determine criminal responsibilities; and technical analysis of the Comprehensive Plan for Attention to the Victims (Plan de Atención Integral a las Víctimas) of the events of September 26 and 27, 2014.”

Given the profound shortcomings of the Mexican authorities’ investigation into the disappearance of the 43 students, the attorney general’s announcement that the case was closed came as a shock to the people of Mexico and the broader international community interested in ensuring that the investigations were serious, respectful of the suffering and expectations of justice of the students’ families, and free of political influence. LAWG and human rights partners issued a statement urging the Mexican government to fully support the Group’s work and fully implement its recommendations.

The Group’s public report from its first visit in March included requests that Mexico continue the search for the missing students; ensure the preservation of evidence; and provide medical attention to the students’ families and Aldo Gutierrez, the student who remains in a coma for the injuries sustained during the September attack.  Its second visit in April included interviews with families of the Ayotzinapa students as well as with 16 individuals detained in relation to the case.  Though it will not make the exact information public, the Group announced that it had presented information to the Mexican government for it to “open new lines of investigation and amplify those already existing.”

Although then Attorney General Murillo Karam cited the disappearance of the students as “atypical,” communities across Mexico know it is far from an isolated case. The initial search for the students uncovered dozens of other mass graves in just the surrounding areas of Guerrero. As Leticia Hidalgo, the mother of a college student who disappeared in a separate instance in Nuevo Leon, expressed in the IACHR hearing on disappearances in Mexico, thousands of families are left in limbo while they do not have closure on the cases of their disappeared children. The government’s own figures cite over 23,000 missing. Justice for the disappeared students is a critical step towards addressing a much greater crisis of disappearance and rebuilding the social fabric of Mexico.