#Ayotzivive: Three Years without Justice for the Missing 43 Students 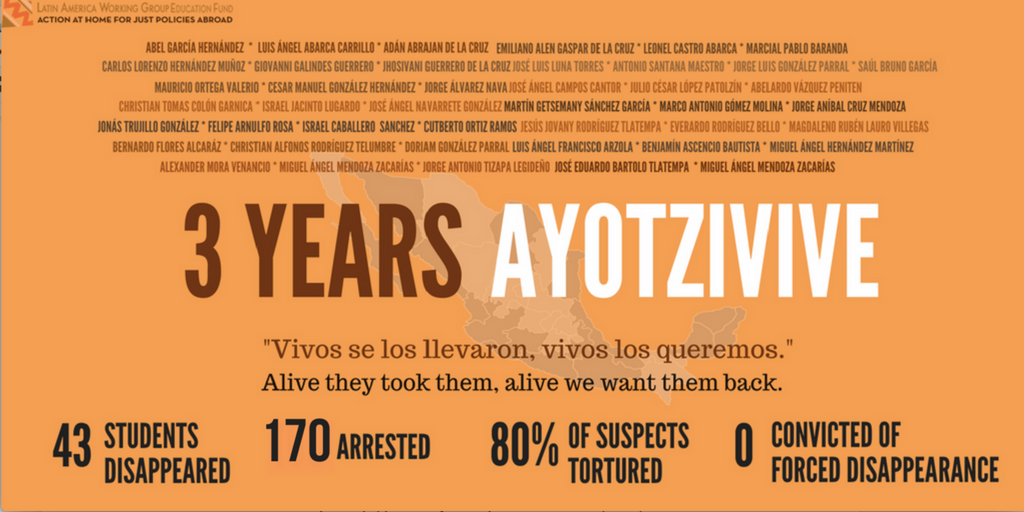 “Vivos se los llevaron, vivos los queremos“—Next Tuesday, September 26th, marks the third anniversary of the disappearance of the 43 Ayotzinapa students in Mexico. In remembrance and in solidarity with their families, we’ve created this toolkit with actions you can take to protest the lack of progress on the case and demand #JusticiaParaLos43 >>

For three years, the students’ families and friends have demanded justice to no avail. For three years, the Mexican government has stuck by its “verdad histórica,” even though international experts have debunked their version of the story time and time again. For three years, authorities have made over 170 arrests in connection to the case without a single conviction.

Three years have passed. Yet we still don’t know what happened to the students. What we do know is that enforced disappearances at the hand of security forces and other high-level authorities are not uncommon—they’re part of an ongoing human rights crisis in Mexico.

And that’s why we can’t forget the 43 normalistas. Or the thousands of other disappeared individuals in Mexico that continue to suffer on the Ayotzinapa case’s third anniversary. Years may have passed, but our demand for justice will. not. fade. TAKE ACTION >>

We must hold the Mexican government accountable. And we must also denounce our own government’s involvement through assistance to Mexican security forces. And we’ll do just that—by increasing international pressure and speaking out against these human rights violations.

Our toolkit isn’t the only resource we’ve been working on to help you take action. Check out this Facebook Live conversation we held with the Centro Prodh, one of our partners in Mexico and one of the leading human rights organizations accompanying the families of the students, to hear first-hand about what this anniversary means for the parents, the lack of progress on the case, and more actions to remember. View the recording >>

P.S. You’ve probably heard about the damaging earthquake that wreaked havoc on Mexico this past Tuesday. And now the country is in dire need of help. One nonprofit rescue force, the Topos, is doing just that. They’ve been working day and night again, as they did when they were first founded after the massive earthquake in 1985. But they can’t do much without your support. Donate to Topos here >>