It was a beautiful day in Bogotá, Colombia. It had not rained at all and the sun was shining with no clouds. Taking in the beautiful sunshine and enjoying the chilly yet comfortable temperature, my colleagues and I sat in a beautiful park in downtown Bogotá and discussed our upcoming meeting with ASOTRECOL, the Association of Injured and Ex-Workers of GM Colmotores de Colombia. After a brief intro into their labor plight and subsequent firings, we hailed taxis and made our way to the U.S. Embassy.

As we got out of our taxis, we were greeted by the pleasant smile of Jorge Alberto Parra, eagerly awaiting our arrival to tell us his and the rest of ASOTRECOL’s story. Set up in front of the U.S. Embassy in protest following the government bailout that made the U.S. government a major shareholder of GM, Jorge welcomed us to their tents.

“Welcome, please make yourselves feel at home,” Jorge invited us as he gingerly walked over to the tents with his cane to pick out some chairs for us. Manuel Ospina, Carlos Ernesto Trujillo, and Pedro Pablo Rincon soon joined Jorge in telling us their captivating story. 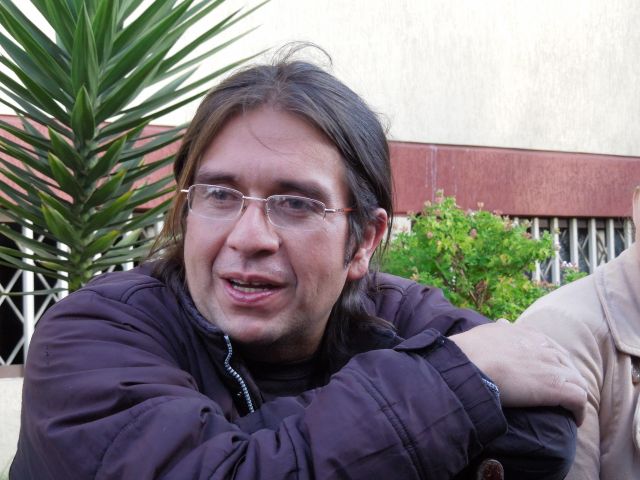 “We all have responsibilities, kids, so we have to look for money to support our families; we have no healthcare or other benefits.”

All the workers we met with suffered work related injuries that prevent them from working, whether at GM or elsewhere. Work injuries, such as carpal tunnel and rotator cuff syndrome due to repetitive motions and herniated and bulging disks from lifting and operating heavy machinery, have left the workers with limited income possibilities. They walk cautiously and slowly, often with the help of a cane. Such is the case for Jorge and Manuel.

ASOTRECOL’s protest against GM is centered on the complaint that the company systematically fired workers as the company’s doctors detected and diagnosed their injuries. Attributing these injuries to everyday life, GM’s failure to recognize these injuries as work related has left ASOTRECOL’s members without compensation and treatment. “As individuals they are isolated cases. But together they show there is an ergonomic risk at GM.”

Since August 2, 2011 when these workers set up their tents in front of the U.S. Embassy, members of ASOTRECOL everyday ask that their rights be recognized and that GM improves the working conditions of the plant to prevent current and future workers from developing the same injuries affecting those sitting outside in protest.

Along with their claims for due compensation and healthcare, ASOTRECOL demands that GM institute reforms to the assembly line that includes the rotation of workers to avoid repetitive movements as well as new equipment that limits the stress placed on the bodies of the workers. Another important demand is occupational re-training so that they can be reintegrated into GM and work in some way that will not affect nor worsen their occupational injuries.

While GM has taken several positive steps, such as the rotating of workers in the assembly line and instituting a re-training program, ASOTRECOL’s members have not benefitted from these changes. “GM has stopped firing sick workers, because they would immediately come here to protest. Instead, now they are transferring them to different positions in the plant. GM is doing the re-training but has not included us in it,” Jorge told us with mixed emotions. He was happy for the better treatment of the current workers, yet felt left out. 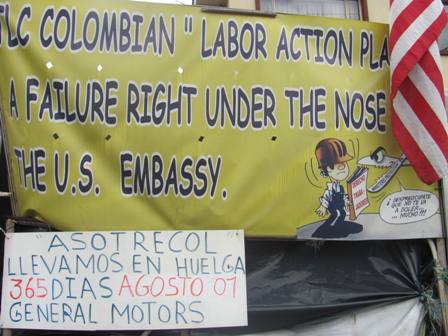 Banner hanging outside the tents. Credit: ASOTRECOL.Having spent almost a year outside of the U.S. Embassy, members of ASOTRECOL have consistently pressured for action from the U.S. The government bailout that kept GM from going under, along with the push for the Free Trade Agreement (FTA) between the U.S. and Colombia that produced the Labor Action Plan provide a platform for ASOTRECOL’s call for justice. The Labor Action Plan calls for the strengthening and implementation of Colombian labor laws, as well as the protection of union members.

The inaction of the U.S. has not been lost on the workers protesting outside the embassy. “It’s illogical that the same ambassador in Colombia is saying the Labor Action Plan is pushing for labor rights when a corporation, owned by the U.S. itself, is doing this to workers. So we set up the tents outside the U.S. Embassy.”

As the sun began to set and the comfortable afternoon temperature began to shift into a typical chilly Bogotá night, many of the workers present began to complain of how the cold affects them. Spending the night in a tent with no running water, no electricity, no heat and a makeshift kitchen would present an uncomfortable situation for just about anyone. However, for these workers, several of them with metal rods holding their injured bodies together, the cold Bogotá night presented them with another reminder of how costly their jobs have been on their physical wellbeing. 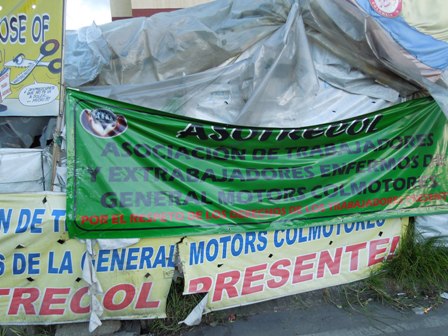 We said our goodbyes and thanked them for sharing their stories with us. The members of ASOTRECOL kindly invited us to join them as they celebrate their first anniversary in their tents outside the U.S. Embassy. Little did we know that one week after meeting with them, Jorge, Manuel, Carlos, and Pedro would commemorate their first anniversary of protest with a hunger strike, symbolically sewing their mouths shut as they continue to ask for justice.

ASOTRECOL has petitioned GM for compensation, medical benefits, and retraining or reintegration into the company. Click here to demand justice for Jorge and other members of ASOTRECOL!