Brazil’s human rights situation is quickly deteriorating with each passing day. And indigenous and Afro-Brazilian communities and leaders are right in the eye of this violent storm.

Since his election, President Jair Bolsonaro has attacked, both with words and actions, the collective and individual rights of Brazil’s civil society. His administration has especially targeted indigenous and Afro-Brazilian communities, threatening their claims to land and environmental protections and turning a blind eye to violence against them.

Indigenous and Afro-Brazilian communities are sounding the alarm. Will you join us in responding to their call? >>

President Bolsonaro has proudly said that “there won’t be one square centimeter of land designated for indigenous reservations” under his administration. Already leaders of Quilombola communities—that is, settlements founded and organized by escaped slaves and their descendants—have decried the dramatic 85-percent decrease in the Quilombola land titling budget.

The situation is bleak. And Brazilian activists say it’s only going to get worse. That’s why we must act NOW! >>

In response, Rep. Hank Johnson (D-GA) and freshman Rep. Deb Haaland (D-NM) started circulating a “dear colleague” letter in the House expressing deep concern for these attacks on the rights of indigenous peoples and Afro-descendant communities in Brazil. The letter urges Secretary of State Mike Pompeo to hold the Bolsonaro Administration accountable by communicating directly with Brazilian authorities and publicly denouncing these human rights violations. It also calls on U.S. diplomats in Brazil to voice support for threatened activists—including environmental defenders and indigenous and Afro-Brazilian leaders—and to demand swift action in the investigation and prosecution of emblematic cases of political violence, such as the assassination of Marielle Franco, the 38-year-old activist who campaigned for the rights of women, LGBTI persons, and favela residents.

Here’s where you come in. Follow the steps below to make sure your representative signs onto this crucial letter. Then, help us spread the word to get even more people to take action!

Emailing is great, but calling your members of Congress is the best way to get them to listen to you! You can use the script below as a guide:

Script: “Hello, my name is [YOUR NAME] and I’m a constituent from [YOUR CITY]. I’m calling to urge [YOUR REP’S NAME] to sign onto a dear colleague letter on the deteriorating human rights situation in Brazil, especially for Afro-Brazilian and indigenous peoples. Please contact Rep. Hank Johnson or Rep. Deb Haaland’s office to add [YOUR REP’S NAME] to the letter. The letter closes on Monday, April 22, so please make sure to sign on before then. Thank you for your time and attention!” 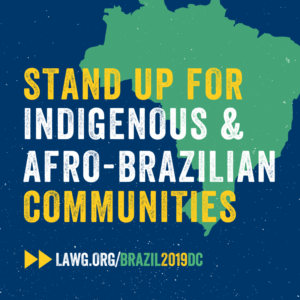 Thank you for all you do to uphold human rights and justice! Your dedication and passion really do make a difference.

Urge Your Representative to Oppose Controversial Projects in Honduras!