We are often telling you about the dangers faced by Colombian human rights defenders—the email death threats and terrifying phone calls, the funeral wreaths labeled with their names sent to their homes, the trade unionist or land rights activist shot dead.

But there is also much to celebrate in the creativity, bravery and dedication of Colombia’s human rights community.  And celebrate they did in September 2012, as Colombian civil society leaders and the international agencies coalition DIAL (Inter-Agency Dialogue on Colombia) launched Colombia’s first national human rights prize.

I had the great honor and delight to be one of the judges.  What a difficult decision it was to choose from among such amazing leaders and organizations!

This year’s winners were: 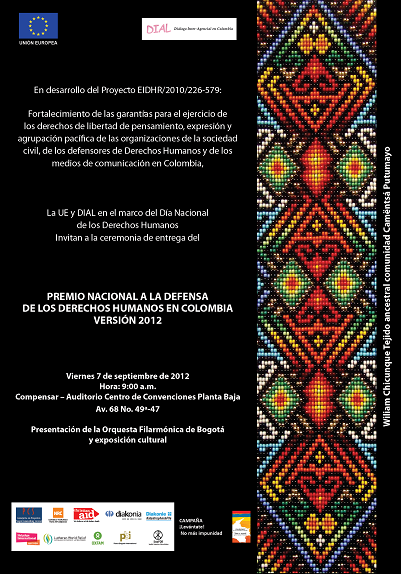 Colectivo de Abogados José Alvear Restrepo (CCAJAR) won the “collective process” award for its tenacious team of lawyers, who pursue justice on behalf of Colombian victims of violence.  The very  fact that they are winning high-profile cases against high-level military officials has provoked more threats and attacks against them.  But they are indefatigable in their pursuit of justice via every possible mechanism, from Colombian local courts and the Constitutional and Supreme Courts, to the Inter-American Human Rights Commission, the Inter-American Court and the International Criminal Court.

Judith Maldonado won “Defender of the Year” for her work defending the rights of campesinos, indigenous people, women, and young people in Magdaleno Medio as part of the all-women legal firm, Colectivo de Abogados Luis Carlos Pérez.“I will keep working together with communities for the construction of a country that is democratic, just and inclusive, respectful of human rights, demanding conditions for a dignified life for all, and for a Colombia free, sovereign and in peace,” said Maldonado as she accepted the prize.

Jackeline Rojas won the lifetime award for her work, including as leader of the Popular Women’s Organization (OFP) in the oil company town of Barrancabermeja, which organized local women for peace and human rights as well as creating community kitchens.  “I always saw her offering her whole soul, accompanying very difficult moments for her partners, including murders.  They took the radical  option of peace,” said Father Francisco de Roux, the founder of the Magdalena Medio Peace and Development Project. The OFP’s “active resistance to violence converts them, and other local organizations, into a critical conscience that society has to take into account,” according to Pilar Rueda, delegate for the rights of youth, children and women for the Ombudsman’s Office (as quoted by  Constanza Vieira of Inter-Press Service).

One of several finalists were the brave members of the Afro-Colombian community, Finca la Alemania, who were displaced after paramilitary leader Cadena took over their farm. They have returned, and despite the 2010 murder of their leader Rogelio Martinez, they are determined to reach their dream of creating a thriving cattle ranch.  Rogelio’s widow, Julia, was there to represent the community.

It was a joyous day, and LAWG was so glad to be part of it.