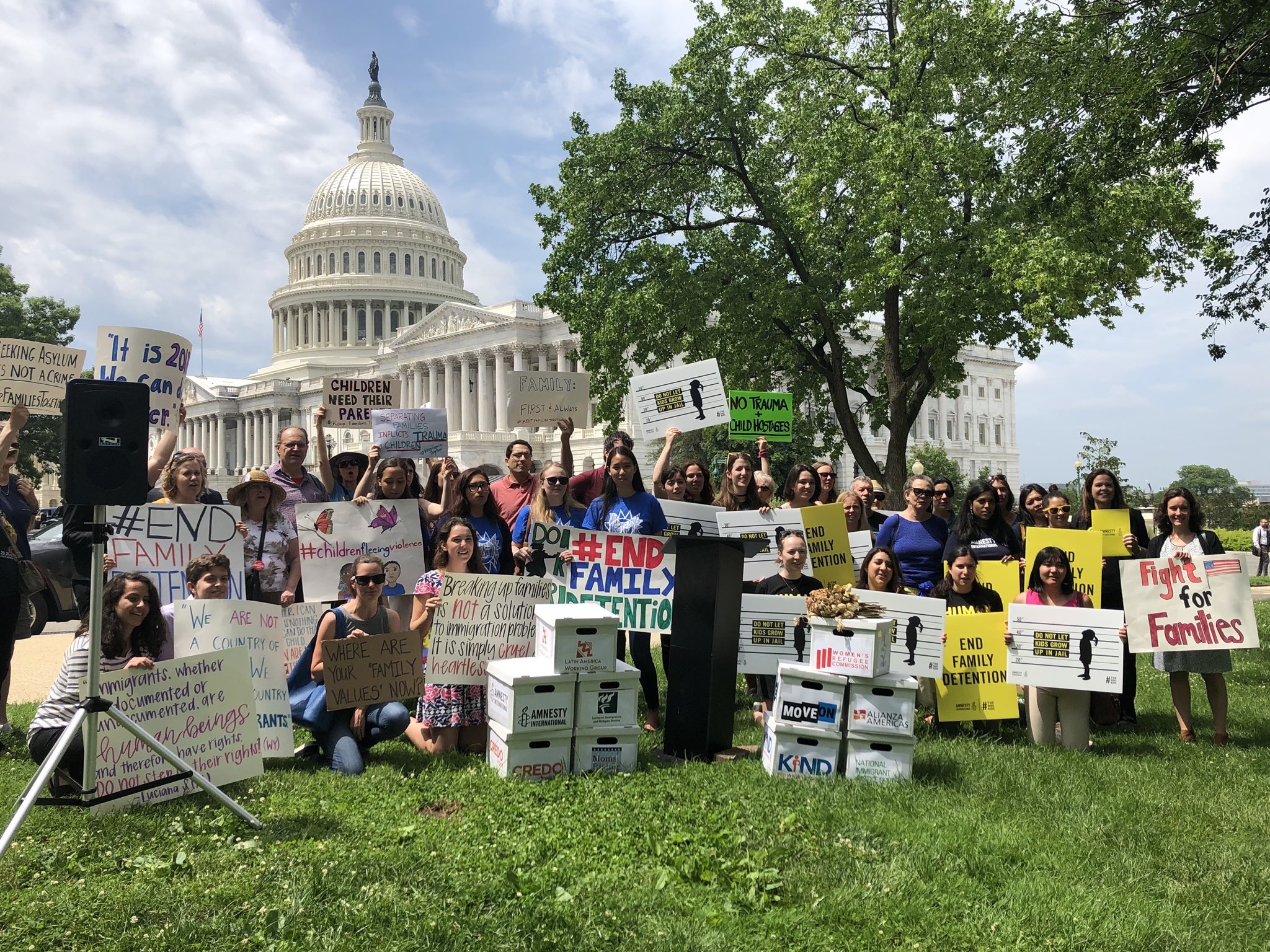 •Leading Advocacy Organizations & Members of Congress Rally to Deliver More than 300,000 Petition Signatures to DHS to Stop Family Separation & Detention
Latin America Working Group, June 14, 2018
“Over 300,000 individuals have spoken up to say no more to this cruelty. We call on the Administration to halt family separation and detention now.”

•Honduran Man Kills Himself After Threat of Family Separation at U.S. Border, Reports Say
Jeffery C. Mays and Matt Stevens, The New York Times, June 10, 2018
“A Honduran man who was told he would be separated from his family after he had crossed the United States border into Texas with them last month strangled himself in his holding cell, according to Customs and Border Protection officials, public records and media reports.”

•‘They just took them?’ Frantic parents separated from their kids fill courts on the border
Michael E. Miller, The Washington Post, June 9, 2018
“For the first time, federal courtrooms here and across the Southwest are being flooded with distraught mothers and fathers who have been charged with misdemeanor illegal entry and separated from their children — a shift in policy touted by the administration as a way to stop families from trying to reach the United States but decried by critics as traumatizing and inhumane.”

•UN says US must stop separating migrant children from parents
The Guardian, June 5, 2018
“The United Nations has urged Washington to immediately halt its controversial practice of separating asylum-seeking Central American children from their parents at the southern border.”

•Blowback over border separations amps up tensions inside Trump administration
Nancy Cook and Ted Hesson, Politico, June 4, 2018
“The shift has brought tensions to a boil between some administration officials and the White House over how far they can push immigration policy, both legally and politically.”

•Despite Trump’s Family Separation Threat, Border Arrests for Illegal Immigration Continue to Rise
Katie Reilly, TIME, June 6, 2018
“While the number of arrests in June may provide a better indication of how the family separation policy is affecting border crossings, May’s numbers indicate that many migrants have not been deterred. The number of family units trying to cross the border increased by 435% in May 2018, compared to May 2017.”

•New ‘zero tolerance’ policy overwhelms South Texas courts
Lomi Kriel, Houston Chronicle, June 9, 2018
“More than half of all migrant families and children apprehended at the southern border wade across the river near McAllen and since mid-May, public defenders here said more than 430 parents have been separated from their children while facing prosecution.”

•Border arrests exceed 50,000 for third month in a row
Nick Miroff, The Washington Post, June 6, 2018
“U.S. border agents made more than 50,000 arrests in May for the third month in a row, the Department of Homeland Security said Wednesday, an indication that escalating enforcement tactics by the Trump administration — including separating migrant parents from their children — has not had an immediate deterrent effect.”

•So many immigrants are being arrested that ICE is going to transfer 1,600 to federal prisons
Eli Rosenberg, The Washington Post, June 7, 2018
“U.S. Immigration and Customs Enforcement is moving 1,600 detainees into federal prisons to address overflows from the surging number of prosecutions resulting from the Trump administration’s new ‘zero-tolerance’ policies, the agency said Thursday.”

•’Prison-like’ migrant youth shelter is understaffed, unequipped for Trump’s ‘zero tolerance’ policy, insider says
Molly Hennessy-Fiske, Los Angeles Times, June 14, 2018
“The children were ‘huddled together, tears streaming down their faces,’ he said. Officials had told them their parents were “lost,” which they interpreted to mean dead.”

•Trump officials consider using tent cities to house unaccompanied minors
Luis Sanchez, The Hill, June 12, 2018
“In the coming weeks, Department of Health and Human Services (HHS) officials will visit Fort Bliss, the Army base near El Paso, Texas, to look at the land where they are considering building a tent city that would hold between 1,000 to 5,000 children, U.S. officials with knowledge of the plan told McClatchy.”

•What Life Is Actually Like for Kids in Migrant Detention Centers
Luke O’Neil, Vice News, June 6, 2018
“On Sunday, US Senator Jeff Merkley of Oregon tried to visit a detention facility for migrant children in Brownsville, Texas. It did not go well.”

•Sen. Jeff Merkley denied entry to immigrant detention center
The Oregonian, June 4, 2018
“‘I think it’s unacceptable that a member of Congress is not being admitted to see what is happening to children whose families are applying for asylum. I decided to come out here, go up to the door and ask to be let in,’ Merkley said in the video.”

•U.S. decision on asylum casts a pall over immigrants fleeing gang violence
Cindy Carcamo, Los Angeles Times, June 14, 2018
“Rubilia Sanchez knew she had to flee her hometown of Tecun Uman after gangs repeatedly threatened to rape and murder her.So she took her four daughters and made the familiar, dangerous trek out of Guatemala, through Mexico and into the United States, where she requested asylum.”

•On the Border, a Discouraging New Message for Asylum Seekers: Wait
Simon Romero and Miriam Jordan, The New York Times, June 12, 2018
“At an array of points along the United States-Mexico border, at lonely sentry boxes, remote bridges and crowded border crossings, the scenes over the past few weeks have been similar: desperate asylum seekers from Central America, many of them children, camped out on Mexican soil as they wait to be admitted to the United States.”

•Trump Administration Restricts Asylum Access For Victims Of Gang And Domestic Violence
Elise Foley, Huffington Post, June 11, 2018
“Untold numbers of victims of violence, including women abused by their partners, could be denied asylum and deported back to danger at home because of a new ruling Attorney General Jeff Sessions issued Monday.”

•Trump keeps making it harder for people to seek asylum legally
Dara Lind, Vox News, June 5, 2018
“The Trump administration’s tactics at the border — both the ones it’s announced and bragged about officially and the ones that lawyers, advocates, and journalists have witnessed — add up to a picture that makes it hard to say, for sure, that someone with a legitimate need for humanitarian protection will be able to enter the US safely.”

•Caught in limbo, Central American asylum-seekers are left waiting on a bridge over the Rio Grande
Molly Hennessy-Fiske, Los Angeles Times, June 5, 2018
“Dozens of families from Guatemala, Honduras, El Salvador and Peru, some with babies only a few months old, have spent weeks living on the Mexican side of the bridge, waiting to be admitted to the United States as asylum seekers.”

•The Death of a Farmworker
James Goodman, The Progressive, June 7, 2018
“She sought help for domestic violence but, without social support, an immigrant’s search for a better life took a deadly turn.”

•US government to use facial recognition technology at Mexico border crossing
Sam Levin, The Guardian, June 5, 2018
“The project, which US Customs and Border Protection (CBP) confirmed to the Guardian on Tuesday, sparked immediate criticisms from civil liberties advocates who said there were a host of privacy and constitutional concerns with an overly broad surveillance system relying on questionable technology.”

•Mexico has its own southern border crackdown — but it isn’t working
David Noriega and Ani Ucar, Vice News, June 7, 2018
“Now, four years later, it’s clear that the Southern Border Program has created more problems than it’s solved. Rather than stopping migrants, Mexico’s immigration crackdown has just pushed them to new and more dangerous routes, where they’re vulnerable to predatory criminals who rob them — or much worse.”

•’Police never turned up’: El Salvador’s devastating epidemic of femicide
Jo Griffin, The Guardian, June 6, 2018
“As the rate of femicide has increased, so have demands for the government to act.”

•Social work in El Salvador: ‘We either do something – or let the children be killed’
“Rory Truell, The Guardian, June 5, 2018
In a country with the world’s largest gang problem and the highest murder rate, El Salvador is not an easy place to practise social work. Tens of thousands of children have been abandoned, abused, trafficked, organ harvested, and denied access to health or education services.”

•Mexico candidate shot while posing for selfie in latest murder of politician
David Agren, The Guardian, June 12, 2018
“The cold-blooded murder on Friday – captured by a CCTV camera – has cast a harsh light on the stunning levels of violence in Mexico and the risk taken by those who run for elected office in the country.”

•Teenager from Iowa killed after ICE returns him to Mexico
Marlena Baldacci and Ralph Ellis, CNN, June 8, 2018
“Manuel Antonio Cano Pacheco came to America as a little boy and had a full life in Des Moines, Iowa, his mother said. He had acquired DACA status, attended high school and had family”

•Amid worsening violence, Nicaraguans say crisis has reached ‘catastrophic’ proportions
Kyra Gurney, The Miami Herald, June 5, 2018
“Nearly seven weeks after a violent crackdown on student protesters ignited a movement to oust the president of Nicaragua, daily life has become difficult and dangerous for a population increasingly in open rebellion against the government.”

•Open Letter to the Present Ministers and the Organization of American States in the Context of the XLVIII OAS General Assembly
Amnesty International, June 1, 2018
“Faced with these facts, the organization calls on the states of the region to include in the final declaration of the General Assembly firm commitments that guarantee the protection of human rights for all people without distinction. These commitments must naturally be translated into actions and policies to be implemented in the Americas immediately.”

•Preliminary observations on the IACHR working visit to Nicaragua
IACHR, May 21, 2018
“The Commission urges the State of Nicaragua to cease repressing social protest immediately. In this regard, the State should urgently adopt the measures needed to guarantee the free and full exercise of the rights to freedom of expression, peaceful assembly and political participation. The Commission emphatically urges the State to diligently investigate these facts, prosecute and punish those responsible and make reparations to the victims of human rights violations.”