A compilation of recent top articles and reports related to issues of U.S. immigration and enforcement policy and migration from Central America and Mexico (articles in English and Spanish). Please feel free to send us recommendations or requests for upcoming news briefs: lfolkerts@lawg.org. Read online here. 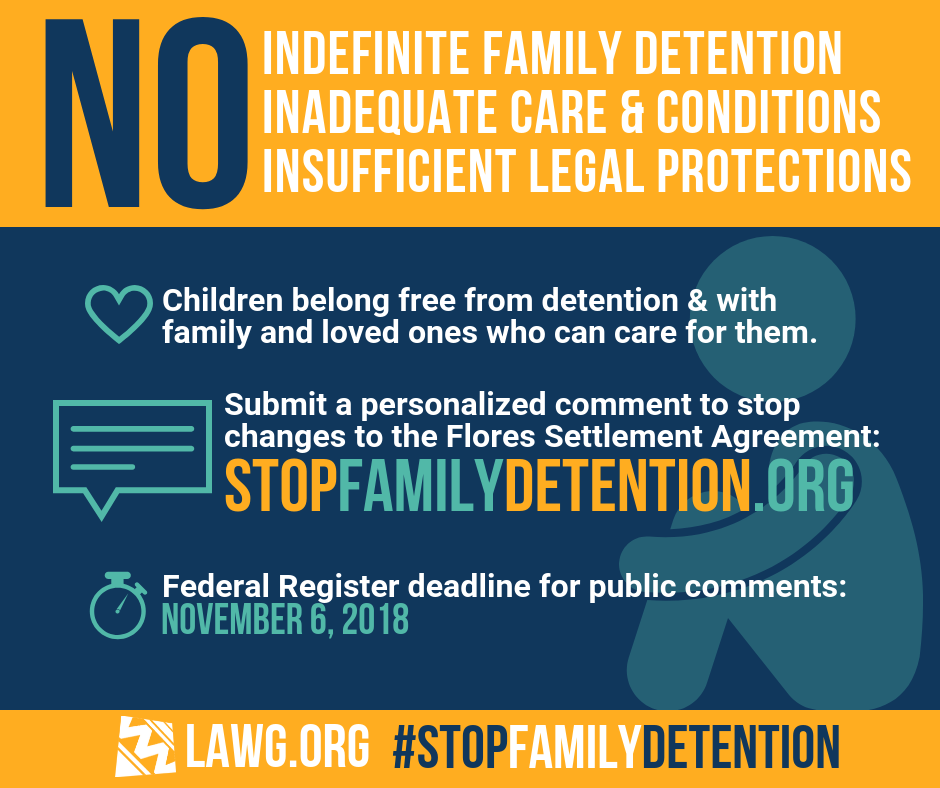 U.S. Enforcement
The Trump Administration Carried Out Thousands More Family Separations than Previously Acknowledged
Ryan Devereaux, Alice Speri, and Cora Currier, The Intercept, October 11, 2018
“… in 2017 and 2018, the Trump administration appears to have separated approximately 8,000 ‘family units’ along the border. Even if half of the people referred to in that figure were parents, the remaining 4,000 children would dwarf the total number of kids commonly reported to have been impacted by the ‘zero tolerance’ campaign — that total tends to hover between 2,500 to 3,000.”

A Mexican Man’s Fatal Journey to Reclaim His American Life
Simon Romero, New York Times, October 14, 2018
“The story of the Lunas, a family whose roots run deeper in Idaho than they do in Mexico, is becoming a familiar one. Deportations of foreign-born long-term residents are surging under the Trump administration, but as they reach into well-established immigrant communities far from the border, there is often little chance they will be permanent.”

Immigrant Teens Are Stuck In An Expanding Tent City In Texas
Amber Jamieson, Buzzfeed News, October 14, 2018
“It now holds immigrant children who crossed the border without an adult, in theory as a last stage of their stay in the vast US shelter bureaucracy. And as the shelter expands, administrative issues have cropped up concerning legal representation and FBI background checks — extending many teens’ stays longer than what HHS says is the average.”

3,121 desperate journeys: Exposing a week of chaos under Trump’s zero tolerance
Olivia Solon, Julia Carrie Wong, Pamela Duncan, Margaret Katcher, Patrick Timmons, and Sam Morris, The Guardian, October 14, 2018
“They came to the US seeking a better life. They ended up behind bars. Thousands of documents analyzed by the Guardian provide the most comprehensive picture yet of what happened to immigrants prosecuted under the Trump administration’s zero tolerance policy.”

Trump administration weighs new family-separation effort at border
Nick Miroff, Josh Dawsey, and Maria Sacchetti, Washington Post, October 12, 2018
“One option under consideration is for the government to detain asylum-seeking families together for up to 20 days, then give parents a choice — stay in family detention with their child for months or years as their immigration case proceeds, or allow children to be taken to a government shelter so other relatives or guardians can seek custody.”

ICE Is Sending Separated Children Home With No One To Pick Them Up
Angelina Chapin, Huffington Post, October 12, 2018
“Legal and immigration experts say ICE is sending children back to Central America without properly notifying parents of their travel plans. The Department of Justice recently said ICE is only handling only ‘a relatively small number’ of repatriation cases, but advocates say even a handful of situations in which parents aren’t given the proper notice to pick up their children is a major cause for concern.”

DHS rule change would harm immigrant, citizen health outcomes
Kathryn Pitkin Derose, The Hill, October 11, 2018
“Research is also clear that immigrants’ lack of health insurance leads to reduced access to care and poorer quality care for them and their citizen-children. This could put all of them at risk for deteriorating health over time.”

The Five-Year-Old Who Was Detained at the Border and Persuaded to Sign Away Her Rights
Sarah Stillman, The New Yorker, October 11, 2018
“On Helen’s form, which was filled out with assistance from officials, there is a checked box next to a line that says, ‘I withdraw my previous request for a Flores bond hearing.’ Beneath that line, the five-year-old signed her name in wobbly letters.”

At Immigration Argument, Justice Kavanaugh Takes Hard Line
Adam Liptak, New York Times, October 10, 2018
“The question in the case was whether the federal authorities must detain immigrants who had committed crimes, often minor ones, no matter how long ago they were released from criminal custody. Justice Kavanaugh said a 1996 federal law required detention even years later, without an opportunity for a bail hearing.”

This Supreme Court immigration case could mean more family separations
Liz Martinez, The Hill, October 10, 2018
“At stake in the Preap case is an extension of an already cruel policy — the idea that immigrants who’ve peacefully and productively lived in their communities for years following their release from criminal custody should be subject to unquestionable mandatory detention.”

Proposal to limit visas for immigrants on government assistance opens up for public comment
Maegan Vazquez, CNN, October 10, 2018
“The proposed rule was published in the Federal Register on Wednesday, initiating a 60-day period for the public to submit comments. The Department of Homeland Security is required by law to review the comments and address substantive ones before issuing a final rule.”

The US Is Set To Deport Witnesses Who Dispute The Border Patrol’s Version Of A Fatal Shooting
Adolfo Flores, Buzzfeed News, October 10, 2018
“Apart from the unnamed Border Patrol agent who fired the shot that killed Gómez González, the three men are the only known material witnesses in the shooting, and it is unclear how their absence from the United States would affect the investigation, especially if their statements turn out to be the only ones contradicting the Border Patrol’s claim that the agent had fired his weapon in self-defense.”

How Trump’s Immigration Policies are Provoking Insecurity at the U.S.-Mexico Border
Massoud Hayoun, Pacific Standard, October 10, 2018
“Donald Trump’s immigration policies are spurring further instability at the United States-Mexico border, analysts say, as an apparent surge in migrants headed to and from the U.S. weighs heavily on already overwrought public infrastructure in places like Tijuana.”

Mexican Enforcement
U.S. and Mexican Officials Collaborating to Stop Asylum-Seekers, Attorneys Allege
Gus Bova, The Texas Observer, October 12, 2018
“Since June, the lawyers allege, Mexican customs officials along the Texas-Mexico border have been doing something virtually unprecedented: stopping asylum-seekers from entering the bridge, and if the migrants lack proper Mexican travel documents, the Mexican agents detain and even deport them.”

Root Causes
Honduran migrant group treks north as U.S. calls for tighter borders
Gustavo Palencia, Reuters, October 13, 2018
“‘I believe we’ll get to the United States. There’s no work in Honduras, and you live in fear that they’re going to kill you or your children,’ said Fanny Barahona, 35, an unemployed teacher who walked with her nine-year-old son and carried a two-year-old daughter.”

Archbishop Óscar Romero and Pope Paul VI Are Made Saints
Elisabetta Povoledo, New York Times, October 14, 2018
“Father Sandoval, a member of Concertación Romero, an organization that is pushing for the truth of Archbishop Romero’s death to be made public, said papal recognition should lead to wider justice being served. ‘Those responsible for his death still have to be brought to trial,’ he said.”

Salvadorans await justice in civil war killings as one of its first victims sainted
Anna-Catherine Brigida, The Guardian, October 14, 2018
“Romero’s assassination is no different: nobody has ever been convicted of plotting or carrying out the murder – or the massacre that took place when troops fired into the crowd at his funeral, killing dozens of mourners.”

Mexico’s Morgues Are Overflowing As Its Murder Rate Rises
Carrie Kahn, NPR, October 10, 2018
“Authorities say there are two trailers packed with human remains, and dozens more bodies stacked up in the city’s morgue. They say there are 444 in all. Some of the bodies have been in storage for more than three years.”

Imperfect Justice in Guatemala
Jo-Marie Burt, NACLA, October 12, 2018
“A national court has found that the Guatemalan army committed genocide. But it has also found Rodríguez Sánchez, Ríos Montt’s chief of military intelligence, not guilty. Survivors are determined to continue their struggle for justice.”

Environmental Activist Bernardo Caal Xol Awaits Verdict
Telesur, October 13, 2018
“Bernardo Caal Xol, a Mayan Q’eqchi’ community leader and environmental activist from Guatemala, is waiting for a verdict in a controversial trial, where he is accused of fraud, illegal detention and theft, after being in pre-trial detention for 10 months. Caal Xol and his supporters claim his only ‘crime’ has been defending the Cahabon and Oxec rivers from hydroelectric projects.”

USA: Catastrophic Immigration Policies Resulted in More Family Separations than Previously Disclosed
Amnesty International, October 11, 2018
“The US government has deliberately adopted immigration policies and practices that caused catastrophic harm to thousands of people seeking safety in the United States, including the separation of over 6,000 family units in a four-month period, more than previously disclosed by authorities, Amnesty International said in a new report released today.”

The U.S. Asylum System in Crisis: First Steps for Rescue
Migration Policy Institute, September 27, 2018
“Faced with a system in crisis, the Trump administration has taken a number of actions to narrow access to asylum in the United States. These include largely eliminating gang and domestic violence as grounds for asylum and introducing a ‘zero-tolerance’ approach to border enforcement that entails prosecuting all first-time border crossers, including adult asylum seekers, for illegal entry—a policy that for a time led to the separation of apprehended parents from their children.”

Fake Jobs for Sale: Analyzing Fraud and Advancing Transparency in U.S. Labor Recruitment
Centro de los Derechos del Migrante, Inc., October 2018
“Given the lack of available information, those seeking work in the United States oftentimes have no other option than to trust in recruiters to learn about work opportunities and access to H-2 visas. As such, recruiters monopolize information and control access to jobs, imposing fees and other illegal terms as conditions for accessing job descriptions, visas, and employment. The lack of transparency in H-2 visa programs generates obscure recruitment conditions which compromise both the migrant workers’ labor and human rights.”