Clara Rojas: An Optimist for Peace, Despite the Challenges Faced in Colombia

Now a recently-elected member of Colombia’s Congress for the Liberal Party, Clara Rojas was kidnapped in 2002 by the FARC and held captive for six years alongside that year’s Green Party Presidential candidate Ingrid Betancourt.  She had served as Betancourt’s campaign manager and vice presidential running mate.  As part of LAWG’s commitment to ensuring the voices of diverse victims of the conflict are heard, we were honored to organize meetings for her in Washington.  On March 24th, 2015 during an event hosted by Latin America Working Group and Washington Office on Latin America, Clara Rojas discussed her thoughts on the ongoing peace process in Colombia. 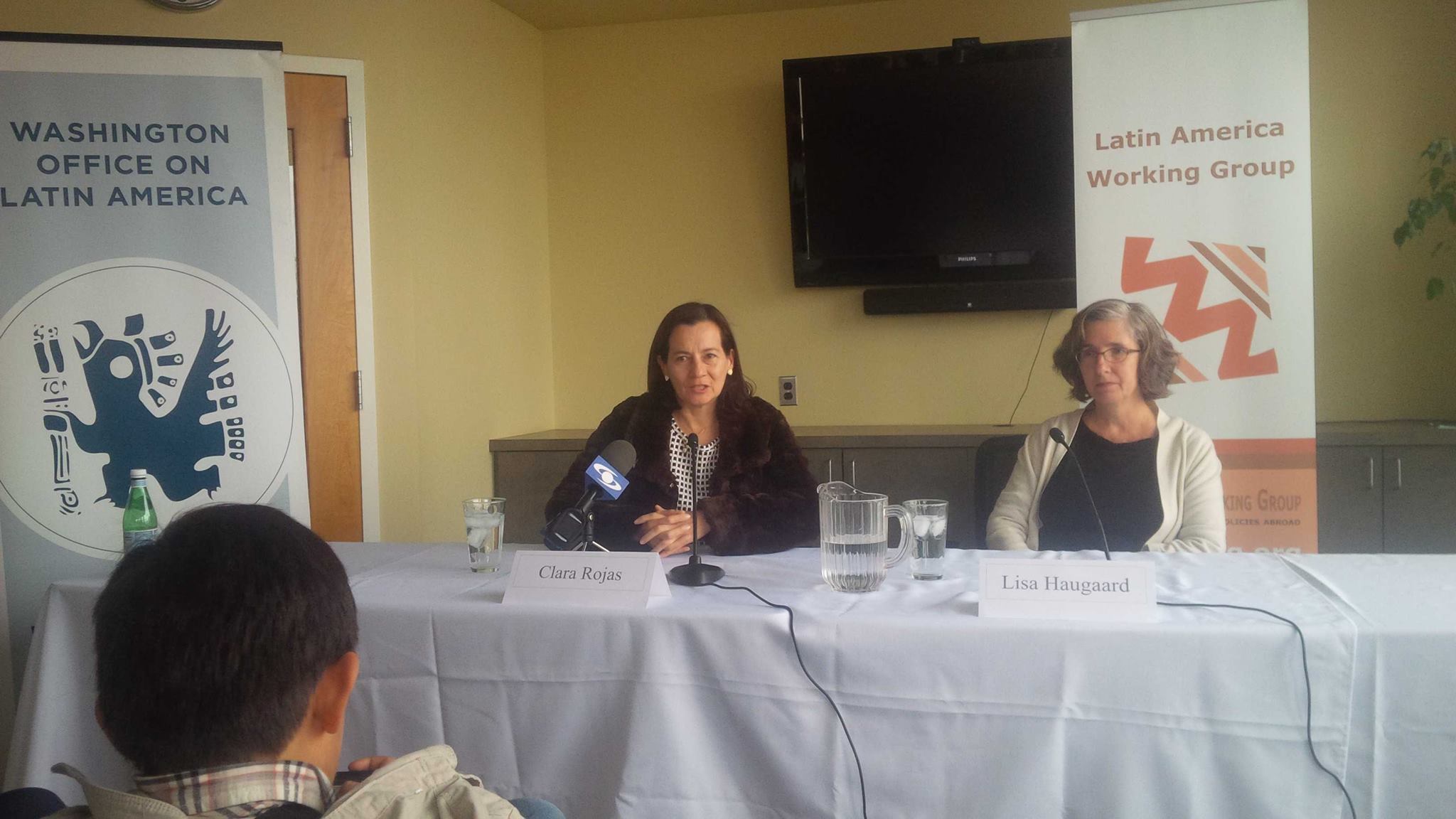 Colombia is the only country in Latin America that faces a more than 50-year-old unresolved conflict. Now is the first real opportunity in many years to achieve peace. There have been previous attempts that have not been successful, but this time the conditions to eventually reach an accord appear to be present. Despite having been a victim of the conflict, I think this might be the solution.

The Colombian government has been able to advance in consolidating a peace process, and has set a thematic agenda of five topics, of which three have come close to agreement: the eventual political participation of the FARC, drug-trafficking, and the fundamental issue of the distribution and ownership of land in Colombia, including the possibility that unused land be awarded to farmers or other people in the rural sector. There are still two important topics [to be decided]: the rights of victims and the conditions for insurgents turning in their weapons. This is the first time in the history of our peace processes that victims are able to participate directly at the negotiating table. When I was director of the Pais Libre Foundation, I was one of the first voices to speak in favor of victims being able to participate, as well as women. In this we count on the support of the international community, particularly of countries like Norway that have always been very receptive to the cause of peace.

As a member of my country’s Congress, I form part of a constitutional commission that deals not only with constitutional amendments in Colombia, but also with the reform of penal codes, and with the implementation of strategies for peace. Our participation in Congress is going to be very important, as will be other members of Congress that participate with me in the human rights commission, and the commission for gender equality and women. There is great interest in Colombia in seeing that this peace process succeed.

Sixty victims have participated who were suggested by the United Nations and by the National University [as the rights of victims are being discussed at the negotiating table]. The criteria that they used to select the victims that would travel to Havana was to include the entire universe of victims, not just those affected by the FARC. I would have preferred that it focused on the victims of the FARC, but I also understand the struggle to solve this conflict, which is an enormous task. That is why victims of paramilitarism and the state also participated. That process did not hold up to all expectations, perhaps because we would have preferred to have a different attitude, at least publicly, in terms of the FARC, but this step [of the victims presenting their views] was accomplished, and this must be highlighted. We’ll have to see at the end of this chapter what will end up being written, and what will be the real commitments to the victims, which have as their objective to achieve the search for truth, the reestablishment of their dignity, and of course, the guarantee for a non-repetition of the events that led to the conflict. What would be the best guarantee? That they are able to sign the agreements and that in the end, there are no more victims in Colombia due to the conflict. That is our dream. That is the ideal. For this we need a real step forward.

The other thorny subjects are the conditions for the definitive turning in of weapons, and how once the accords are signed, they will be subject to a national referendum for all Colombians. With these two important issues, we see that in this next half year we will reach the most important part of this process, because it will define important subjects like transitional justice, and how each party to the conflict will say “I can accept this/I can’t accept beyond this” or “I will/will not accept responsibility.” I think the moment of truth has arrived.
Pablo Catatumbo (the FARC leader) recently said “there is still a lot of fabric to be cut.” I agree. I think we can be optimistic and moderate as the President said, and understand that the thorniest subjects remain to be solved and agreed upon. What’s important is that there is good will on the part of the government and the majority of sectors in Colombia that this is the moment for peace. I view very positively the fact that the President has brought together an advisory committee for peace with different sectors than those close to him. These include opposition sectors and intellectuals from different ideologies and tendencies, so that they can advise the President first hand on which eventual obstacles they might see or criticisms they might have of the process. This way we will be able to achieve a consolidation [for peace].

I also want to highlight two events that have happened recently. One is the creation of a commission for clearing land mines. I had the opportunity to meet with the retired general who will be in charge of forming this commission. Of the 668 municipalities calculated to have anti-personnel mines in the rural parts of Colombia, the first 102 would be prioritized. This has already begun. I think the most important thing to do now is to follow through on this in a regular way so that delegates of the FARC and members of the Colombian armed forces effectively sit together to talk this through, since they are the ones with the capacity to remove these mines. The other important event deals with the nation’s inspector general’s recent statement about the many disappeared people in Colombia, almost 3000 of whom are believe to be disappeared by the FARC. The FARC once said that they did not have anyone disappeared. But this week they recognized it. Or at least indicated their intention to help create a commission to locate the disappeared. That figure is only a preliminary estimate…. There is still a lot of work to be done and long path to resolve and clarify the number of victims that might be out there.

With these recent events from the past weeks, I still declare myself to be an optimist with this process, despite the immense difficulties that might persist, and I ratify my full confidence in chief negotiator, Dr. Humberto de la Calle. I think he has been a very responsible and prudent person, as it is not easy to deal with a negotiating group such as the one on the other side, and I understand that they’re trying to construct a minimum common language, which is not easy with the FARC.

To this, we want to add the support shown by the United States government by naming a special envoy to participate as a representative of the United States to the negotiating table in Havana. We see this as very positive within Colombia. We also see as very positive the support that the international community has given the process. Not only do they deem the process as possible, as viable, but they have also expressed their desire to participate in it so that once the accords are signed, we can have a post-conflict scenario that can really be implemented. This does not end with the signing of the accords. The challenge comes after they’re signed, and for that we need a lot of strength to solve immense problems, such as reincorporating these people into civilian life, and creating the conditions for them to have work. The challenge of a post-conflict Colombia, is not to repeat what happened in Guatemala, Nicaragua, or El Salvador, where once peace processes were signed, the levels of violence increased because people were not skilled enough, there weren’t many employment opportunities, and problems of extortion, street crime, and other problems that affected the citizenry created other types of violence. We have a long-term task to address. In the end, I think the ends justify the means: achieving peace. I personally think that not having any more victims due to the conflict in Colombia is the best legacy that we can leave for future generations. They might have other problems, but at least this level of violence will not be one of them.

The other great challenge is being able to strike a balance in favor of the dignity of the victims, and respect for their human rights.

A few days ago, the defense minister signaled that the FARC had broken their cease-fire truce because of an alleged attack in the south of the country. Last week, there were complaints on the part of the FARC that the army had not kept their word. I hope that these are instances that we are able to overcome, and as long as this gets denounced and made public, we will be able to prevent these events to be repeated in the future.

I continue to declare myself an optimist, despite the tensions that we are living through in the country.

Watch the full video of the event with Clara Rojas here: