Colombia’s peace process made a dramatic step forward on September 23rd with the agreement on transitional justice and the announcement that the process would wrap up by March 2016.

With this agreement, the thorniest issues have been resolved by the two parties in Havana. Agreements on demobilization and verification of peace accords are still to be finalized.

This accord provides stronger justice than most peace accords. As it is the first peace accord negotiated within the International Criminal Court’s framework, generalized amnesty is not permitted—but the justice is still limited. Reactions to the accord are diverse. Ex-President Uribe, as expected, denounced it. Some of Colombia’s millions of victims of violence lamented that FARC leaders who agreed to tell the truth would receive an alternative to jail, while others worried that the members of the army already convicted of or implicated in extrajudicial executions could receive reduced sentences.

But the majority of the victims’ representatives who had traveled to Havana to present their views to the table welcomed the accord. “This is a decisive step towards the recognition and full respect of human rights and inter- national humanitarian law in Colombia, as it signifies a model with a restorative justice perspective that will allow sanctions that will effectively support reparation, guarantees of non-repetition, and construction of peace…. The accord on justice, like the creation of a Commission to Clarify the Truth, Ensure Reconciliation and Non Repetition, opens the historic opportunity for full recognition by the armed actors of their responsibilities [during the conflict].” 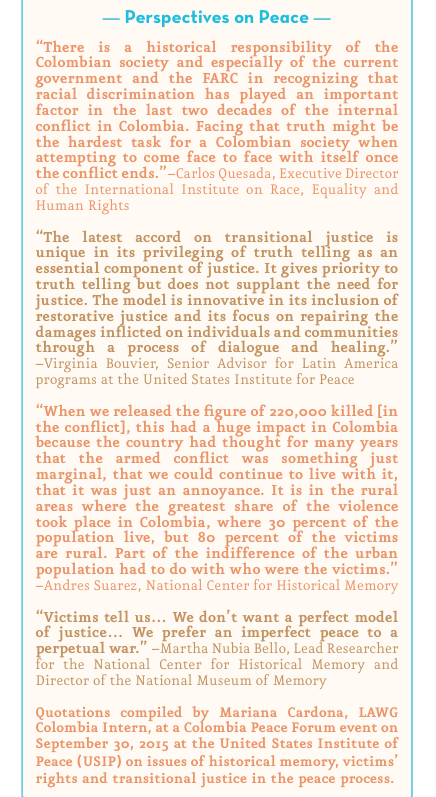 Here at the Latin America Working Group, we’ve been encouraging U.S. support for the peace process while elevating the voices of diverse victims of the conflict—victims of the paramilitaries, of the FARC guerrillas, and of the armed forces. Thanks to your help, 65 members of Congress signed a letter to Secretary of State Kerry support- ing the peace negotiations at a tense moment and calling for the process to be as inclusive as possible. We assisted Colombian-American members of the Colombia Human Rights Committee and the Movement for Peace in Colombia in arranging visits with their members of Congress, and we are opening doors for Colombian human rights activists to be heard in the State Department, White House and Congress. Now, we’ve launched a petition to make room for Afro-Colombian and indigenous peoples at the peace table. Sign the petition at lawg.org/ColombiaPetition2015.

As we look with hope to the future, we also celebrate that the Colombian government suspended the use of aerial spraying of coca crops with glyphosate in October. The government reached this decision after the International Agency for Research on Cancer of the World Health Organization determined in March 2015 that glyphosate was a probable human carcinogen. Many of you have long helped us raise concerns against our government’s massive support for this ineffective and harmful practice, which was so damaging to the health and wellbeing of poor rural communities in Colombia. We organized a petition that was hand-delivered to the Colombian government supporting its initial decision to suspend fumigation and calling for aerial spraying to be permanently ended. Sustainable development in rural communities is a far more humane and effective approach.

This article originally appeared in The Advocate, LAWG’s biannual newsletter. Download the Fall 2015 issue of The Advocate here.