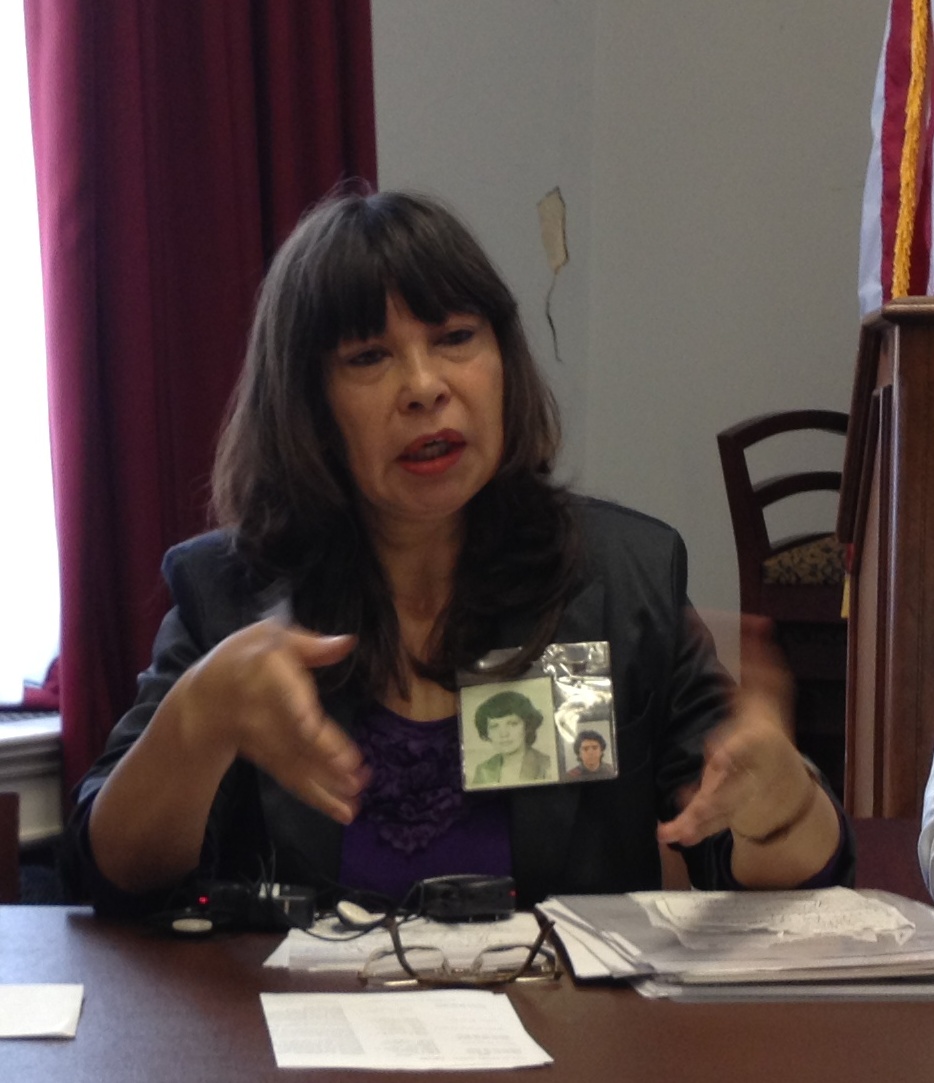 Yanette Bautista tells about her search for answers about the disappearance of her loved ones.
“Very few people have been found, so the question’s always there: how do we talk about them?  Is or was?  Presence or absence?”

It’s hard to understand what exactly it means to be disappeared.  One day a daughter, father, or aunt is there, and the next they aren’t.  Families are left to search endlessly for their loved ones, meeting immense resistance from the government, and all the while never knowing if their loved one is across town or across the country, dead or alive.

During Colombia’s decades-long conflict, tens of thousands of people have disappeared, leaving their families and friends searching for answers. New information indicates that the tragic amount of people missing in Colombia may be even greater than that of the infamous disappearances in Argentina or Chile. But many people don’t even know it’s happening.

In March, LAWG welcomed a five person delegation to Washington to share their first-hand understanding of forced disappearance in Colombia.  The group of family members of victims, social activists, leaders of human rights groups, and forensic scientists offered a comprehensive description of forced disappearances—articulating the complexity of this terrible crime through the eyes of victims while providing expert testimonies and analysis of the current situation in Colombia.

Martha Burbano Arrechea, director of Corporación de Desarrollo Regional, a human rights group from Valle del Cauca, explains, “It is not just a terrible crime for the one who has been disappeared; the uncertainty is torture that the families live with every day.”

To Yanette Bautista, director of Fundación Nydia Erika Bautista, an organization which promotes the rights of families of disappeared, the word disappearance “means absence, it means orphans, it means mothers waiting for an answer, it means solitude and eternal pain, it means knowing that we may never find our loved ones.”  Yanette has been searching for answers since 1987, when her sister Nydia Erika and her partner Cristobal Triana were both forcibly disappeared in the same month.

Why is this happening?  “I live in a beautiful country that smells of flowers and fresh fruit, in a country called the oldest democracy in Latin America, where unfortunately we’ve been living with an armed conflict for more than 40 years,” Yanette explains.  “Disappearances happen when people think differently, when they represent political opposition, or when they belong to a certain party or a social movement—and also when people fight for their rights, for example for the right to land, justice, or truth.”

“Armed men are behind these disappearances, whether they are soldiers, policemen, or paramilitaries,” Yanette tells us.  José Daniel Álvarez Ruiz, director of Familiares Colombia, an association of families of the disappeared, adds that “paramilitaries often operate with the complicity of the military or police.  So the police don’t help us look for our loved ones, and in some cases they even try to obstruct our search.”  José Daniel has lived though this struggle.  His father and uncle were disappeared by paramilitaries in January of 1990, along with 41 other famers.

“Many of the people implicated in these crimes are actors of the state, and they’re the same ones that are supposed to be helping us resolve these crimes—it’s a little contradictory, no?” asks Martha.  Echoing this, José Daniel reflects, “Today, the struggle of the families for truth and justice is considered a defamation of the state and unpatriotic.  Because of this, we are seen as enemies of development and of the government—and most unfortunately, when soldiers are implicated in a case of forced disappearance, the government almost always defends them in the name of honor or troop morale.”

“Before, we had a simple life,” José Daniel remembers.  “After the disappearances of our loved ones, we’ve had to learn.  We’ve had to study.  We’ve had to look behind doors that we didn’t even know existed.  The day a disappearance occurs, a tireless struggle begins for us; life is filled with emotions we’ve never even realized we had.  Nothing we do, no little achievement is sufficient while our loved ones are disappeared.  While they’re gone, we’ll always have anguish.”

“We’ve been fighting for more than 20 years to find our loved ones and to learn the truth.  We have formed organizations of families to help other victims who live through this crime.  We work on capacity building, we support them judicially, we help women leave the kitchen and go out to the street to protest for their loved ones.  We have written laws and presented them to Congress.  There are women who have searched with their own hands in tombs to look for their loved ones.  We do everything possible to find them, to know the truth, and to achieve justice,” Yanette says.

Despite the challenges, José Daniel is certain that “North Americans can help us break the silence.  They can tell their representatives and tell the Colombian government they want to see an end to forced disappearances—that they just won’t permit it any more.  Tell the government to investigate disappearances, tell it to do its job.  Say that we need their help in this search and that they need to tell us the truth of what happened.”

“Stand in solidarity with us on important dates like the International Day of the Disappeared on August 30,” Yanette adds. “Please protest against this crime that leaves nothing but broken homes and orphaned children.”

Yanette speaks softly, as if almost to herself, when she tells us, “If history is written by the winners, it means there is another story—the true story.  Our story.”