Colombia: If We Lose Our Memories, There is No Peace Process

Every year, faith-based organizations, activists, and human rights defenders from across the nation and world convene in Washington, D.C. to participate in Ecumenical Advocacy Days. One of the speakers which we had the pleasure of hosting this year was Andres Alba, the director of the Human Rights Office at the Evangelical Lutheran Church of Colombia. Andres, a theologian by training, spoke at the “Peace Walks and Peace Talks: Building Peace in Colombia from the Ground Up” workshop sponsored by the Evangelical Lutheran Church of America, Mennonite Central Committee, and the Latin America Working Group. Here is his message. 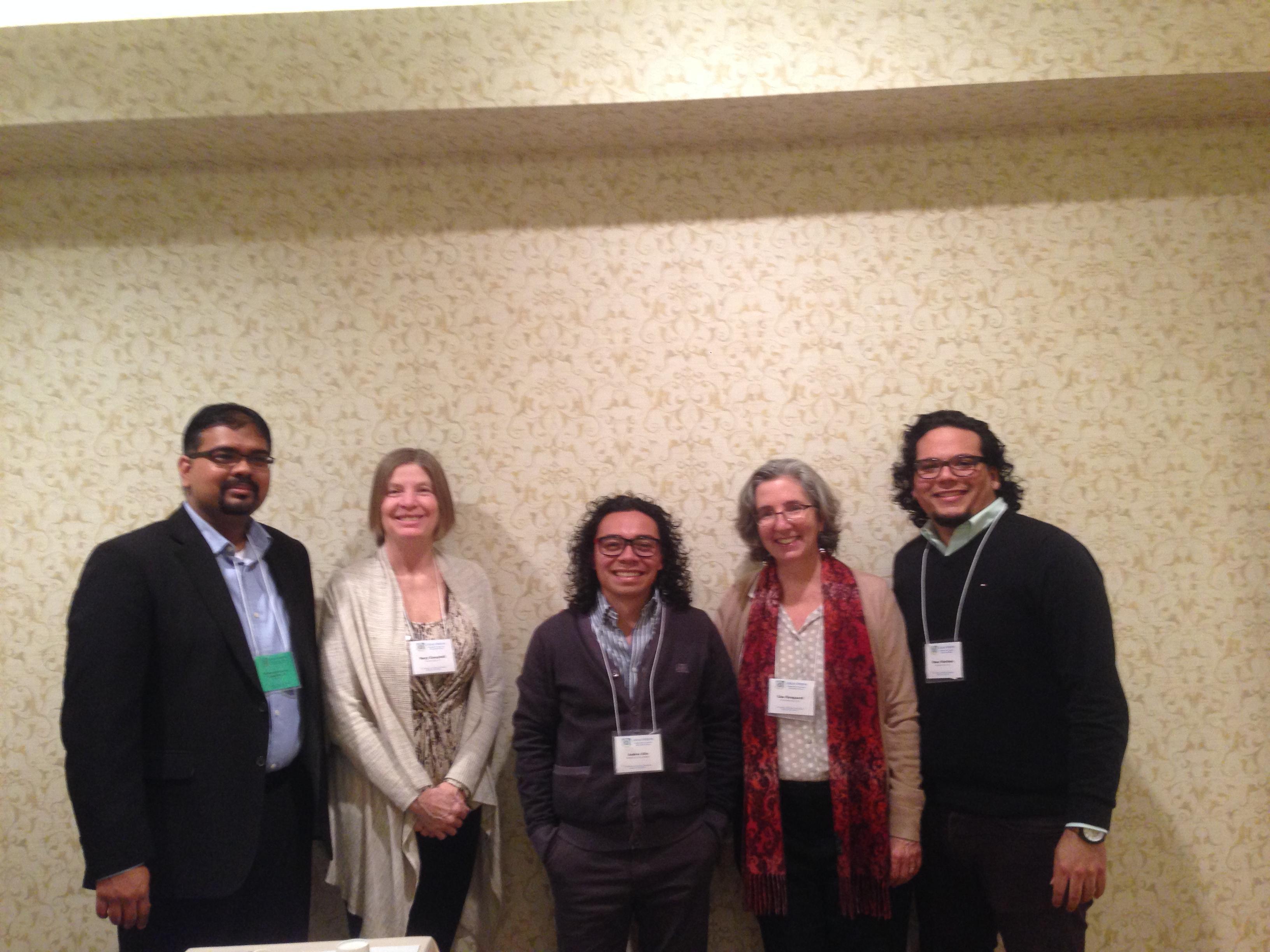 Andres poses for a picture with Theo Sitther of Mennonite Central Committee, Mary Campbell of the Evangelical Lutheran Church of America, and Lisa Haugaard and Omar Martinez of the Latin America Working Group. It is a big responsibility to talk about Colombia today. But we are going to try. What we want to do is have a dialogue, which is exactly what we have been missing in Colombia. They say that Colombians are always either laughing or thinking. We need that to survive. The Jesuit Refugee Service (JRS) in my country has done a study about how people have been surviving in the middle of war. The questions that JRS asked focused on what were the sources of life for victims of the Colombian conflict. What they said—what we said, as victims—is that there are two sources of life, which are the family and the church. The widows, the orphans, the victims of antipersonnel mines, the mothers of the disappeared, they have managed to survive because of the family and the church. We survive together as family and through church, but we do not take away the responsibility of the state.

Women’s bodies have been subject to war in my country, but it is also a country in which women have maintained acts of mobility and resistance. To talk about the peace process in Colombia, we can’t have amnesia. We can’t forget our memories. This is a debate that we are having in Colombia— whether we want a process, a dialogue or a simple agreement. What are we trying to do? The peace process did not start in Havana. It has been going on for much longer. When we look at the history of Colombia, we can see that there are two issues that continue to come up. We know them already: one is the issue of land. For this we kill, and for this we are killed. The other issue is political participation. We have just witnessed the removal of Bogotá Mayor Gustavo Petro, who had previous affiliations with the M19, a demobilized guerrilla group. From a Latin American and Caribbean perspective, there has been a war and a peace process in Colombia since 1492.

If we lose our memory, there is no peace process. If we have a peace process where there is no guaranteed right to truth, there is no peace process. The Colombian conflict is a little different than those in the rest of Latin America, because Colombia practices every tool of war. There is a Colombian poet who said, “We are a country that flees from ourselves.” But a sociologist said, “No, it is not that we flee from ourselves, but that we have been forced out.” The displacement in Colombia has been planned. The victims speak of alliances between the military, the paramilitaries, the guerrillas, and drugtraffickers to take these territories from the civil populations.

It is hard to speak about statistics, because victims are not numbers. The peace dialogue began on September 4th, 2012. But in 2013, there was a huge amount of displacement in Colombia. So while we are talking with each other, we are also killing each other. Things are still so bad that three of every ten deaths in Colombia can be attributed to the war. The persecution of human rights leaders continues, mostly to those who are trying to reclaim their land. There have been two agrarian strikes within these two years, and the government has recognized the collapse of the health system. This is being at war.

The process is also not a post-conflict scenario, because post-conflict does not exist. It is not the implementation of a Victim’s Law and land restitution without guarantees. The government has taken a very important step in approving the Victims’ Law. It has created institutions to help victims. But there are victims who return to their land and are threatened, persecuted, assassinated. We have to guarantee the return of victims. The peace process is about assuring the permanence of victims on their land and territories. There is a need for pardon and reconciliation, in which the churches have an important role. There are acts of resistance and dignity, victims’ expression of their memories, for which we must help pave way.  We insist in civil society that we must have the Victims’ Law, but with guarantees.