Welcome to LAWG’s Colombia News Brief, a compilation of the last week’s top articles and reports on issues of peace, justice, human rights, and more in Colombia. 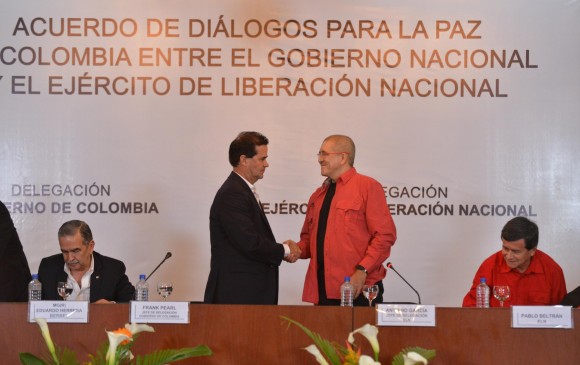 The Politics of Peace

• Colombian Rebels Start Their Transition to Peace
Kejal Vyas, The Wall Street Journal, February 5, 2017
“Most of the guerrilla force is expected to have assembled in the next few days as government contractors scramble to build housing. President Juan Manuel Santos and his aides have acknowledged difficulties in getting promised supplies to the camps, citing their far-flung locations. But they said they were still on track to have the majority of the rebels disarmed by June, except for about 5% of FARC combatants whom they expect to abstain from the peace. Colombia’s Defense Ministry has said it plans to pursue dissidents as organized-crime gangs.”

• Unease in Colombia, as Old Enemies Become New Neighbors
Nicholas Casey, The New York Times, February 4, 2017
“After a half-century of war, Colombia’s rebels are disarming, preparing to enter civilian life under the peace accord signed last year. In this mountain town, a new settlement of former fighters, 80 strong and growing, is taking shape, one of many scattered across the country.”

• Peace Accord Implementation Begins in Colombia: FARC Guerillas Enter Concentration Zone
Lisa Haugaard, Latin America Working Group, February 6, 2017
“Arriving by foot, river boat, bus, mule, and truck, some 6,500 members of the FARC guerrillas have now moved into special agreed-upon zones as the new peace agreement is starting to be implemented. During a 180-day period, they are beginning the process of being reintegrated into civilian life. All members of the FARC guerrillas are scheduled to turn in their weapons by the end of this period.”

• Corruption: Last Hurdle for Colombia’s Post-Conflict?
Alexandra Bush, The City Paper Bogota, February 8, 2017
“President Juan Manuel Santos publically declared last month that the fight against corruption is his number one priority for 2017. This comes as the ratification of the peace accords and shift into the post-conflict period mark the beginning of a new political era for Colombia. While the disarmament and reintegration processes will be drawn out, space has been cleared in the political landscape for other issues to be foregrounded, and the theme of corruption is becoming increasingly prominent.”

• Red Cross urges Colombia’s FARC to Release Child Soldiers
David Maas, Colombia Reports, February 8, 2017
“The head of the International Committee of the Red Cross (ICRC) called on Colombia’s Marxist FARC rebel group to speed up the release of the child soldiers among their ranks, in an interview with El Tiempo.“We must move from word to action in the case of the FARC children,” Christoph Harnisch said.”

• The Continued Importance of U.S.-Colombia Solidarity in the Trump Era
Chelsey Dyer, NACLA, February 2, 2017
“Since the historic November 30th ratification of the peace accord in Colombia between the FARC and the Colombian government, 15 activists have been killed, most recently Emilsen Manyoma Mosquera and her partner Joe Javier Rodallega. They were killed in the wake of an international celebration of the long-last ratification of the Colombian peace accords between the FARC and Colombian government.”

Ongoing Peace Talks with the ELN

• Colombia: Talks with ELN Rebel Group Begin
BBC News, February 8, 2017
“The negotiations were launched at a ceremony in the capital of Ecuador, Quito, where the talks will be held.Delegates stood side by side as the Colombian national anthem was played.The talks come just months after the government signed a peace agreement with Colombia’s largest rebel group, the Farc.”

• Colombia’s ELN Peace Talks Explained
Geoff Ramsey and Sebastian Bernal, WOLA, February 7, 2017
“While most attention on Colombia’s armed conflict has focused on the roughly 7,000-strong FARC, the ELN—with up to 2,000 members—retains an active presence in the country, mostly in northeastern Colombia though their influence also extends to Chocó and other parts of the Pacific coast. With the FARC beginning to demobilize, there is concern that the ELN, along with criminal organizations and neoparamilitary groups, could move to fill territorial and economic power vacuums that the FARC leave behind.”

• Colombia Peace Talks Open with Second Rebel Group: Process Might Provide Model for Civil Society Participation
Ginny Bouvier, Colombia Calls, February 6, 2017
“The government and the ELN already had set an agenda and methodology for formal negotiations, but the launch has been delayed repeatedly. A major obstacle was the ELN’s continued detention of Odín Sánchez, a former Colombian congressman from the Chocó region. The ELN released him last week, in exchange for a government pardon for two jailed rebels. Other factors that delayed the start of formal talks included new government conditions after the two sides had announced terms for the process, and the unforeseen renegotiation of the peace agreement with the FARC after voters rejected it in an Oct. 2 plebiscite. Colombia’s Congress ultimately approved a renegotiated pact with the FARC.”

• Talks with ELN Launched Tonight
Ginny Bouvier, Colombia Calls, February 7, 2017
“The talks are critical to moving Colombia toward what is being called “complete peace”. This week, thousands of FARC troops left the jungles and 5,784 of 6,300 FARC guerrillas began settling into 26 hamlets and centers designated as transitional zones (ZVTN)  established for their transition into civilian life.  While the State is stepping up its presence in the zones frequently lands and corridors of high value for illicit trade, being abandoned by the FARC, these territories will quickly become contested  among the remaining armed groups and criminal organizations.  A peace agreement with the ELN would remove yet one more armed group from the playing field.”

• Chiquita Guilty of Crimes Against Humanity in Colombia?
Adriaan Alsema, Colombia Reports, February 3, 2017
“Companies who financed paramilitary death squads in Colombia’s banana growing region, including Chiquita’s subsidiary, will face charges for crimes against humanity, the Prosecutor General’s Office said Thursday.The prosecution decision is unprecedented as never before have private enterprises been charged with crimes against humanity.”

• Dole and Del Monte Also Facing Crimes Against Humanity Charges for Financing Death Squads in Colombia: Report
Adriaan Alsema, Colombia Reports, February 4, 2017
“Colombia’s prosecution is set to charge almost 200 companies, including multinationals like Dole and Del Monte, for financing death squads in the banana-growing region of the country, according to Blu Radio.”

• Colombia: new report depicts difficult humanitarian situation in border areas
UNHCR, February 3, 2017
“The report shows that despite the efforts made by national and local institutions to assist victims of the armed conflict, clear gaps remain, in particular in terms of access to State services and prevention of forced displacement, loss of property and child recruitment.” Full report (in Spanish)

• Wayuu Calamity Shines a Light on Colombia’s Forgotten Rural Poor
John Otis, NPR, February 7, 2017
“The economic meltdown in Venezuela is contributing to Indian children across the border in Colombia dying. Health experts say the Wayuu tribe has been particularly hard-hit.”

• Groundbreaking Win for Indigenous People in Colombia
Global Research, February 9, 2017
“The Colombian Constitutional Court has found in favour of an indigenous peoples’ centuries-old fight for their territory, granting the petition for the protection of constitutional rights requested by the Embera Chamí people of the Indigenous Resguardo Cañamomo Lomaprieta, in western Colombia.”

• Colombia: Yet Another Indigenous Child Dies of Hunger as Leaders Clamor for Rights
Telesur, February 6, 2017
“Another Colombian infant has died in the little-known but grave crisis of child malnutrition and poverty rocking the Wayuu Indigenous community in the northeastern department of La Guajira, where Indigenous leaders have faced an escalation of repression in recent days for defending their land rights in the face of unwanted corporate projects.”

• 10,000 Colombian Families Given Land for Abandoning Coca Crops
Telesur, February 7, 2017
“Colombia announced on Monday that 10,000 families that have abandoned coca cultivation will be granted land titles in the country’s southwest region as part of the transition to peace and as a way to support the rural economy.”

• Colombia Coca Farmers far from Happy about Eradication and Crop Substitution Plans
David Maas, Colombia Reports, February 8, 2017
“With the FARC in the process of leaving behind their areas of influence to demobilize and reintegrate into society, coca growers in Colombia are increasingly worried about their safety and livelihood.This is the case especially in southern Colombia, in the departments of Nariño, Cauca and Putuayo, where nearly half of the country’s coca is grown, according to RCN Radio.”

*The Colombia News Brief is a selection of relevant news articles, all of which do not necessarily reflect the viewpoint of the Latin America Working Group.