Colombia: On Assignment in Soacha

(Bogota) May 14, 2012 — It is easier to be optimistic about the humanitarian situation in Colombia from within the confines of the vibrant city centers of Bogota, Cartagena and Barranquilla. There the thriving economy, spurred by a surge in foreign investment, reports of a growing middle class and the general warmth of the Colombian people can lull you into feeling that all is well in Colombia, that the nearly 50 years of civil war have been left behind and that the shadowy illegal armed groups who leave terror in their wake have all but been defeated.

But crossing just over the city lim 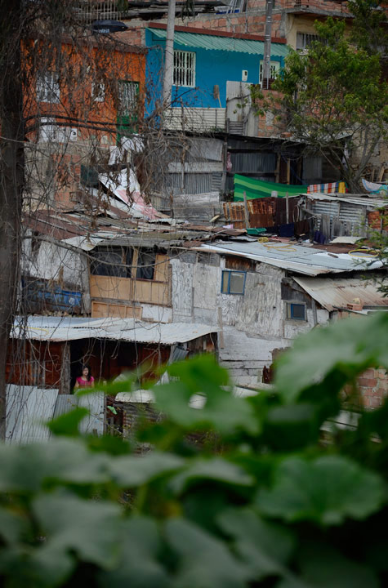 In Soacha more than 30,000 residents have been registered as displaced in a city with a population of about 400,000. The displaced arrive from throughout the country, seeking the security and services of the Bogota environment but unable to afford rent within the capital. (Christian Fuchs — Jesuit Refugee Service/USA)its of Bogota into the sprawling urban environment of Soacha, walking the neighborhoods of the bustling port city of Buenaventura, and traversing the Calima and San Juan Rivers shed light on a different story — the story of a Colombia still trapped in civil war where human security — the basic human right to get through the day free of the threat of torture, kidnapping or death — continues to be a grave challenge.

In Soacha more than 30,000 residents have been registered as displaced in a city with a population of about 400,000.(1) The displaced arrive from throughout the country, seeking the security and services of the Bogota environment but unable to afford rent within the capital.

We met with the JRS team, and a displaced leader who has been instrumental in teaching a group of 26 women how to use organic farming techniques to improve food security for families in her neighborhood of Soacha. Each family participating in the project now has a small plot of land on which they plant squashes, fruit, tomatoes, cucumbers, herbs and other staples.

Sponsorship and accompaniment by Jesuit Refugee Service has also enabled the mothers of the community to have taken classes in emergency healthcare and contingency planning.

We sit in Doña Katia’s (not her real name) large garden plot, surrounded by her orchids and bonsai trees, her lemon balm, papayuellas, mint, squashes and other crops, a verdant scene that is juxtaposed with the heavily eroded cliff-side that faces us over a dusty valley. Sandstone mining trucks are busily at work on the dirt roads in the valley, the combination of their open loads and churning tires kicking up a filmy, red-brown silt that soon coats our skin.

Doña Katia sends a worried look in the direction of her ten-year-old daughter as the outgoing youngster clears her throat and produces a croupy cough. Many of the children in the community have lung problems attributed to the constant dust kicked up from the 30-some mines that pepper the Soacha landscape.

Only a handful of the mines have permits, the rest are illegally plundering the minerals of the community while causing water contamination, erosion and subsequent vulnerability to flooding.

We hear the story of the community’s civic engagement and their work with the local mayor’s office to raise the communities burgeoning concerns surrounding threats and disappearances connected to paramilitary groups, and the problems wrought by illegal sandstone mining.

Access to quality healthcare and adequate education and the services due to displaced people under Colombia’s progressive legal framework are likewise principal concerns of the community. As the paramilitary groups encroach on more and more of the urban landscape intra-urban displacement has become a growing problem.

The FARC are said to be a still ominous presence in the rural territories surrounding Soacha, continuing their practice of preying on the local population, forcing them to pay war-taxes and attempting to forcibly recruit young people.

My next On Assignment will explore the reality conveyed during our explorations of the Valle de Cauca region.

1. According to the 2005 census. Anecdotal reports gathered on this trip peg the population at closer to one million.