“I am happy to have this honor,¨ said one of the finalists for Colombia´s second annual National Prize for the Defense of Human Rights in Colombia. “But I am torn, because while I am here, I am thinking about my community, which is still at risk.” Despite peace talks, despite the Colombian government´s optimistic picture of an improved Colombia, the war grinds on, and the threats continue from paramilitary groups, army, guerrillas, mining companies, lumber, and palm plantations.

But the prize offers a moment of celebration of the creative, indomitable and collective spirit of Colombia’s human rights community. 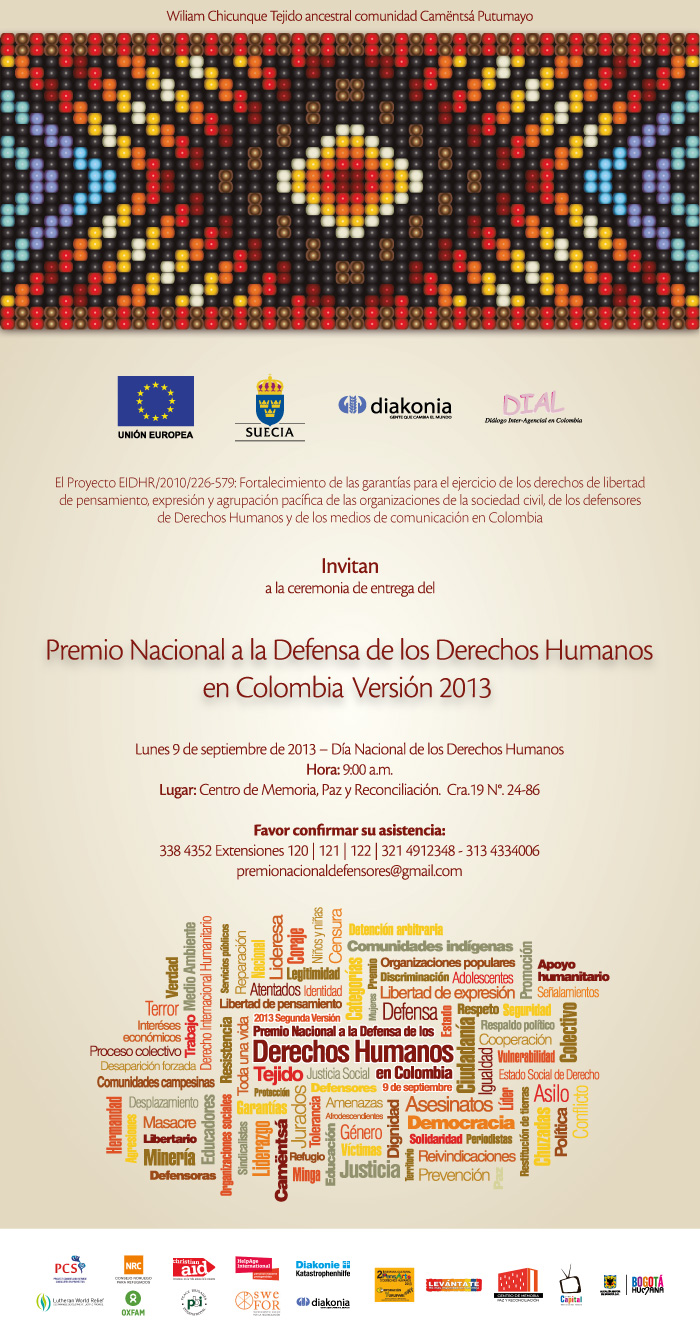 Islena Rey Rodríguez, Defender of the Year.  Islena is a founder of the Comité Cívico por los Derechos Humanos in Meta.  The Comité Cívico brings together community, religious and union leaders to organize against intensive human rights abuses in the region and for respect for human rights and social inclusion.  In its quarter century of struggle, several committee members were killed and the committee had to move its operations temporarily to Bogota.

Asociación de Familiares de las Víctimas de los Hechos Violentos de Trujillo (AFAVIT), winner for collective grassroots process.  Trujillo is the site of brutal massacres, torture, disappearances and displacement by paramilitary groups and members of state security forces, particularly from 1986 through 1994.  The family members united in AFAVIT waged a struggle for justice, which resulted in an Inter-American Human Rights Commission ruling, an apology from the Colombian government, and the construction of a memorial park. But most of the crimes remain unpunished, and the threats against the family members and their supporters continue even today.

Grupo Interdisciplinario por los Derechos Humanos (GIDH), winner for collective NGO process.  This Antioquia-based organization is a leader in strategic national and international litigation and providing protection and accompaniment to victims. It just had to close its doors in Medellin due to the high level of threats it is receiving.

Father Alejandro Angulo Novoa, Centro de Investigación y Educación Popular (CINEP), winner of the prize for a lifetime of defending human rights.  The Jesuit organization CINEP is renowned for its combination of effective research and dynamic social action.  Father Angulo has dedicated his life to social investigation and support of the poor and excluded.  He has specialized in collecting human rights documentation and training others in this important field.

Among the other inspiring finalists for the prize are three Afro-Colombian community organizations from the Pacific Coast.  The Consejo Comunitario de la Comunidad Negra de La Toma is organizing with great creative spirit against mining operations.  The Comunidad de Autodeterminación, Vida y Dignidad de Cacarica (CAVIDA) against enormous odds has maintained a “humanitarian zone” to protect itself from armed actors.  And the Coordinación de Consejos Comunitarios y Organizaciones de Base del Pueblo Negro Del Pacifico en Cauca (COCOCAUCA) organizes collectively to protect Afro-Colombian communities´ territory from encroachment by armed actors and large-scale mining and agro-industrial projects, and has launched a “peace school” to train a new generation of leaders.

The prize ceremony took place in the new Center for Memory, Peace and Reconciliation and was attended by the Vice President of Colombia, the United Nations and European Union.  The prize is sponsored by DIAL, a network of international humanitarian agencies in Colombia. LAWG was deeply honored to collaborate as a juror for the prize.

Vice President Garzon in his address congratulated the nominees and called for support for the peace process.  “All of us, all of us, have lost with the war. We have gained nothing from war.  The most revolutionary action is to support peace.”

A poem from the memorial park for the victims of Trujillo explains how Colombia´s human rights community continues to work together, despite tremendous risks and obstacles, for respect for human rights, dignity and life.

This isn´t a place of the dead, it is a garden of the living, it has the scent of resistance,
It is historic memory, subversive denouncing.
It is the sorrowful grief of crying and suffering,
it is a dream and utopia of a new society.