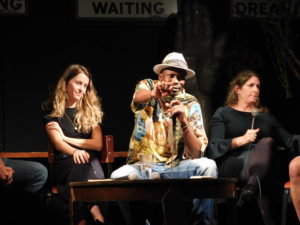 At least 342 community leaders have been murdered in Colombia since January 2016, including 93 since the start of this year. Colombian human rights activists demand action from their government to stop the violence. And they will not be silenced: “Ni un minuto de silencio”—“Not a minute of silence”—as they honor these leaders and work to build a peaceful and just society.

To respond to this emergency situation, in September 2018, the Latin America Working Group, along with the Center for Justice and International Law, the Colombia Human Rights Committee, the Washington Office on Latin America, and the Colectivo de Abogados José Alvear Restrepo, hosted a delegation of human rights defenders and filmmakers from Colombia to present a new documentary titled They’re Killing Us (Nos Están Matando). The film follows two social leaders, Héctor Marino Carabalí and Feliciano Valencia, who are risking their lives to protect their communities. Through their stories, the documentary calls attention to the dangers human rights defenders in Colombia face every day. As noted in the film, in Colombia, a social leader is killed every 4 days.

At the documentary’s Washington, D.C. premiere before a packed house at Busboys and Poets, Héctor Marino Carabalí began his remarks with a message to those who had come before him. As he stood in front of images of Mahatma Gandhi, the Dalai Lama, and Martin Luther King, Jr., he said, “I ask permission of my ancestors and my elders as we begin this event. I consider this a historic and sacred place. I knew that as soon as I walked through the door and saw these leaders who have fought for human rights, for life, for fraternity, and for peace.” Héctor is an Afro-descendent social leader from Northern Cauca and founding member of Renacer Siglo XXI, a victims’ rights group.

Héctor explained that the very reason the Colombian government and the FARC even came to sit together to negotiate in Havana “was not because of their own will, but more so because of the demands of organized groups and the historical struggles we—the indigenous, peasants, and Afro-descendants—have had. We’ve defended the accords with our very lives, and it worries us now that there are initiatives that go against the peace accords.” Warning that the accords are in jeopardy of being dismantled and ignored under the new government of Colombian President Iván Duque, Héctor called upon the audience to share a “message of solidarity.” He and human rights activists Soraya Gutierrez and Marco Romero brought one simple, clear message: to stop the violence against community leaders and human rights defenders and implement the historic peace accords faithfully and fully. The Colombian government must carry out the reforms promised in the agreement and bring the civilian part of the state into the conflict zones. 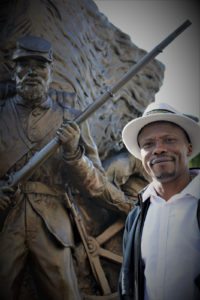 That same week, the delegation joined Representative Jim McGovern (D-MA) in Congress for another screening of the documentary. Héctor stressed several specific points of the peace accords that he sees as vital for long-lasting peace, yet are endangered by some of the new government’s initiatives. First, he spoke of Point 4 in the accords—which addresses the issue of illicit crop cultivation—emphasizing that the new government should follow what was agreed on. “Past policies have condemned the small farmers, the lowest and smallest link in the illicit chain, and they have ignored the public health aspect,” he noted. He also denounced plans to restart aerial fumigation programs and warned of their harmful effects. Another crucial aspect of the accords Héctor highlighted is Point 1, which outlines a comprehensive rural reform. Héctor said progress on this point is “stopped as of now. We have not had any effective dialogue with the new government to observe the implementation of this plan.” Finally, he called attention to the need to safeguard the specific measures agreed upon to provide reparations and protections to indigenous and Afro-descendant communities.

Toward the end of the discussion, Héctor shared the most recent threat to his life. He recounted that on July 10, he “received death threats from the Black Eagles,” a paramilitary group targeting social leaders in the region, and on July 11 came “the disappearance, torture, and, later, murder of my cousin, with whom I worked in all of the regional and national processes I’ve mentioned.” Héctor then was forced to leave Cauca to protect his family and himself.

His community and his predecessors are the reason he continues to strive for justice. “Many have left us, because they fought for life, for peace, for a better Cauca and a better Colombia. Their bodies are gone, but their fighting spirit is still with each and every one of us.”

Filmmakers Tom Laffay, Emily Wright, and Daniel Bustos hoped They’re Killing Us would call attention to the alarming increase in threats against community leaders like Héctor. As Emily said, “The burden of peace rests on these people, and they’re being killed.”

You can watch the documentary and request a screening in your community by going to www.tomlaffay.com/theyre-killing-us/ or by emailing Tom at tplaffay@gmail.com.