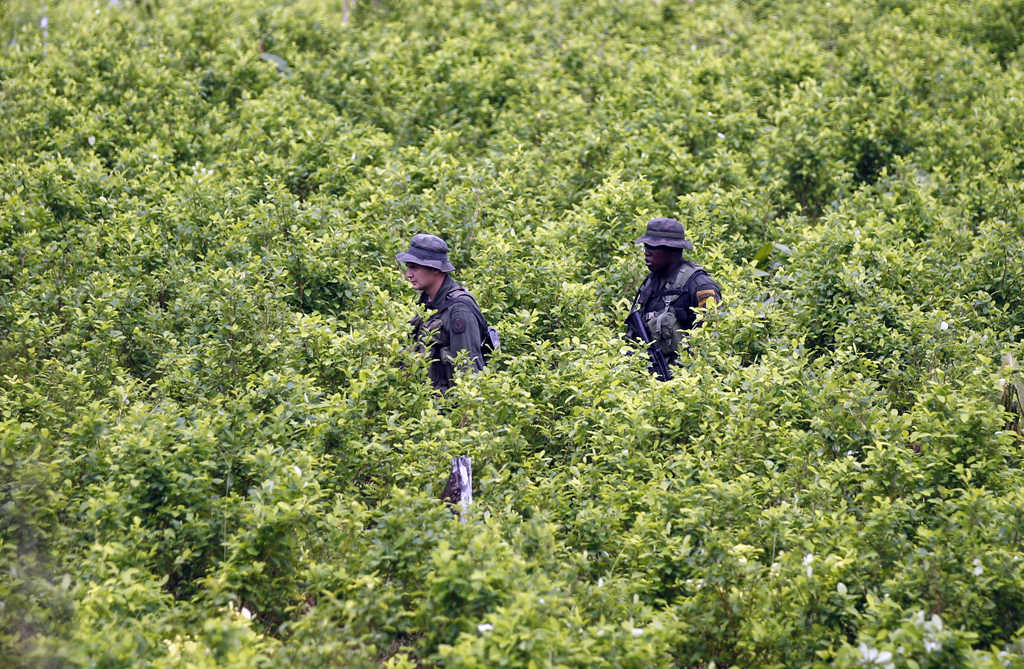 Colombia’s government has declared an ambitious plan to eradicate 100,000 hectares of coca crops by the end of the year, but an analysis of the program so far casts doubts on the ability of the government to prevent illegal armed groups from regenerating the vicious criminal circle.

The thesis of the new report entitled “What’s happening with the substitution of illicit crops?” from the Ideas for Peace Foundation (Fundación Ideas para la Paz – FIP), a leading think tank on the post-conflict in Colombia, is that the government’s crop substitution plan is failing to provide adequate security measures and sustainable alternatives in communities historically hit hardest by the armed conflict.

The report comes as the Revolutionary Armed Forces of Colombia (Fuerzas Armadas Revolucionarias de Colombia – FARC) relinquish their control over an estimated 60 percent of the world’s most productive coca crops as part of a peace process the rebel group signed with the government in 2016. The FARC earned anywhere between $200 million and $3.5 billion a year from the cocaine distribution chain, and filling the void left by the FARC following their demobilization is the government’s greatest challenge.

To that end, the government has set a lofty goal of clearing 100,000 hectares of coca off the criminal books by the end of 2017. As outlined in its National Comprehensive Program for the Substitution of Illicit Crops (“Programa Nacional Integral de Sustitución de Cultivos de Uso Ilícito” – PNIS), the government is relying on the Ministry of Defense to eradicate 50,000 hectares by force, while the other 50,000 hectares will come from voluntary replacement by farmers.

PNIS, created under Article 4 of the 2016 peace deal and implemented in late January of this year, offers participating coca-growing families financial incentives to trade in their illicit crops for legal alternatives, like cacao and coffee. FIP estimates that in order to meet its objective, the state must ensure that an average of 330 hectares is eradicated each day for substitution purposes alone.

On the surface, it seems to be going pretty well. The report says that over 75,000 farmers in 13 departments have signed on, amounting to an estimated 79,191 hectares of coca that could be substituted, in exchange for a payout of about $11,000 per farmer over the course of two years, according to FIP’s data. The government has now begun to deliver the first subsidies to the f`amilies that agreed to replace their coca fields. With the first disbursement, families are expected to clear the crops in approximately 60 days.

However, there is a major obstacle to success. According to the report, illegal armed actors are lying in wait, preparing to take control of coca production in territories previously dominated by the FARC. Though not a new phenomenon, the situation has worsened in certain regions in the last few months while national attention has been fixated on the FARC’s disarmament and relocation.

So-called “criminal bands” (“bandas criminales” or BACRIM) — especially the largest BACRIM known as the Urabeños — FARC dissident groups, and the remaining guerrilla organization known as the National Liberation Army (Ejército Nacional de Liberación – ELN) are moving in quickly to take over areas previously occupied by the FARC in order to expand their drug trafficking operations.

In some areas, BACRIM, FARC dissidents, and ELN guerrillas are directly preventing local coca farmers from joining the substitution program, the report says. According to FIP, transnational drug traffickers are putting pressure on local criminal groups to prevent small farmers from taking the government’s deal. (The argument to stay with coca is aided by the fact farmers say they can earn ten times more growing coca than any other crop, according to InSight Crime field research in coca regions.)

In Guaviare, dissidents of the FARC’s 1st Front, for example, have launched threats against families linked to the substitution program and recently kidnapped a United Nations official sent to introduce PNIS to the community. In Nariño, intimidation comes from the dissident militia of the FARC’s “Daniel Aldana” Mobile Column. In Cauca, according to FIP, the ELN continues to charge weight and toll for the use of routes; and in Putumayo, the traditionally urban La Constru criminal organization is strengthening its presence in rural areas to control cocaine production.

Even if the state does manage to crack down on coca production, criminal groups will still be able to resort to illegal mining as a stable source of funding.

A less discussed area of concern is the relationship between coca growing and illegal mining, which often go hand in hand in resource-rich areas, FIP said. The state currently has no specific plan to prevent coca farmers from transitioning into this parallel illicit economy, which is generally controlled by criminal organizations.

In departments such as Nariño and Antioquia, for example, there are clear overlaps of these two phenomena, with strict control of criminal organizations and the recruitment of the same labor force, according to the report. Evidence shows a close connection between the illegal drug economy and illegal mining, with a strong correlation between the price of gold and the number of hectares cultivated with coca. If the price of coca goes down, that same grower can start illegal mining, and vice versa.

The overarching problem is that the government’s plan to provide temporary financial subsidies to coca-growing families will not last in the long term, and national security forces cannot keep illegal armed actors from moving into areas the FARC has vacated.

Coca-growing municipalities are poorer than the rest of the country and have very low levels of institutionality. The prospects of coca production for a small farmer will not disappear after two years, and neither will the criminal groups pushing to keep the lucrative trade around. Without state protection, which has been weak in remote corners where organized criminal groups maintain a strong presence, farmers could be forced to turn their backs on the program — especially when their neighbors who joined are receiving death threats next door.

Fundamental problems are being exacerbated by the Colombian government’s rush to implement the program. Under strong international pressure to reduce coca production, especially from the United States, which recently pushed for a renewal of fumigation efforts, the state is scrambling to achieve immediate results, and thus jeopardizing a more long-term, comprehensive strategy aimed at rural development in the process.

This year, coca production surged to levels not seen in decades and continues to rise, even with eradication efforts underway. The increase is evidence of the fact that without effective state, infrastructure and private business initiatives to offer viable economic alternatives, the government’s policy will not endure.

Even if the government does manage to crack down on coca production, criminal groups will still be able to resort to illegal mining as a stable source of funding. Informal mining and the “blood gold” industry serve as a widespread and vital funding source for a variety of criminal organizations in the country, with recent estimates stating that 88 percent of gold in Colombia’s mines is extracted illegally, amounting to a loss of over $2 billion for the state.

In the immediate post-conflict, policymakers must define a specific strategy to prevent coca farmers from switching over to the parallel industry, but so far, they are ignoring the problem.

*This article was originally published on Insight Crime’s website here.