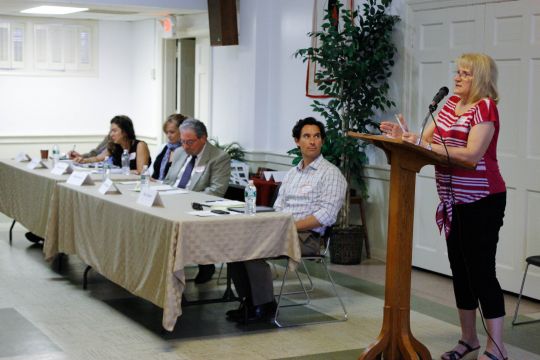 For more photographs from the Cuba Consultation 2015 and Advocacy Day,
visit our Facebook Photo Album.

During a two-day Cuba Consultation organized by the Latin America Working Group (LAWG) and the Washington Office on Latin America (WOLA), activists, academics, Cuban Americans, church people and interested individuals came together from across the country to discuss what is currently in the mix and what still needs to be done for U.S.-Cuba relations. 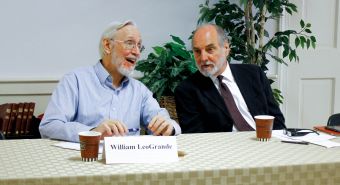 The Consultation kicked off with legal and political analyses by experts Bill LeoGrande (American University) and Robert Muse (Muse & Associates) on the recent developments since President Obama’s December 17th announcement, and the main obstacles that prevent normalization. The panelists began this introduction by presenting the deceivingly simple question: What does normalizing relations really mean? And how do we go about it?

The panelists lauded the significant achievements that have taken place in the last six months, including the release of Alan Gross and 53 Cuban prisoners, the return to Cuba of the remaining three of the Cuban Five, the growth of people-to-people travel and the meteoric demand for travel to Cuba, the removal of Cuba from the state-sponsors of terrorism list, momentum for restoring embassies in both countries (which has since become a reality), internet expansion (slow though it may be), and movement toward licenses for U.S. businesses to work with the private sector in Cuba. And yet, they acknowledged the depth of obstacles faced in current negotiations, such as restitution claims, the still-existent U.S. policy of regime change and “democracy promotion,” the Cuba Adjustment Act, Cuba’s desire to have the Guantanamo Bay military base closed and their territorial claim restored, and human rights violations (Cuba would say, in the United States, too). Without fully considering and compromising on these issues, is normalization achievable? As poignantly stated later in the day by Maria Isabel Alfonso from Cuban Americans for Engagement (CAFÉ), “We are not talking about engagement anymore, we’re talking about marriage. We’ve been engaged for three years. And marriage means putting everything out on the table.” 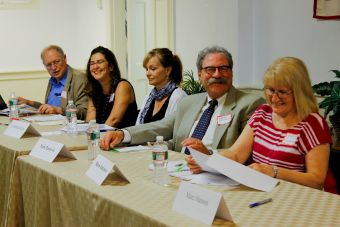 Furthermore, while President Obama has indicated his commitment to improving relations with Cuba, it is Congress who has to act in order to definitively lift the travel ban and the embargo, and repeal the codified Helms-Burton law of 1996. Aides from the offices of Senator Flake, Congressman McGovern, and Congressman Farr spoke of growing support for bills in both houses directed at ending the travel ban (S 299 and HR 664) and resuming trade (S 491). While in the past, leading voices from Florida or New Jersey were granted unquestioned authority on the Cuba issue, today, more and more members of Congress have taken a stance on policy towards Cuba, and are challenging the dominant narrative that previously prevailed. Different elected officials have become involved in U.S.-Cuba relations issues for very different reasons. While Senator Flake (R-AZ) views the issue from a libertarian standpoint based on the freedom of American citizens to travel anywhere they wish, Congressman McGovern (D-MA) spoke of helping both the Cuban people and U.S. economic interests through open discourse. Growing support for engagement with Cuba among congressional leaders (and clearly a large majority of the American public), is, in part, due to the broad coalition that this movement has inspired, between human rights groups, faith-based organizations, Cuban Americans, the agricultural sector, and the business community. While momentum in Congress has struggled to keep up with the overall energy across the country, the Senate, for one, has been able to achieve 45 signatories for its Freedom to Travel Act (S 299), and senators are optimistic that support for this bill will continue to grow, making its passage possible. Pressure on Congress does not mean, however, that we should forget about the Executive’s role in improving relations. While many think that everything is in Congress’ court now, there still are numerous actions that the President could take to help expedite the process—including decriminalizing the use of the dollar in international trade transactions, taking off as many restrictions on trade as possible, and rescinding the Cuban Adjustment Act, to name a few. 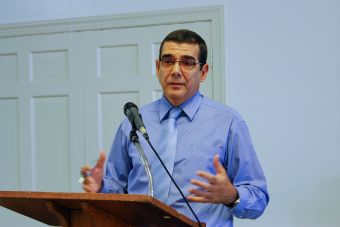 As the key-note speaker, Cuban Ambassador Jose R. Cabañas spoke of the importance of reciprocal and respectful negotiations in order to normalize relations. The United States has to see Cuba as an equal negotiator to achieve real progress in these discussions, said Cabañas. Notably, the United States has finally realized that it can no longer isolate Cuba from the rest of the region and maintain its exclusion from regional organizations like the Organization of American States (OAS), the Community of Latin American and Caribbean States (CELAC) and ALBA. Paradoxically, this attempt to isolate Cuba has contributed to increased isolation and decreased influence on the part of the United States in the hemisphere.

As became evident in the Consultation’s various panels, the Cuba issue can be framed from a variety of perspectives, including regional interests, medical collaboration, economic pursuits, and civil liberties. However, LAWG’s Mavis Anderson reminded the audience of the importance of the NGO voice in these broad-based coalitions. Diversity in the movement is important, including voices from the business and agriculture sectors, but the face of the movement can’t just be for-profit, pro-business, national-interest-focused groups. They are important in this fight, but shouldn’t be the only part. Through the NGO voice, our elected officials can see that engagement with Cuba is not just about U.S. interests or corporate profits, but it is the ethical thing to do. It is the best way to support the people of Cuba, promote cooperation, and demonstrate consistent foreign policies. Furthermore, the NGO voice sheds light on the more nuanced implications of U.S.-Cuba relations, thus presenting the movement to lift the travel ban as a point of entry, rather than the ultimate goal, while simultaneously focusing on social tensions, inequality, the trade embargo, and other more complicated matters.

The Consultation concluded with meetings on the Hill among participants and their respective congressional offices, where constituents sought to translate the discussions held at the Consultation into direct action—encouraging legislators to support travel and trade bills that are circulating in both chambers. Moreover, participants agreed to maintain a network of communication, using it to distribute policy notifications and share information on successful strategies in grassroots campaigns. Through these mechanisms we are able to foster continued dialogue, grassroots organizing, and strategic advocacy, bringing us closer to achieving our goal of normalized relations between the United States and Cuba. The time is now.