Cuba Summer Reading: Cuba 54, Everything About Cuba and More 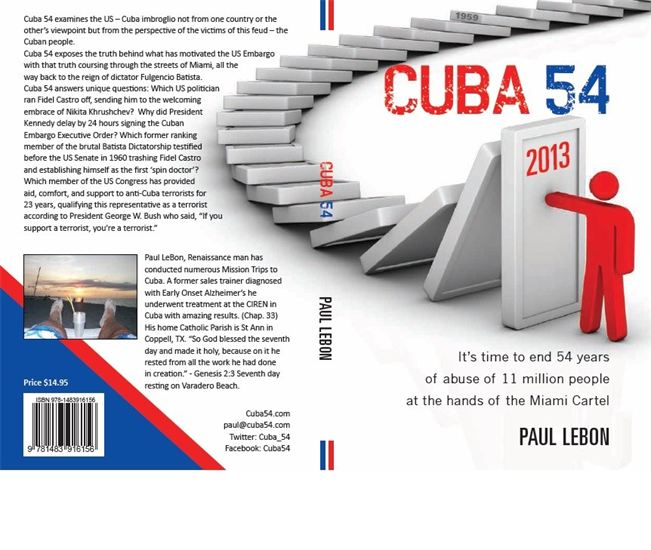 1. “When Cubans are waiting to enter a public facility and you arrive, you must determine who the last person is before you to arrive was and then you are now the last one – they do not form lines?”

2. “Cuba has good drinking water, and daily fresh baked bread in every corner of the street?”

3. “Pedestrians do NOT have the right-of-way in Cuba. Cars, trucks, and buses will bear down on you with the horn blaring?”

Through these and other insights, author Paul LeBon aims to give the readers of his newly published book “Cuba 54” a background on Cuba useful for any visit to the island. While the book would be a valuable addition to any traveler to Cuba’s reading list with these tidbits alone, what makes “Cuba 54” great is its desire to dig deeper. In fact, LeBon taps into his real life experiences and interaction with individuals across Cuba to find out “…why the whole Cuba debacle manifested itself, why things are the way they are, and how much better things could be.” This mini-encyclopedia on modern Cuba covers three main topics critical to understanding the country today: a general introduction to Cuban culture, the “Miami Cartel” and their operations in the United States, and what lies ahead for Cuba’s future.

LeBon begins his overview of Cuba with a brief historical analysis of the U.S. embargo (or in Cuba, el bloqueo) and its impacts. In particular, he focuses in on the economic hardships caused by the embargo for ordinary Cubans, such as restrictions on humanitarian aid and remittances, and the government-sponsored growth of the tourism industry since the 1990s. “Cuba 54” then transitions its focus to the extremist sect of the Cuban-American exile community in Miami, whom the author deems the “Miami Cartel”. LeBon provides the reader inside information on the workings of the Miami Cartel, from the influence “Cuba-centered” non-governmental organizations wield in politics to acts of terror committed by the group, perhaps most notably the bombing of Cubana Airlines Flight 455. LeBon’s research in “Cuba 54” sheds some much needed light on the greedy and amoral conduct of the Miami Cartel, and the support and protection they receive from some Cuban-American members of Congress.

In the final pages of the book, LeBon wonders how the changes currently underway in Cuba, such as the rise of entrepreneurs and the elimination of the exit visa for Cubans, will affect the relatively stagnant relations between Cuba and the U.S. He then concludes “Cuba 54” with reflections on his own nine trips to the island where he witnessed firsthand the power that initiatives such as people-to-people exchange have in debunking myths about life in Cuba and make dramatic changes on the outdated attitudes prevalent in U.S.-Cuba policy. Will LeBon’s vision of “sneakers on the street diplomacy” ever replace the notion of “democracy building” promoted by the Miami Cartel? We sure hope so…and that U.S. citizens will be able to experience Cuba for themselves, just like LeBon.

Cuba 54 is available on Amazon. Learn more about the book here: http://www.cuba54.com