Cuba: You Can’t Take Someone Else’s Word for It

Whenever I tell people I studied abroad in Cuba, I feel like the reactions can be categorized by two familiar emotions: curiosity and confusion. There are usually a lot of questions…How did I travel to a country that has been “off-limits” to U.S. citizens since 1961? What is it REALLY like? Did you see old American cars, smoke a cigar, and/or drink rum? From first glance, I also do not have any obvious connections to the island: I am a blonde haired, blue eyed girl from Wisconsin who did not meet anyone from Cuba until college and whose initial exposure to Latin America was through cheesy videos in middle school Spanish class… 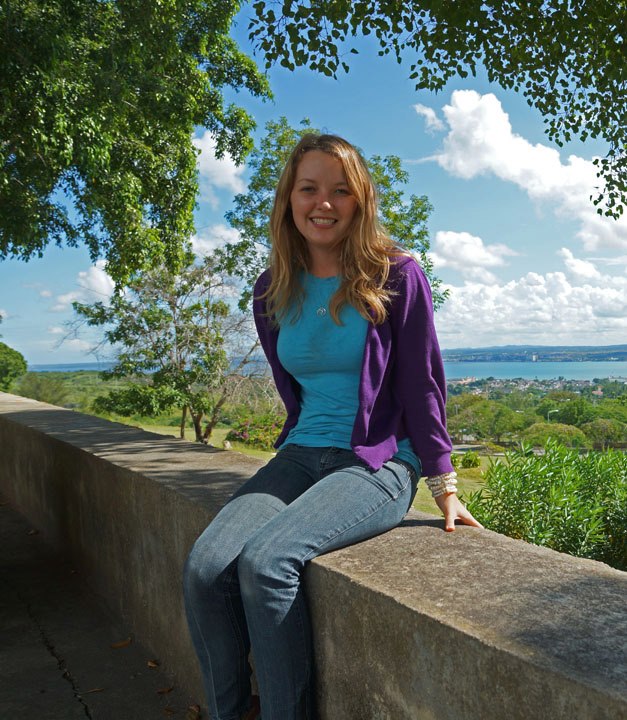 Author, Robyn Schowengerdt, in Matanzas, CubaWhile I can’t pinpoint my exact connections to Cuba, I can trace my initial interest in travelling to one person: my Grandma Chris. Grandma Chris loved to tell her grandchildren stories of far-away places, especially about the trips she had taken in her later years of life. By her seventies, she had travelled all across Europe. While her physical health had deteriorated, her spirit was still very much alive.

But there was one destination from her lifelong itinerary that stood out from the others: post-Soviet Russia in the early 1990s. At the time of her trip, memories of the Cold War were still fresh, along with the misperceptions promoted by both sides about “the other”. As she told my sister and me about the never-ending train rides and the conditions of life in the countryside, I remember how different this story was from the others. It wasn’t the typical tale of London or Paris. This journey seemed to really challenge her, to take her beyond her comfort zone. “You can’t take someone else’s word for an experience,” I remember her telling me then. “YOU have to find out things for yourself… Always keep an open mind, Robyn. Always keep learning each place you go and in each thing you do.” 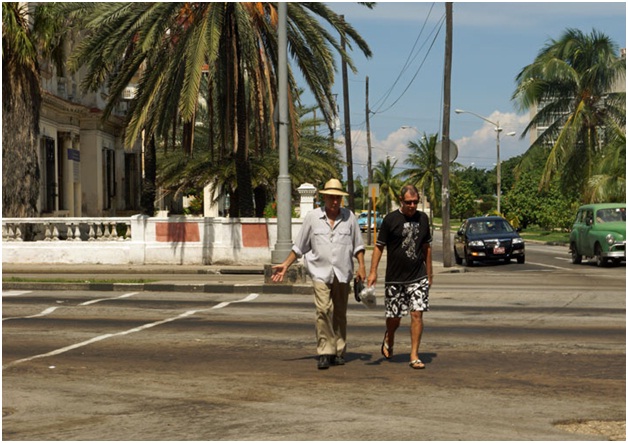 Years after I first heard this story, it was Grandma Chris’s courageous and curious attitude towards travel that inspired me to fill out the first forms to study abroad in Cuba. Although I had taken courses on Latin America, what I knew about Cuba then was mainly through the terrible images presented by the media…and the fact that I could not freely travel there as a U.S. citizen. In fact, the travel restrictions only deepened my curiosity in visiting the island. The more I learned, the more I wanted to find out what Cuba was like for myself – whatever that may be.

In April 2012, I found out that I was accepted into American University’s study abroad program for that fall!  As I finished my pre-departure homework and checked the last few items off of my packing list that summer, I made sure to stop by Grandma Chris’s place before my flight to Miami for a few last words of encouragement. On September 5, my charter flight dropped me off in Havana for three months of my life I will never forget.

My first memories of Cuba were kind of a blur…the hundreds of suitcases at the baggage claim of Jose Martí International Airport, billboards promoting the 53rd anniversary of the Revolution, my first tour around Havana in the stifling September heat. While I was only ninety miles away from the United States, I felt like I was in such a different place.  It was a lot to take in at times. But as my culture shock wore off and I began to settle into my life in Havana, I started to notice the things you only see when you live somewhere new for a longer period of time.

Walking to school one day, I watched an elderly Cuban woman weave through traffic with her hands full of groceries to cross the street. After staring in amazement, I made a connection – there were superabuelos everywhere I went!  They were shopping in the market, riding the guagua, playing domino in the street. Despite being one of the fastest aging countries in Latin America, older Cubans seemed to be enjoying active lives right alongside their younger counterparts. They reminded me of my grandma and her friends, passing the hours chatting and playing cards. Needless to say, I was fascinated. Wanting to learn more about aging in Cuba, I focused my semester-long research project on a círculo de abuelos (“Grandparents Club”) support circle sponsored by the Cuban Ministry of Health. 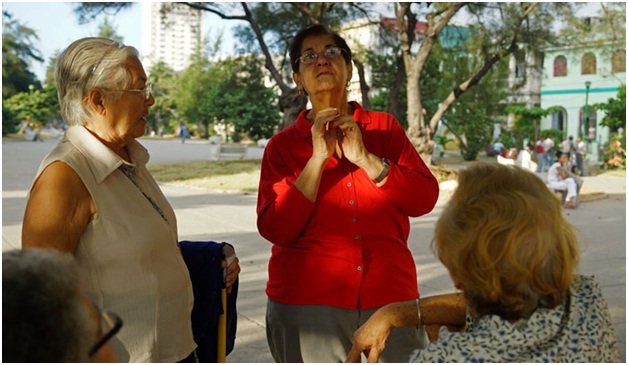 Members from the círculo de abuelos gather in the park at Linea y L in Vedado, La Habana, Cuba to catch up on the latest news before starting their morning exercises.The night before I presented my project proposal, I received a call you can only somewhat prepare yourself for: after entering hospice the week before, Grandma Chris had passed away from problems with her kidneys. I remember going to school the next day, and telling my classmates and professor through tears about how she was my interest and inspiration for my project on aging in Havana. While I could not attend the funeral in person or mourn with my family, I could honor her memory with this.

I decided to use my research project as a means of healing and to explore a pressing issue many people do not know about in Cuba. After my proposal, I had a one-on-one meeting with one of the círculo de abuelos members.  I was then invited to attend the morning meetings in a park near my school. Each Friday, I would watch círculo members start their days with a series of exercises and games, followed by a chance to converse with the other women in the group and plan for future events. The women challenged each other to continuously grow in body, mind, and soul, despite the hardships brought on by age and the lack of needed medical supplies caused by the U.S. embargo. 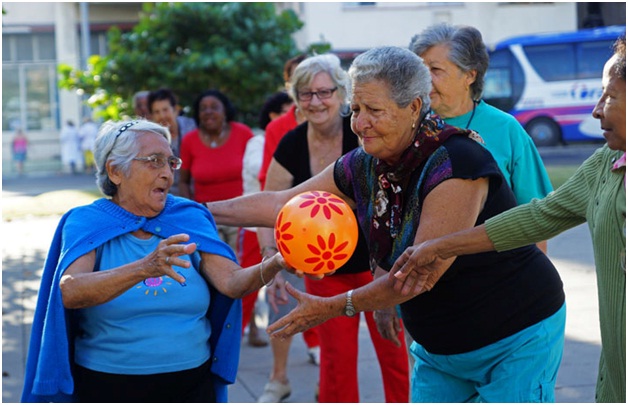 Things started to get heated in this morning’s relay competition…but teammates are always there to provide a helping hand and some words of encouragement.

In those early morning hours spent with the círculo de abuelos that November and December, I had a realization. How were these women any different than Grandma Chris or her friends? They were eager to talk about their relatives, neighborhood gossip….even to set me up with their grandsons who “would be really good for me”. They knew about my own Grandma passing away, and always made it known that they were mis propias abuelas en Cuba and gave me the community of support that everyone needs to get through hard times. 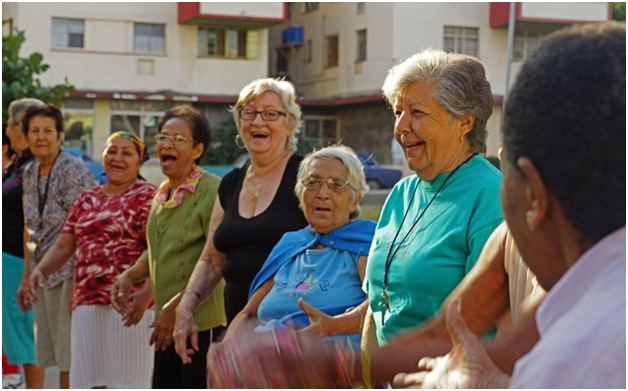 Every meet-up is full of lighthearted moments. In this case, fellow members couldn’t contain their laughter as the ball accidentally slips through one of the hands of one abuela during a game. After my time in Cuba and reflection after, one lesson I learned there still stands out to me: we tend to emphasize the differences far more than the similarities in relations between our countries. In the images and words we use to portray “the other”, we lose the experiences that unite us. Communities of support. The fun of playing a game like cards or domino. Good laughs in a conversation that goes on for hours. And it’s these memories that make me look forward to the day that I can freely return to Havana, along with every U.S. citizen who wants to find out what Cuba is like for themselves too.