Cuban Americans for Engagement (CAFE) came to Washington, D.C. this week to advocate for a re-establishment of relations between the United States and Cuba. CAFE was represented in Washington, D.C. by members from all over the country, including North Carolina, Texas, Washington, Colorado, Illinois, and Florida. The group attended meetings with various congressional offices, governmental agencies, and the Cuban Interests Section. Members of CAFE expressed new perspectives on U.S-Cuba relations and addressed the need to see improvement in the dialogue between the two nations. 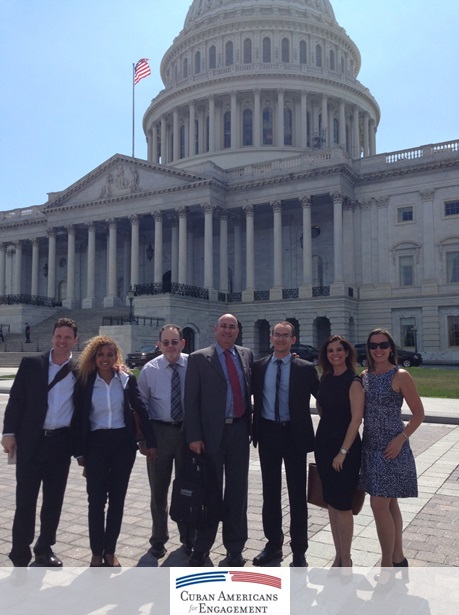 CAFE is an organization of Cuban and non-Cuban Americans who are aiming to disprove the notion that all Cuban-Americans share the same opinion. CAFE members call for a revision in policy between the United States and Cuba based on principles of exchange and diplomacy. The organization has been visiting Washington, D.C. annually for three years and come back to the nation’s capital with more members and growing support. The Latin America Working Group and Washington Office on Latin America have assisted CAFE with each visit.

This year, CAFE’s visit timed perfectly with the release of the most recent Florida International University poll, which states that a majority of Cuban-Americans from Miami-Dade County (the largest community of Cuban Americans in the United States) favor the normalization of relations between the United States and Cuba. Members of CAFE were able to share their reactions to the poll and use the data to show the multidimensional voices of the Cuban-American community. Representatives speaking on behalf of CAFE were from a variety of professions, from the travel industry to the agriculture industry. This diverse perspective gave fresh faces to the argument against the embargo and travel restrictions for U.S. citizens interested in visiting the island.

During various meetings, CAFE stressed the changing attitudes of younger generations of Cuban-Americans, and a desire to change tired U.S. policy towards Cuba. CAFE suggested several steps that could be taken by the current administration in order to begin a dialogue with Cuba. These steps included granting general licenses for all purposeful travel, removing Cuba from the State Department’s List of States that Sponsor Terrorism, and opening up dialogue between the two governments on the detainment of Alan Gross and the remaining imprisoned three of the Cuban Five.

“Most of us within the Cuban-American community are ready to have a new conversation about U.S. policy toward Cuba. We hope the president is too.”

After a busy week in Washington, D.C., CAFE members headed home to their respective states to continue speaking out against U.S. policy towards Cuba.