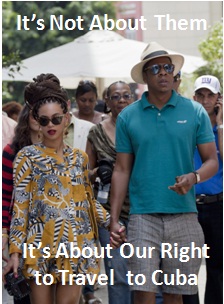 The House Appropriations subcommittee on Financial Services and General Governmental passed the Fiscal Year 2014 Financial Services bill this past Wednesday. This bill often contains Cuba policy language, so it is one that we monitor quite closely.  Again, some members of the subcommittee have decided to use this bill to attempt to change current foreign policy towards Cuba. How? The legislation aims to eliminate educational exchanges that are not “for-credit” or pursuant of a degree.  This basically means the elimination of people-to-people travel, recently made famous by Beyonce and Jay-Z’s trip to Cuba last April.

Check here to see if your member of Congress sits on the House Appropriations Committee and call her/him today to strongly share your opinion that you do not support restricting U.S. travel to Cuba and that you do not want people-to-people travel eliminated.

So far this bill has only passed through a subcommittee and we have time to raise our voices before it reaches the full Appropriations Committee.  Long time advocate for improving U.S.-Cuba relations, Rep. Jose Serrano (D-NY) who is also a member of the House Appropriations Committee told Politico, “This is the Jay-Z, Beyonce Bill…Absolutely [it’s a response to the trip], and it’s playing to the audience in Miami.” At LAWG we’d specify that it’s a response to the minority of Miami that opposes improving relations between the United States and Cuba.

The last time that the House attempted to attach policy oriented amendments to an appropriations bill, President Obama issued a veto threat stating that if he was presented with a bill that would make changes to his current policy towards Cuba, the bill would be vetoed.  In the end, the language was taken out. We need to make history repeat itself this time.

If your member is not listed in the link above (or even if they are too!), make a call to the White House Comment Line 202.456.1111 (recorded comment line) or 202.456.1414 (switchboard) and let the President know that he took a positive step in liberalizing travel regulations and he needs not only DEFEND these measures but also EXPAND them and grant general licenses for all categories of travel.

A call to your members of Congress can make all the difference to fight off this negative legislation. Defend our right to travel and engage with the Cuban people!