Trump is at it again—attacking some of the most vulnerable. He made moves last Monday to further limit access to asylum. On top of unconscionable efforts like ripping families apart, he’s now proposing to charge asylum seekers an application fee while prohibiting them from working as they wait on our backlogged immigration system. And tasking border patrol agents with conducting credible fear interviews. This is illegal and absurd—by law, only asylum officers are trained to do this.

Trump says this is a response to the crisis at the border. The reality is that there is a humanitarian crisis, and the administration’s policies are just making it worse. And now the administration claims it needs even more money to respond. This is just a waste of taxpayer dollars and an assault on migrant and refugee rights. Call your members of Congress and demand they DEFUND HATE.

Just last week Acting DHS Secretary Kevin McAleenan testified before Congress in an attempt to justify outlandish funding requests. Not only has a record-breaking $51 billion FY2020 budget been proposed for DHS, but the Trump Administration is also requesting billions in a supplemental budget for DHS to finish out FY2019. This money would go towards increased border militarization and even more detention beds to lock up families and children. But DHS’ bloated budget doesn’t need more money to carry out its dirty work. It needs less. And the budget needs to be allocated in ways that promote humane treatment for migrant families and children arriving at our border and alternatives to detention that are community-based and nonrestrictive.

And that’s where YOU come in. Congress has the power of the purse, and your representative and senators respond to YOU. The supplemental budget is under debate right now, and Congress is set to make a decision at any moment. And funding for next fiscal year is also already under debate.

Script: “My name is _____, and I am a constituent from _____. I urge Representative/Senator _____ to cut funding for detention, deportation, and border militarization. I urge you to reject the supplemental budget request for the Department of Homeland Security (DHS) for fiscal year 2019 and to reduce DHS funding for fiscal year 2020. DHS must also be held accountable for rights violations of asylum seekers, refugees, and immigrants. I am alarmed by President Trump’s recent announcement to restrict asylum, and urge you to speak out against these changes. My community welcomes and values immigrants, and as someone who represents my community, I urge you to do the same.”

Now, get your friends and family to speak out too. Share your disapproval of DHS’ funding requests: 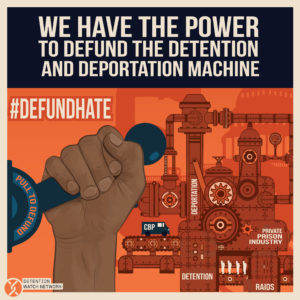 I demand Congress invest in families & communities, NOT in @DHSgov’s plan to rip apart families & turn away asylum seekers. I reject the supplemental budget request for FY19 & support cuts to DHS funding for FY20.

Speak out with me to #DefundHate > lawg.org/DefundHate

These increased funds to fuel the machinery behind unjust detention, deportations, and a militarized border will endanger lives, rip apart families, and hurt our communities. Your action is vital.