In old city Cartagena, Colombia, elegant colonial buildings with verandas and wooden shutters contain trendy restaurants, a Benetton store and expensive shoe shops.  But the Afro-Colombians selling strands of pearls on the sidewalks, who add  life to this tropical tourist haven,  may have come from Urabá, Carmen de Bolivar, Marίa la Baja or other areas where threats and clashes between all the armed actors, paramilitaries, guerrillas and the armed forces forced them to flee the violence.

“El Salado. Chengue. Montes de Marίa,” said the victims’ attention center official in a basement office in downtown Cartagena, rattling off the chilling names of places known for massacres, explaining why there are so many displaced persons in Cartagena. “Thirty-two percent of displacement happened in the Caribbean region. And it is still happening.”

And the pressures that force people off their land are right here in gleaming Cartagena.

We drive five minutes past Boquillo, an Afro-Colombian community which received titles in a post- Summit of the Americas ceremony presided by President Barack Obama, Colombian President Juan Manuel Santos and the rock star Shakira. 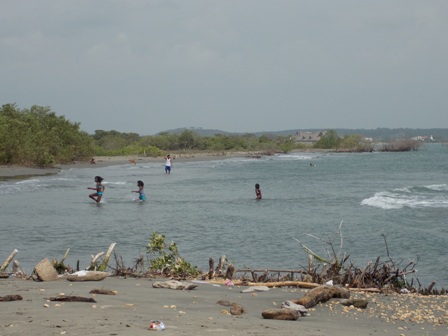 “This was my land, my grandfather’s land, my uncles’ land,” said a rather fierce woman who speaks a mile a minute.  “Everyone respected each other’s land. But the hotel just took it from us.  And then they built a canal to cut off access from our village to our land.”

The community had been living on this land over a hundred years.  We see the sprinkler system watering the golf course that is now sprawled on what had been her land.

Stacked on the beach by this poor community are huge pipes.  They are for a project to pump the sewage from Cartagena into the ocean right by Punta Canoa.

“They are not even going to treat the water.  And we live from fishing. This is a way of trying to take the land away from us…”

Earlier that day, we had piled into a wooden boat called “Thanks Be to God,” and visited the island of Tierra Bomba, right across from the stretch of beach with one soaring hotel after another, as well as the port society and a naval base.

Four Afro-Colombian communities live on Tierra Bomba.  These communities were resettled here from where they had lived by the Cartagena harbor when the oil company wanted to use the land eighty years ago.  “They told us we could have these islands, no one wanted them, they were full of mosquitoes.”  Yet their communities found “it is a privilege to live here… we want to continue to live here, deliciously.”

Eighty years later, the islands are prime real estate for the rapidly expanding tourist trade of Cartagena. And the Navy plans to expand, put a new naval base on Tierra Bomba island.

“What’s going to happen to us? No one will tell us.  They say, don’t worry, the naval base will be a good neighbor.  The vice president came and told us, there will be a ‘previous consultation’ with you before the base is developed…” But the communities haven’t heard about any such consultation yet. They have their doubts. 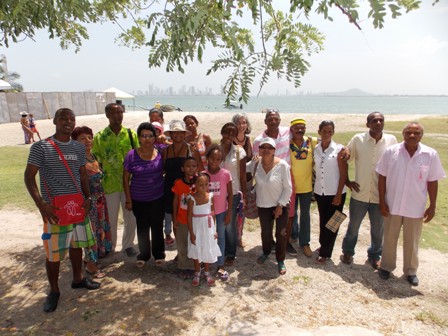 “There are 49 large-scale development projects coming our way, it’s a tsunamai. The companies all come with their studies, saying, don’t worry, nothing will happen to you.”  “They come buying up land at the price of a skinny chicken.”

“We don’t object to tourism, development. It will bring some jobs. We know we can’t stop it…. Count on us to support development that does not displace us.”

When Presidents Obama and Santos and rockstar Shakira handed out the titles for Boquilla and Palenque, it was a joyous day for those two communities.  But they gave title to only to a tiny fraction of the Afro-Colombian lands that should immediately be titled right in and around Cartagena, not to mention the rest of the country.

“Write this down in your notebook,” one island community leader said to me. “Unless we get title, we have nothing. We have nothing.”