Diana Nyad Makes the Swim from Cuba to U.S: An Inspiration to All

Diana Nyad has finally made it. Last Monday she swam onto the shores of Key West, FL, from the Hemingway Marina in Cuba. The 110 mile trek took 64-year old Nyad 52 hours, 54 minutes and 18.6 seconds. You can watch her arrival to Key West here. This is quite the monumental moment for Nyad who has been dreaming about completing her swim since she was 8 years old. This was her fifth attempt at voyaging the Florida Straits, and she claimed that it would be her final attempt even if she didn’t make it this time. 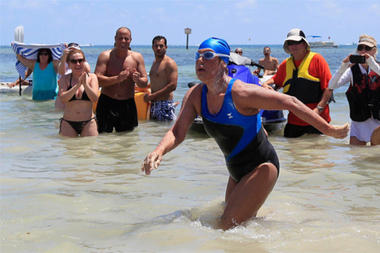 Patrick Oppmann, from CNN Havana  reported that “Even though Diana Nyad has now accomplished her goal of swimming across the Florida Straits she said she plans on continuing to return to Cuba. She said she’d like to find a project she can work on here, something like building a community pool in which she could teach Cubans about endurance swimming.” In an environment in which the U.S. and Cuba governments haven’t historically gotten along, Oppmann comments that “the fact that an American has come here and shown success in accomplishing her goals and has extended a hand of friendship to the Cuban people, that’s a message that we’re hearing is being very well received.” 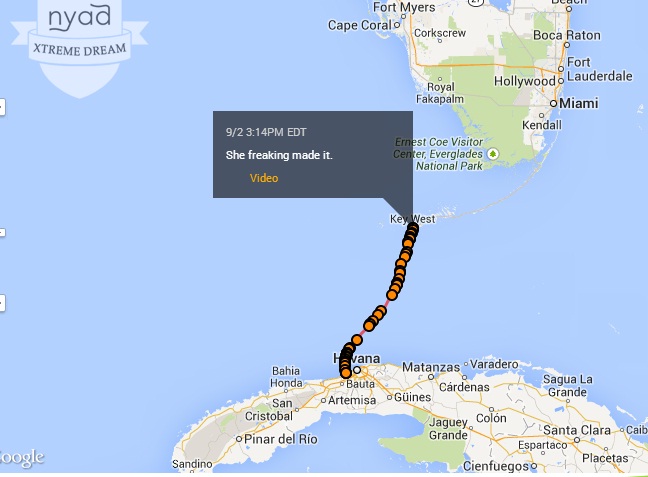 Not only is her dedication to this goal and her athleticism something to admire, her determination to never give up is a motivation for people from all walks of life. For us, she has created a testament to rejoining the people of Cuba with the people of the United States. Jose Miguel Diaz Escrich, the commodore of the Hemingway Marina and long time friend of Nyad, who helped arrange the logistics of her swim on the Cuban side, said that her accomplishment was “heroic.” He also commented to Fox News that, “More than the athletic feat, she wants to send a message of peace, love, friendship and happiness … between the people of the United States and Cuba.” This is the lost message of Nyad’s great triumph. While President Obama has made some changes to U.S. travel regulations to allow for meaningful exchange with Cuban civil society, U.S. law still inhibits us from having a normal relationship with Cuba. Nyad’s recent swim has set a precedent that this can change. Even President Obama tweeted his support saying, “Never give up on your dreams.”

And while we struggle through the days of being pessimistic and optimistic about realizing the dream of a normal relationship with Cuba, the feat that Diana Nyad has achieved will sit as an inspiration to us all who hope to see a productive future between the U.S. and Cuban people.