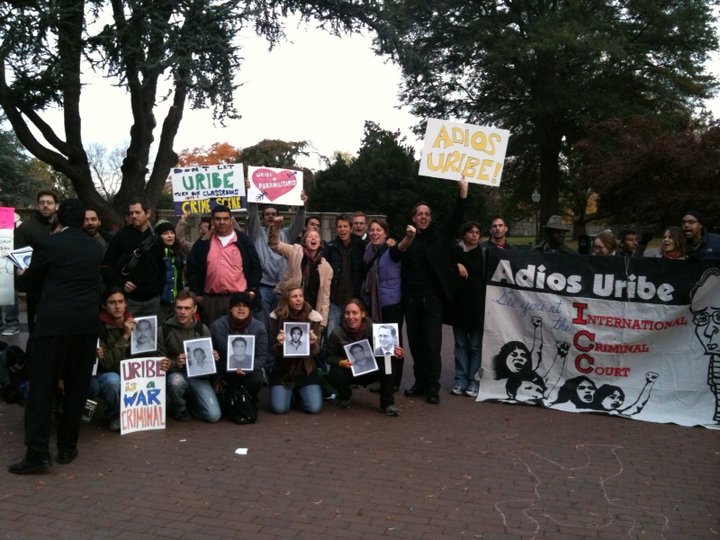 Perhaps when Former Colombian President Álvaro Uribe Vélez accepted a teaching position at Georgetown University’s School of Foreign Service just a couple months ago, he and the university leadership expected him to quietly come and go to his classes as other former heads of state had done before him. But to many students, professors and activists in D.C. and around the United States, this is no mere former head of state. As Georgetown Law student Charity Ryerson put it in a letter to the university, “Making him a ‘Distinguished Scholar in the Practice of Global Leadership’… is an offense to the thousands of victims of his administration, to the human rights community in the U.S. and Colombia, and is an embarrassment to Georgetown University.”

Soon after the announcement was made that Mr. Uribe would be teaching, Georgetown University students and local DC activists joined together to form a coalition they called “Adios Uribe.”  From the moment he stepped on campus in September, they launched protests, started weekly alternative teach-ins with victims of Mr. Uribe’s policies, and made their way into his classrooms to ask him tough questions.

The first letter, signed by over 150 scholars, used the text written by Colombian Jesuit priest and human rights defender Father Javier Giraldo calling on Georgetown’s president to remove Mr. Uribe from his post. In his letter, Father Giraldo asserts that Mr. Uribe created a “new pattern of legalized paramilitarism,” oversaw the practice of soldiers “murdering civilians, usually peasants, and after killing them, dressing them as combatants in order to justify their deaths,” and “used the security agency directly under his control (the Department of Administrative Security) to spy on the courts, opposition politicians, and social and human rights movements.” Since Georgetown is a Jesuit university, Father Giraldo reprimanded the university for not holding up their ideals, saying that “to offer a professorship to Álvaro Uribe, is not only deeply offensive to those Colombians who still maintain moral principles, but also places at high risk the ethical development of the young people who attend our university in Washington.”

The second letter, from many human rights NGOs and activists, mirrored Father Giraldo’s disappointed tone. “To those who have lost loved ones to abuses with the direct involvement or collaboration of government forces under the Uribe administration, and to the Colombian organizations that struggle for justice, these honors bestowed upon former President Uribe are a painful reminder of an unjust world,” it stated. This letter not only fleshed out similar concerns about Mr. Uribe’s human rights record, but also highlighted another key point about the former president’s dangerous stigmatization of human rights defenders. “Mr. Uribe showed an open contempt for human rights defenders and critics by making public statements that linked such persons to the guerrillas. Such statements were often followed by death threats, abductions and killings,” the letter contended.

Finally, last week, the stakes were raised a notch higher when Charity Ryerson served Mr. Uribe a subpoena to testify on November 22nd in the case against the coal mining company Drummond concerning its alleged collaboration with paramilitary groups in Colombia. Semana magazine reported, “According to the claimants, Uribe has ‘direct knowledge’ of various ‘key’ matters in the case, including the reach of military support used to ‘protect the Drummond mine installations in Colombia,’ the relation and level of cooperation between the military forces and the paramilitary group AUC… [and] the role of the Colombian Army in the covering up of ‘war crimes’ committed by the AUC.”

Now, just months after he stepped down from his post, the president who enjoyed a high approval rating in his country and was often applauded for his efforts by the international community is coming under fire in the media for the means in which he carried out his “democratic security” policies. Virtually every major newspaper in Colombia has been covering the protest. And a Newsweek article highlighted the “human-rights accusations [that] have dogged Uribe since he was governor of Antioquia in the 1990s… the so-called false-positives scandal… and the illegal wiretapping of human-rights workers, court justices, and Uribe’s political opponents.”

While the university has maintained its decision to keep Mr. Uribe on staff through all of this, the controversy around it has sparked an important conversation about the legacy of Colombia’s last president. As the Newsweek article observed, “Such sentiments fly in the face of the usual narrative about Uribe as a man who beat back a guerilla insurgency, significantly reduced coca production, and jump-started his country’s economy…[but now] the university, willingly or not, will continue playing host to a worthwhile debate.”