Are Your Valentine’s Flowers From Colombia?

Did you know that 60% of flowers bought in the United States come from Colombia? Nearly 100,000 mostly female flower workers have been working 16- to 18-hour days for poverty-level wages to get us the flowers that thousands of people will buy today.

This Valentine’s Day, take action to support these flower workers in their struggle for fair wages, equal treatment, justice, and dignity! 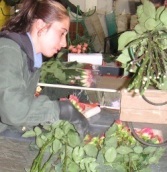 Who cut your roses? (Photo credit ILRF)Colombian flower workers are forced to put up with low wages and bad treatment, including sexual harassment, because when they try to organize they are fired—or worse. Even after workers lose their jobs for asking for better conditions and pay, employers violate their rights: the largest flower operation in Colombia, Floramerica, still owes back pay and severance to hundreds of workers it dismissed a year ago. It took 200 days of a 24-hour sit in for workers at one plantation, Splendor, to win their back pay in June 2011, but hundreds of workers remain unpaid. (To learn more about the plight of flower workers, check out this video.)

Colombian unions and our partners at the Cactus Corporation, USLEAP, and ILRF have asked us to help them turn Valentine’s Day into International Flower Workers’ Day in order to expose the conditions that face flower workers. Will you join us?

Workers in Colombia are not asking you to stop buying flowers this Valentine’s Day, as that won’t help them. Rather, send a message to the Colombian government asking them to crack down on employers who violate the law by failing to respect worker rights.

Colombia is notorious for labor violations, with more trade unionists murdered in Colombia every year than any other country in the world. As a part of the negotiations around the U.S.-Colombia free trade agreement (FTA), our government created a Labor Action Plan, which laid out key actions the Colombian government could take to curb violence against unionists and protect the right to organize. Although the vote has already happened in Congress, President Obama has said that he will not take the final steps to implement the FTA until this plan’s objectives are achieved. So now we need to hold him and the Colombian government to their word!

Over the past 10 months, the Colombian government has been making progress that looks good on paper, but we keep hearing from Colombian unions that little has changed in reality. Employers still keep trying to evade legally-required benefits and basic rights by treating permanent employees as short-term workers. People continue to be fired for organizing. And union members keep dying.

Send an email to the Colombian labor minister asking him to give us action rather than words on labor rights today!

For background information on women workers in the flower sector, see USLEAP’s report Gendered Injustice and ILRF’s Fairness in Flowers campaign. Then help us spread the word about International Flower Workers’ Day by sending the link to this alert onto your friends and family. (Use: http://bit.ly/xwJMpc )

Wishing you a day filled with love, friendship, and activism!