The buzz in Miami on March 15th could probably be heard all the way in Cuba. Last weekend, Cuban Americans for Engagement (CAFE), FORNORM (Foundation for the Normalizations of Relations with Cuba), Generacion Cambio Cubano and Cuba Educational Travel hosted a conference to highlight the growing majority of Cuban Americans that are in favor of normalizing relations with Cuba. 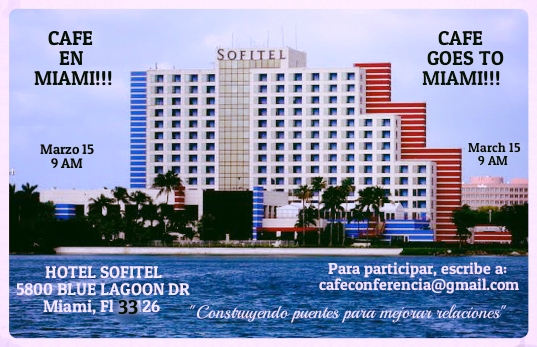 As highlighted on the CAFE website, the conference consisted of three panels to address:

1) changes taking place in Cuba from 2009 to the present, 2) dynamics of people-to-people contacts within the framework of the Obama Administration, 3) relations between the U.S. and Cuban governments: the impact on ties between Cubans on different sides of the Florida Straits.

About 125 attendees participated in panels all morning, which was then followed by an afternoon discussion for all participants to express their opinions, concerns and expectations about Cuba and its relationship with the diaspora community.

Hugo Cancio, publisher of OnCuba, a Miami-based magazine, told Reuters, “This is a historic event that unites different organizations that are willing to sit down and discuss ways to stimulate the normalization of relations. We want to tell the U.S. and the Cuban governments to find a way to better the lives of the Cuban people, and to let us participate in the economic transformation of Cuba.”

This call from the Cuban-American community echoes the poll recently released by the Atlantic Council that found 56 percent of Americans and over 60 percent of Floridians and Latinos favor changing U.S. policy toward Cuba. To further the point, 77 percent of Americans favor diplomatic coordination between the United States and Cuba on issues of mutual concern; 82 percent of Floridians favor this. It couldn’t be clearer: the nation and the majority of Cuban Americans want to see real CHANGE in U.S. policy towards Cuba. What could this change look like? President Obama has it in his executive authority to remove Cuba from the list of State Sponsors of Terrorism, where Cuba absolutely does not belong. He could also grant general licenses for all categories of travel so that eligible groups could actually carry out his January 2011 directive of reaching out to the Cuban people via “purposeful travel.” Currently, the Office of Foreign Assets Control (OFAC) continues to process license applications in a horribly slow fashion. This has prevented hundreds of groups from being able to carry out legal travel to Cuba as encouraged by the President.

Cuba policy can no longer be dominated by a handful of members of Congress. The majority of U.S. citizens including the majority of Cuban Americans are crying out to President Obama to see real change towards Cuba. President Obama, it’s now in your hands, the same hands you used to greet President Raul Castro; engage with Cuba now!