#GobiernoEspía: Spying and Violence Against Mexico’s Journalists and Rights Defenders 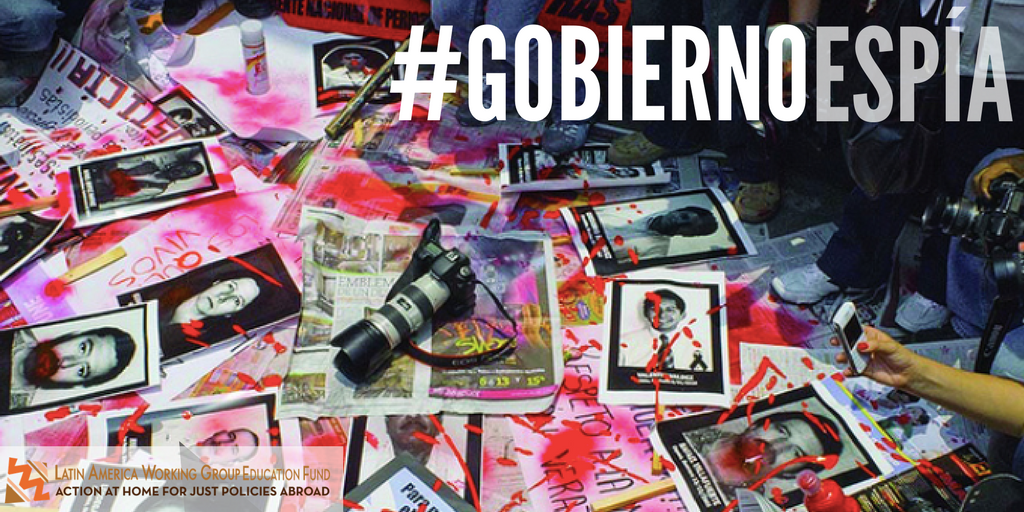 Over one month after the New York Times and two civil society reports unveiled that the Mexican government targeted journalists, anti-corruption activists, and human rights defenders with advanced spyware, Mexican authorities have met the allegations with blatant denial and unconvincing promises of fair and complete investigation. Once more, the Mexican government has failed to acknowledge the severity of attacks against activists and journalists exercising their right to freedom of expression and seeking answers about endemic organized crime-linked violence.

With over 90 murders of journalists since 1992, and six this year so far, Mexico now ranks alongside Iraq as the most murderous country for journalists worldwide in 2017. Article 19, a Mexican NGO, places the tally at 106 journalists killed since 2000, 33 of them since Enrique Peña Nieto assumed the Mexican presidency in 2012. Of those killed since 1992, 85 percent covered organized crime, corruption, or politics. Attacks against human rights defenders are also rampant, including against family members demanding justice for their disappeared relatives. Most recently, Miriam Rodríguez, an activist whose daughter disappeared in 2012, was shot to death this past May in the state of Tamaulipas on Mexico’s Mother’s Day.

These attacks –– combined with skyrocketing homicide rates, widespread collusion between local (and even federal) government, police, and organized crime, and a judicial infrastructure crippled by a lack of rule of law –– point to a clear pattern of Mexico’s failure to address impunity, strengthen institutions, and effectively investigate human rights violations.

Over the course of the past month, renowned journalist Carmen Aristegui, anti-corruption activist Juan E. Pardinas, human rights lawyers Santiago Aguirre and Stephanie E. Brewer (a U.S. citizen), and others have testified to receiving insidious text messages designed to surveil their activities and infiltrate their cellular data –– including emails, texts, calls, and contacts. The lures contained personalized fake news alerts about rights abuses and investigations designed to engage their recipient and even impersonated the U.S. Embassy in Mexico. The revelations come after years of ineptitude on the part of the Mexican government to protect journalists and rights defenders from attacks and bring perpetrators of abuse to justice.

Since the news broke, Mexican authorities have repeatedly denied the disclosures, while offering weak promises to investigate the allegations. The first official response came on June 19 in the form of a tweet by a Mexican government spokesperson: “There is no evidence that Mexican government agencies are responsible for the supposed espionage as described in the [New York Times] article.”

Later, on June 22, President Peña Nieto admitted that his government purchased the spyware, but denied having used it against activists and journalists. “None of the people who feel aggrieved can affirm, demonstrate or show evidence that their life has been affected by these supposed interventions and this alleged espionage,” the president said.

However, the spyware employed in the attacks is sold exclusively to governments. Since 2011, at least three Mexican federal agencies –– the defense ministry, attorney general’s office, and intelligence agency –– have purchased $80 million worth of “Pegasus” spyware from an Israeli cyberarms company on the condition that it be used solely for counter-terrorism and counter-narcotics operations. As the known purchaser of this software, the Mexican government has the obligation to ensure that such technology is used only for its intended purpose, to investigate any allegations of its misuse, and to protect the rights to privacy and freedom of expression of all its citizens.

After activists submitted a formal complaint, on June 21 the Mexican attorney general’s office announced it was opening a criminal investigation to determine whether the spyware had been used against the country’s reporters, rights defenders, and anti-corruption activists. The inquiry will be conducted by a special office that prosecutes crimes against freedom of expression (La Fiscalía Especial para la Atención de Delitos Comeditos contra la Libertad de Expresión––FEADLE). Mexican journalists and rights groups have voiced concern that the government’s investigation is unlikely to be complete and independent, given that FEADLE is overseen by the attorney general’s office––one of the bodies accused of deploying the software against them.

Meanwhile, Mexico’s national human rights commission (Comisión Nacional de Derechos Humanos––CNDH) issued a non-binding, public recommendation requesting that government and security agencies abstain from using the software against civil society organizations, and that the attorney general “carry out a professional, exhaustive, objective, and diligent investigation of the facts.” On June 26, the attorney general announced that his office would request help from the U.S. Federal Bureau of Investigation (FBI) to probe the spying allegations. However, as of July 6, the FBI had yet to receive a formal request from the Mexican government for assistance on the inquiry, according to the U.S. Embassy in Mexico.

“The central issue that plagues Mexico on so many different fronts… [is] impunity,” said Azam Ahmed, the New York Times Bureau Chief for Mexico, Central America and the Caribbean who broke the spyware case last month. Speaking at an event co-hosted by the Washington Office on Latin America (WOLA) and the Wilson Center in Washington DC, he stated, “You kill a journalist, the chances are, you’re not going to get caught. You’re not going to be prosecuted or pursued. There’s probably not even going to be a real investigation.” Empty case files and flawed inquiries are the rule of the game for perpetrators.

The event highlighted impunity as one of Mexico’s most critical challenges. Out of more than 800 cases of harassment, assault, or homicide against Mexican journalists since 2011, only two suspects have been convicted.

The Pegasus espionage speaks to the lengths the Mexican government is willing to take to silence the work of human rights defenders, journalists, and anti-corruption activists, and to frustrate attempts at fair and complete investigation, which Mexican authorities themselves have failed to conduct on their own accord, into the country’s gravest human rights abuses. Even the Interdisciplinary Group of Independent Experts (GIEI by its acronym in Spanish), tasked with investigating the facts of the September 2014 Ayotzinapa disappearances, was targeted by Pegasus spyware, lending proof to the Mexican government’s continued refusal to cooperate in resolving endemic rights violations and commitment to extinguishing outside inquiries.

The Mexican government’s spying on activists and media workers is reminiscent of sweeping espionage conducted by Colombia’s intelligence agency (DAS) in 2004-2008, documented by the Latin America Working Group (LAWG), WOLA, the Center for International Policy, and the U.S. Office on Colombia in 2010. Instead of spying on human rights defenders and journalists, governments should be seeking to protect them.

One month should evidence more progress on the spyware case than what the Mexican government has demonstrated. LAWG joins Mexican and international civil society organizations, members of the Inter-American Commission on Human Rights (IACHR), and the United Nations Office of the High Commissioner for Human Rights in calling for an independent panel of international experts to conduct a serious and credible investigation of the spyware attacks in Mexico. We urge the Mexican government to cooperate with the investigation proceedings, including making public any documents or contracts related to the software’s purchase and use. The United States government should raise with Mexican authorities the need for progress on the investigation and condemn this attack and others against human rights defenders and journalists.