Here’s an update on the recent natural disasters that have hit Guatemala from Kelsey Alford-Jones of the Guatemala Human Rights Commission/USA (GHRC/USA):

A week after Guatemalans experienced a dual assault from Pacaya Volcano and Tropical Storm Agatha, volcanic ash still hangs in the air. Over 80,000 people wait in emergency shelters—the homes, crops and livelihoods of many completely destroyed. 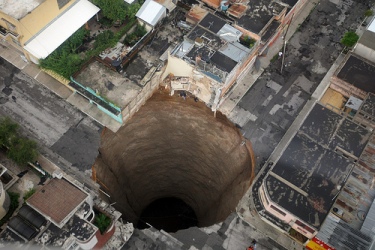 Pacaya Volcano, located south of Guatemala City, complicated the situation, spewing millions of cubic meters of volcanic ash during an eruption on May 27, which covered the capital and caused the airport to close.

Though analysis of damages change daily, it is estimated that over 150 people have been killed, 100 missing, and 150,000 displaced. Thousands of buildings have been destroyed and millions of hectares of cropland affected, including staple crops such as corn, beans, coffee, tomato, and potato. Many are suffering from respiratory infections, diarrhea and other diseases. With the collapse of sixty-five water systems, there are likely to be increased sanitation problems.

Perhaps the most dramatic image of the storm has been the sinkhole that opened up in Guatemala City, a gaping 30-meter wide and 60-meter deep depression that swallowed an entire intersection and a three-story clothing factory.  Luckily, the factory closed the hour before and no one was in the building. But neighbors continue to worry that their homes are also at risk. The sinkhole was most likely caused by a combination of rising underground water tables, poor sewage systems, and erosive volcanic dust carried by the water.

By June 2, the majority of affected communities on the Pacific Coast were no longer flooded, but 5,093 people remained in shelters. This number has been diminishing, however, as people grow frustrated with the poor conditions and limited aid. Electricity has now been restored and classes resumed June 7. Though recovery efforts have begun on main roads and bridges, many communities remain isolated.

Guatemala has requested international aid and USAID provided $100,000 for the purchase of emergency relief supplies. UN organizations have gathered at least $800,000 in emergency resources. Meanwhile, President Colom has requested TPS for Guatemalans in the U.S. , which would halt deportations and allow thousands to remain in the U.S. and obtain a work permit. The U.S. has yet to respond to this request.

Although Guatemala was the worst hit, thousands in El Salvador and Honduras were also affected by Tropical Storm Agatha.