How Can the United States Help Colombia Achieve Peace? A How-To from the Latin America Working Group

The Colombian government and Revolutionary Armed Forces of Colombia (FARC) guerrillas are advancing steadily in negotiations in a peace process that could bring an end to 50 years of brutal conflict. They have already reached agreement on three of six “chapters” of a final accord, on rural development, political participation, and drug policy, and are now advancing in discussions on the victims’ rights chapter.

The governments of Norway and Cuba are acting as “guarantors” of the peace process, with Venezuela and Chile playing supportive roles. While the United States government is not playing an official role in sponsoring the peace talks, the United States can play a vitally important role in supporting the negotiations now and in supporting peace accord implementation in the critical years to come. 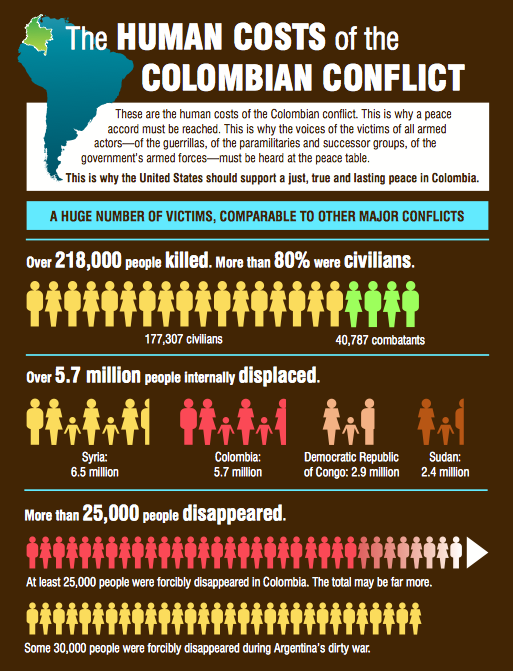 To that end, the Latin America Working Group Education Fund just released a series of recommendations on how the United States can help support the peace process (in English, en español).

President Obama, in an October 8th phone call with Colombian President Juan Manuel Santos, “underscored continued strong U.S. support for the work done so far by the Colombian government to bring an end to the longest running conflict in the Americas and expressed U.S. readiness to work closely with Colombia during the post-conflict period.” That’s an encouraging pledge.
There are many additional ways the United States can help support a just and lasting peace. That starts with standing with the victims of violence by all armed actors as they call for truth, justice, meaningful reparations and guarantees that the brutal past will not be repeated.

And declassifying U.S. documents for a potential Truth Commission.

And transforming U.S. assistance to support a sustainable peace, rather than war—using that aid carefully to back peace accord implementation, land mine removal, land restitution, truth, and support for the victims of violence.

Over 220,000 people have been killed in this conflict, 81 percent of them civilians.  More than 6 million people have been internally displaced. (See this infographic on the human toll of the war.) As one Colombian indigenous leader recently said, echoing a sentiment held by many, “We have never lived a single day of peace…. We want to leave to our children the possibility of living in a country at peace.”

The United States has invested 9 billion dollars in Colombia, mainly directed at this brutal war.  Now is the time to invest in peace. Here’s how.