“If you go this year you will find another Cuba”

Dr. Reinerio Arce, President of the Evangelical Theological Seminary of Matanzas, Cuba,  participated in a briefing at Washington, DC’s National Council of Churches last week regarding the current  reality of religious life and the role of churches  in Cuba. Dr. Arce’s presentation focused on the current economic and social changes occurring on the island and how they have affected various faiths and churches. He also expressed deep support for small, but important measures taken by the Obama Administration in regards to religious travel–which he claims has greatly facilitated his seminary’s ability to carry out social projects. Dr. Arce began by stressing the importance of the relationships between U.S. and Cuban churches: 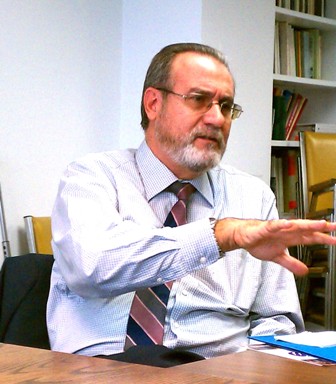 “The churches are the bridges between our people; [after] all these years of confrontation between our countries, the churches have maintained a strong relationship between the people. To have changes in the U.S. government’s policy towards Cuba, we are very grateful for that.”

“The flexibility in the [travel] license has been very important to the ecumenical community. Many of our churches, the Presbyterian, Episcopal, the Baptist and the Methodist Churches, they were part of the church in the United States, so seniors [pastors] that had retired have their pensions there [in the U.S.]. There was a freeze and the [U.S. churches were not able to] send them their pensions.

“Last January the Treasury Department gave permission to send the money [to the pastors] that was in the account of the pensioners in Cuba. This was a very important step. These individuals had been in terrible economic situations and they had the right to receive their pensions. So we don’t have the money yet in Cuba but we expect it will be there soon. It will go directly to the personal accounts of the pensioners.”

“We are living in a very interesting moment in Cuba–with a lot of changes, challenging changes in economics.  There have been major changes in the ability to run small, private businesses. For those of you who visited last year, if you go this year you will find another Cuba. Everything is moving in the economy–especially in the private sector. We have all kinds of business. And there’s no way we can turn back. These changes have been too significant to reverse; they are going to be permanent.”

“The social aspect is very complicated. [With] the [opening up] of the private sector, the government has withdrawn from many of the subsidized [industries] to make room for the private businesses. Now, many people are [becoming] unemployed because [government jobs] are going to this private sector. It has been a great challenge in Cuban society–especially for the churches because many [Cubans] do not know how to rearrange their work [to be in the private sector]. Many of them are coming to the church to ask for help, which is a big challenge for all of the churches in Cuba.

“We are planning right now in the seminary to begin a special course, a program that the Martin Luther King Jr. Memorial Center (in Marianao, Havana) and the seminary will be doing that together, focusing on business administration and those kinds of things. The Catholic Church is already working on that. In our case the seminary and the MLK Center will begin when we have enough finances to accomplish the program. It’s a necessity and people are coming to the church to ask for that. There is consensus between the MLK Center and the seminary not to promote small, private business but instead cooperatives. We think it is more within the Christian understanding of economy.”

“In the religious [realm] in Cuba there have been many changes: more openness on the side of the government, especially in relation to the Catholic Church in the last two years. The Catholic Church had a very active role in the releasing of political prisoners, which was supported by the mainline Protestant churches and also the celebration of the 400th anniversary of the Virgin of Cobre, the patron saint of charity and of Cuba. A [nearly month-long] pilgrimage of the statue took place all over Cuba, to Havana in hospitals and prisons and other public places. This was totally, totally new in Cuba.“

“Work is suspended in Havana on Wednesday so that people can go to the [Pope’s] event. That is really something. It is something interesting and symbolic, we don’t know what that means yet, but it is a big step. I think it is a good thing for Cuba, and for the Cuban people. It will open Cuba to the rest of the world and more changes will come after that. We are living in a very global moment, a very challenging moment. In relations with the States, I think one of the important things for us is that our relationship with the churches in the United States is very good.”