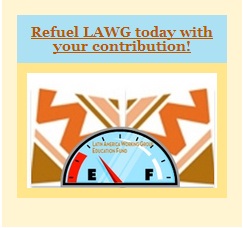 I’m ecstatic about our past six months! Together we’ve proven that much can be accomplished.

In under two months, you and 4,400 other LAWGistas signed a petition delivered to the White House asking for victims’ participation in the Colombian peace process, the creation of a truth commission, and the reshaping of U.S. aid to promote peace, not war.

You and over 9,000 others have made it clear that Cuba shouldn’t be on the State Department’s list of state sponsors of terrorism, or as we refer to it, the “Terrorist List.” If you apply the criteria described by former Secretary of State Condoleezza Rice in taking North Korea off the list in 2008—no support for terrorism in the last twenty years – the removal of Cuba from this list is long overdue! Can you believe our government places Cuba in the same category with Iran, Syria, and Sudan?

Will you consider donating $25 to fund similar petitions that place our out dated policies on national display?

We are also pushing hard for justice in Honduras. 149 civilians have been killed by the Honduras police in the past two years alone. We need to ensure that no U.S. aid is used to support the police implicated in these killings and other human rights violations. And as the debate on comprehensive immigration reform heats up in the Senate this week we are committed to making sure the amendment that would limit dangerous deportation practices, such as those occurring at night when shelters are closed, or deported to dangerous cities in northern Mexico, remains in the final bill. After all, migrants have human rights and deserve to be treated with dignity and respect.

Donate $25 or more this summer to help us organize impactful campaigns like End the Travel Ban on Cuba, Stand by Colombia’s Victims of Violence, and Promote Justice for Mexico and the Borderlands.

Remember, anything helps when you are organizing for human rights. Thank you for being part of our dedicated community of activists!

P.s. I am proud to be an advocate for just U.S. foreign policy that promotes human rights, peace, justice, and sustainable development throughout Latin America. Show off your pride with this canvas, union-made LAWG tote when you donate $100 or more! Already have one? Give one to a friend!