Do you hear that? That is the clamor for a new drug policy coming from Latin America and the Caribbean. It’s Latin Americans from all walks of life—current and former presidents, caravans from the Mexican Movement for Peace with Justice and Dignity, civil society leaders from across the continent—calling for a renewed approach to drug policy that moves away from the tired, heavy-handed enforcement strategy that has devastated the lives of so many. Yet, Washington lawmakers aren’t listening. It’s Time to Listen!

As pressure mounts for alternatives to a militarized approach, today LAWG and our colleagues from the Washington Office on Latin America (WOLA) and Center for International Policy (CIP) release Time to Listen: Trends in U.S. Security Assistance to Latin America and the Caribbean, a new report that dissects the current trends in the U.S. security relationship with Latin America. 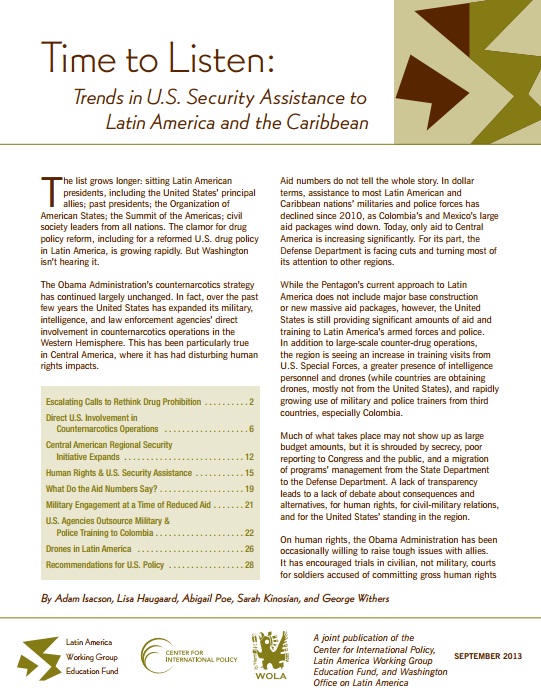 In this day and age of budget cuts, the U.S. is now moving away from big-ticket aid packages, such as Plan Colombia. What are we seeing in its place? Still substantial military programs with secrecy and a lack of transparency. U.S. military and police aid to the region is declining, with the exception of Central America, which is now a focus of the failed war on drugs. The decrease in military and police aid to Latin America, however, is deceptive. The region is experiencing an increase in training by U.S. Special Forces, direct U.S. involvement in counternarcotics operations in Central America, and the rapidly growing use of military and police trainers from third countries, mostly Colombia.

Click here to purchase your copy of Time to Listen!

What does all this mean for human rights? The Obama Administration is sometimes willing to raise human rights issues with allies, such as pushing for civilian trials for military human rights abuses in Mexico and Colombia, and visibly supporting the trial of Rios Montt in Guatemala. But too often the administration downplays abuses by allied security forces. U.S. promotion of a greater role for Colombian security forces training other nations’ forces is deeply disturbing, given that the Colombians have yet to ensure accountability for grave human rights abuses. U.S. involvement in heavy-handed, botched counternarcotics operations in Central America has resulted in the deaths of civilians. And the Obama Administration’s failure to shutter Guantanamo and its use of drones for extrajudicial killing undercuts the United States’ ability to stand for human rights elsewhere.

We take pride, and often brag, of the fact that we have such active, knowledgeable, and thoughtful supporters. We’re grateful that you take the time to participate in our different advocacy actions and, to keep you informed, we’re sharing our latest analysis that serves as a foundation for these organizing efforts.

Thanks for your order, your interest, and your activism for a just U.S. policy towards Latin America.