Justice for Berta: Still out of Reach

The murder of prominent indigenous and environmental rights defender Berta Cáceres in March 2016 sent shockwaves across Honduras and the world. Though far from an isolated incident, her assassination sparked a worldwide reaction. The national and international outrage regarding the murder of this beloved activist helped move this emblematic case forward. Yet, Berta’s family and the organization she founded, the Council of Popular and Indigenous Organizations of Honduras (COPINH), are facing a whole new set of challenges to achieving real justice.

The trial has been moving ahead relatively quickly despite the complex nature of the case, which is, perhaps counterintuitively, problematic. In fact, Berta’s family, COPINH, and observers are concerned that the Honduran government is attempting to swiftly plow through it to avoid catching the intellectual authors. 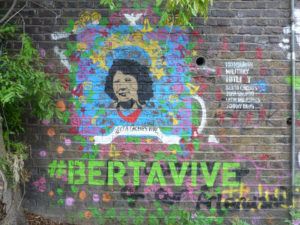 By the time the first preliminary hearing on the case took place in June 2017, COPINH and Berta’s family had already denounced numerous irregularities in the investigation and legal process and that their rights as victims for access to evidence and to the trial were being denied. To this day, the trial court has yet to properly address these concerns and continues to demonstrate a strong bias against Berta’s family and COPINH.

Bias against the victims.

On October 19, the court restarted the trial and decided to withdraw the victims’ legal representation from the judicial process, leaving the Public Prosecutor as the sole representative of the victims. The start of the trial had been suspended since September when Berta’s legal team accused the three judges of bias and abuse of authority and petitioned they be recused and replaced.

The Public Prosecutor has failed to provide the court and Berta’s legal team access to all information pertaining to the case, and the trial court has ignored its responsibility to ensure the delivery and analysis of the withheld information. According to COPINH, the Public Prosecutor has denied them information regarding the case on 35 occasions. Most of the concealed information—which includes evidence found in phones, USBs, and other devices, as well as ballistic and financial analysis reports—is crucial to investigating and prosecuting the intellectual authors of the murder, as well as uncovering their broader plot against Berta and COPINH.

The court has also impeded the thorough investigation into the business networks behind the Desarrollos Energéticos S.A. (DESA) Agua Zarca dam project. Most notably, the court rejected last month COPINH’s request for testimonies from members of the Atala Zablah family business group. The Atala Zablah group began injecting millions of dollars into DESA in 2011 after the latter surprisingly won the concession to build Agua Zarca (even though it only had about $1,200 in equity at the time).

The trial court also denied the victims’ request to publicly transmit the hearings. This decision has drawn criticism from international NGOs as it prevents Honduran society and the international community from accessing the court proceedings.

In addition, members of COPINH have been discriminated against by Supreme Court officials in and outside the court.

From the very beginning, COPINH and Berta’s family have insisted that Berta’s murder was not an isolated crime carried out by individual interests, but rather part of a broader systematic attack against COPINH and the country’s indigenous communities. If successful, the case has the potential to lay bare the country’s rampant corruption and impunity.

Berta’s family and COPINH are asking the international community to denounce the Honduran government’s careless handling of the case and demand it address the irregularities in the ongoing judicial process. The trial should be conducted taking into account all evidence and strive to identify and bring to justice the intellectual—not just the material—authors of the murder.

This case is about justice, not just for Berta’s cruel murder, but for the Honduran people—especially those who continue to be threatened and killed for standing up for their community’s rights.