Justice in Mexico: “We continue living; we have to fight.”

For nine years Valentina Rosendo Cantú has been seeking justice for human rights violations committed against her by the Mexican military. In 2002, Valentina was raped by Mexican soldiers while washing clothes in a stream running through the indigenous community of Me’phaa in Guerrero state. In 2010, Valentina’s case reached the Inter-American court of Human Rights where the court issued a sentence mandating Mexico to make reparations for Valentina and re-open the criminal investigations in civilian courts. Mexico has yet to fulfill its obligation so Valentina continues to fight.

On February 3rd, 2011, Valentina came to the Washington Office on Latin America (WOLA) to share her story in an event titled “Nine Years of Struggle: Valentina Rosendo’s efforts to bring justice for the human rights violations committed against her.” The event was sponsored by WOLA, The Center for Justice and International Law (CEJIL), the Tlachinollan Human Rights Center of the Montaña, and the Robert F. Kennedy Center for Justice & Human Rights. Here is her testimony:

“On February 16th, 2002, I was raped by military soldiers and since then I haven’t received justice. My country’s government has not listened to me.

“[After the rape] my husband came with me to the general hospital in Ayutla. The doctor didn’t examine me thoroughly. They didn’t perform any other tests even though I told them I was raped by military soldiers.

“When we filed the report the following day, accompanied by the state human rights commission and my husband, there was a lawyer who said, ‘I don’t believe this happened to you. How do you know they were soldiers?’ I said they were soldiers carrying weapons, wearing uniforms and everything. She didn’t believe me and she made fun of me for the way I spoke. I had hoped to do nothing more than file my report there. I never thought it would be delayed so many years.”

“After I filed my complaint I returned to my community and the week later a lot of military entered my community. They demanded that I take back my words that the rapists were from the military. Many more entered my house and my community, and frightened people. The community told me ‘You will have to leave because we can’t live like this.’ For this reason I had to leave and also because I was discriminated against by part of the community that told me a woman who has been raped is not worth anything.”

“At 17 years old, I left and I arrived in the city of Chilpancingo, Guerrero that for me was a very large city where they don’t speak Me’phaa, my language. I had to fight to not die of hunger with my child while continuing with my struggle for justice. I arrived there and I worked in a home as a domestic worker because after everything, my husband had left me.

“The government never gave me any hope I could continue fighting. The only thing the government did was threaten me. The government also threatened the people from the human rights organization who had helped me. They killed two men from the organization because when they were in my village they made women’s voices like mine heard.

“This is what happens in the indigenous community when a woman reports what has happened to her. After what happened to me, many women told me they were raped. Many things happen to us but out of shame I know there are women who decide not to report anything. It is not that they don’t want to, but because they suffer consequences for speaking up.

“People ask me, ‘Why do you continue fighting? Even after you have lost so many things, your family and your husband and the community you grew up in?’ I always tell them, ‘I know it’s not easy but I have to do it because if I don’t, there isn’t another way if we remain silent. Many things happen to us and we don’t raise our voice.’ And for this reason I am here right now.”

“It is easy to say eight years, but in this time many things have happened to me including hunger and discrimination. ‘Look there, there’s the woman who was raped,’ people say. But I continue fighting. I do it for my daughter and myself and for the many women who have been raped. I know it is difficult to break the chain of injustice happening in my community and in my country, but I continue fighting.”

“Right now I have hope that one day justice will come… that the soldiers are put in jail. That is what we want. We want our case to pass through civil jurisdiction because now our case is in military jurisdiction. We want to pressure the Mexican government to do this. For this reason I came here to receive a little support. With this support I could tell the Mexican government to agree to these terms because not only has the truth come out [about the abuses], but the truth that the government never does justice has come out too.

“We continue living; we have to fight. I know one day a light of hope will come for us and for many women.” 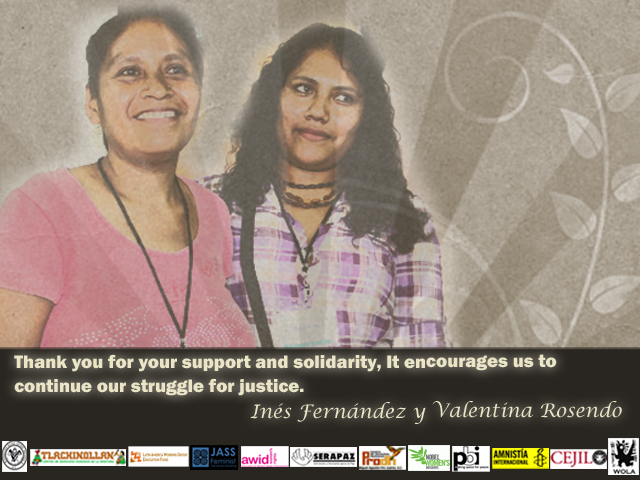