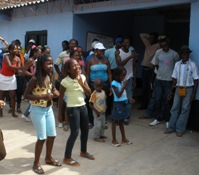 Stop the eviction of this
incredible community!If the Colombian government does not change its mind, tomorrow the 1052 families that make up the Afro-Colombian community La Toma will be evicted from the land that they have lived on for almost 400 years. We cannot let this happen.


Take action now to support the community and stop the eviction!

Members of the Afro-Colombian Community of La Toma have been living on the resource rich, mountainous lands of northern Cauca, Colombia since they escaped the enslavement that brought them to Colombia in 1636. Over the centuries, they have developed a culture and history that is tied to this land, carving out an environmentally sustainable living through artisanal gold mining and basic agricultural projects, and grounding their traditions in this ancestral place.

As a result of this brave, non-violent commitment to stay in their homeland, the community has now suffered a rising number of death threats and assassinations by paramilitary groups that favor the displacement of local residents from the areas where there are gold mines. After a ruling from the Inter-American Commission on Human Rights, in December 2009, the Colombian government made an agreement with Afro-Colombian leaders promising to protect communities from this targeted violence and review the illegally granted permits.   But they haven’t made good on these promises, with killings of miners on the rise in the past couple months, and now the government’s decision to evict the community tomorrow.

Will you ask the U.S. State Department to urge the Colombian government to halt the eviction? Just click here to send a message!

If the U.S. government speaks out strongly enough against this eviction, we can stop it from happening. Our partners the Washington Office on Latin America (WOLA) and the U.S. Network in Solidarity with Afro-Colombian Grassroots Communities (NASGACC) have been working for months to make sure our government puts on the pressure. But with one day left, they need a cacophony of voices to make them take that final step.

So please add your voice to the call for respect for the people of La Toma.

In January, I visited La Toma and I can tell you first hand that its community members are some of the strongest people I have ever met and their culture is truly one of a kind. Displacing them from their lands is not only a violation of their territorial and human rights, but also an act that would lead to their impoverishment and devastation of their traditional culture.

Thank you for joining me in standing with this brave community today.