Land Restitution in Colombia: It Takes a Minute to Displace, and a Minute to Kill, But Years to Return the Land

Claudia Liliana Erazo:
While we recognize the importance of the Victims and Land Restitution Law 1448 and what it meant for displacement victims to finally have a legal mechanism to protect their land rights, three years after going into effect, its implementation is very deficient. There are more than 70,000 applications for land restitution, and only 10 percent have been effectively registered. This means that 70,000 families have tried to use the system but only 7,000 of them have been able to register, and begin the restitution process. The law set a period of 10 years to return more than 300,000 families and three million hectares. If it continues at this pace, 10 years will not suffice. The law has not even completed 1 percent of its objective.

What are the obstacles to land restitution? There have been more than 50 years of armed conflict, 20 years of land grabs, and 8 million hectares that have been stolen from more than 4 million peasants who have been displaced. This is a phenomenon that began in the 1980s but that the state only began addressing in the 1990s. A family that had their land stolen in 1990 very possibly moved to another place where the armed conflict came and thus were forced to resettle elsewhere again. A family could have been victim of displacement and land grabs every 10 months. A property once abandoned in the 1990s could have been occupied by another peasant family that was also forcefully displaced in 2000, and then again in 2005. This means that many families could have been victims of violence and land grabs on the same property. 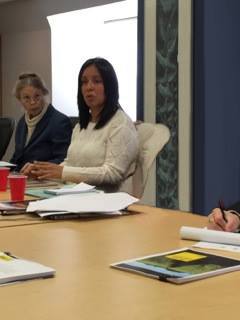 At the beginning of the armed conflict, Colombia was a predominantly rural country, with very informal tenure over the land. Peasant families would arrive to uninhabited areas and occupy those unoccupied lands, and might have lived there without having a legal property title. This informality and absence of institutional and state presence to solve this problem has made it difficult to identify the property and the legitimate families that claim those lands. Of course, this irregularity that facilitated land grabs also made it easier for those who do know the law and can make use of legal mechanisms to get hold of those lands. That is why many of them are legalized at the hands of proxies, businesses, and those behind the people who benefited from those land grabs. That is the challenge of this program: being able to solve the problem of identifying lands is hard enough, without having to then face the large companies that might have appropriated these territories that later resist giving back those lands.

In 2013 and 2014, there have been increases in attacks and threats to human rights organizations, victims, and land claimants. The organization Somos Defensores – (We Are Defenders) published a report called La Divina Comedia – (The Divine Comedy) which reveals that in 2014 there were four times as many aggressions to human rights defenders compared to 2010. 2014 registered 55 murders, 488 threats, among more than 623 aggressions against human rights defenders. The threats were mostly against land claimants and organizations that work to defend victims of displacement. Of these 623 aggressions, 73 percent were attributed to paramilitaries, many with ties to the companies that appropriated these lands. These are the most interested in impeding this restitution process.

More than 50 percent of applications for land restitutions are not being even processed because according to the Defense Ministry, these are in unsafe areas, and thus restitution processes cannot take place there. When the Defense Ministry says that this can’t be done because of security reasons, I think that anywhere in the world this would mean that the government should redouble efforts to guarantee the safety of these areas, but this is not the case here. A great number of applications for these zones stay in ‘stand-by’ status. By having a solely security and militaristic focus, the Defense Ministry is ignoring the right to reparations to more than 55 percent of the claimants. A right that gets denied to more than half of a given population, ultimately, is not a right. The right to reparations and restitutions is being denied as established by international principles.

Another problem is the red tape during the restitution processes. Of the 70,000 applicant families, 45,000 are left out given that they are outside the geographic areas being considered. This gives us a total of 25,000 applications that are currently in process, but only 7,000 of those are effectively registered. There are more than 14,000 applications in process that need mapping, authorization, revision, all of which are making this process longer than it should be. However, the 7,000 that are effectively registered should go immediately to restitution judges. Around 6,000 cases are in the hands of restitution judges, but only 700 sentences have been issued. The law says that these sentences have to be carried out in 4 months, but there are processes that began in 2012 that to this day, have no sentence. This delay happens because the judges are repeating all stages of testing that were already carried out: document collection, interviews of the victims, and all the information required to establish which lands belong to which family. Restitution judges recognize that the enforcement of sentences and orders have been very precarious. I think the judges have made an effort to issue sentences that recognize the right to reparations in an integral manner, but they are faced with agencies and institutions that don’t comply with those orders.

Edilia Mendoza Roa:
More than half of the world’s population are peasants. Likewise, in Colombia, we are a population where 52 percent are women, but we are also half of the population of the Colombian countryside. The right to water, land, and life are fundamental rights. Without those, we are not part of the countryside. That is the reason we need to fight for our rights. In Colombia, we have fought for more than 40 years for access to land and for legal land titles.

In the attempt to regain our lands, women assume leadership, and thus we have personally suffered what it means to achieve reparations and to return to the countryside. We are more than 6 million displaced, of which 70 percent come from the countryside and 48 percent are women. When they displace us, only men are counted, but women and children in this regard have no rights, despite being the main victims of displacement. There are many laws concerning women in this regard, such as the Law 731, also known as the 2012 law of rural women, which to this day has not been regulated nor invested in, just like the Law 1448 and 1257, which is the one about violence against women.

Every year they ask me what is the balance reached in delivering lands and reparations for victims, and every year we have to say that it takes 1 minute to return to a population, 1 minute to kill, and 1 minute to displace, but it takes 30 years to return 10 million hectares of land grabs in Colombia. Because of our condition as women, peasants, and displaced victims, there are no specific priorities for us. The murders have been continual, while an ex-president has 350 escorts, and three levels of security, but there can’t be protection for a land claimant, be that a man or a woman. We ask for investment, rights, and equity.

In Colombia, the right of access to land is only given to male peasants, but never directly to the whole family. What we have a right to is to acquire debts. Thus, the laws are open to interpretation: for some yes, but not for others.

We want to leave the message that we need support for a campaign for the direct access to lands for rural women in Colombia. We are asking for 50 percent of access to lands, as well as flexibility, an end to red tape, and a debt-relief rescue fund for rural women. We also want to highlight the need for the Law 731 to be enforced in Colombia, particularly its articles 24, 25, 26, and 27, which are directly related to the way women have access to land under different conditions. We will be working for an integral public policy for rural women. We need our fundamental rights to be fulfilled equally for us to have direct access to those rights.