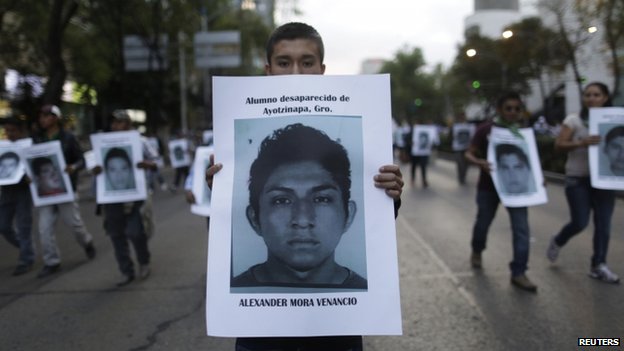 On March 1st, 2015, the Interdisciplinary Group of Independent Experts designated by the Inter-American Commission on Human Rights (IACHR) will make its first visit to Mexico to investigate the case of the disappearance of the 43 students from the rural teacher’s college of Ayotzinapa (Escuela Normal Rural Raúl Isidro Burgos) that took place in Iguala, Guerrero on September 26 and 27 of 2014. The Group, whose members were selected by the IACHR in January, will be operating under a mandate which includes “the development of search plans to find disappeared persons while alive; technical analysis of the lines of investigation to determine criminal responsibilities; and technical analysis of the Comprehensive Plan for Attention to the Victims (Plan de Atención Integral a las Víctimas) of the events of September 26 and 27, 2014.”

This visit takes place just weeks after Mexico’s Attorney General Murillo Karam announced that the Mexican government was closing the investigation into the disappearance of the 43 students. Given the profound shortcomings of the Mexican authorities’ investigation into the disappearance of the 43 students, this announcement came as a surprise to the people of Mexico and the broader international community interested in ensuring that the investigations were serious, respectful of the suffering and expectations of justice of the students’ families, and above all, free of political influence.

LAWG and human rights partner organizations including Amnesty International, Center for Justice and International Law (CEJIL), Due Process of Law Foundation (DPLF), Robert F. Kennedy Human Rights, and Washington Office on Latin America (WOLA) sent a letter welcoming the start of work by the Interdisciplinary Group. The signatory organizations agree that the gravity of the crimes and gross human rights violations committed against the Ayotzinapa students demand thorough international scrutiny of the actions of federal, state, and local authorities in the country. They believe that the Interdisciplinary Group should be given the resources and personnel necessary to fulfill its mandate and issue its conclusions with full autonomy and based on a technical framework. They further urge the government of Mexico to publicly commit to comply with the recommendations and conclusions issued by the Interdisciplinary Group.