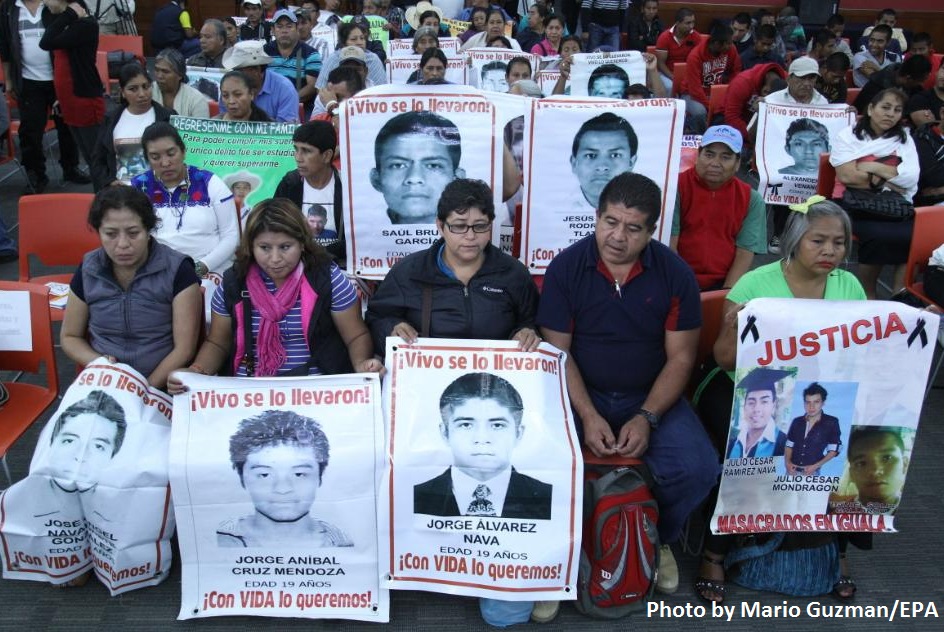 The Latin America Working Group commends the Mexican government’s interest in calling for a six-month extension to the mandate of the Interdisciplinary Group of Independent Experts (Grupo Interdisciplinario de Expertos Independientes, GIEI) and calls on them to work with the Group immediately to clarify recent developments and discrepancies in the investigation of the Ayotzinapa case. The GIEI was appointed by the Inter-American Commission of Human Rights (IACHR) to further investigate the disappearance of the 43 students from the Ayotzinapa rural teacher’s college and provide support to the Mexican government and victims of the case. It began its work in November 2014 and has since released five reports, including its final report on September 6, 2015.

Exactly a week before the one-year anniversary of the disappearance of the 43 students, little progress has been made in bringing truth and justice to the families of the students and to pursue actions to hold those responsible accountable for their crimes. A total of 180 direct victims and at least 700 relatives have been recognized as victims from the events of September 2014. Over one hundred people have been detained by the Attorney General’s Office in relation with the Ayotzinapa case for various crimes but of these, the Group of Experts has reported that at least eighty individuals stated having been tortured, received negligent treatment or abuse by security agents in their detention process.

Moreover, declarations by the Mexican government last week have failed to respond to the discrepancies raised by the Group of Experts’ final report and raised further inconsistencies in the identification of the remains of the students. In a press conference held last Thursday, September 17th, the Mexican Attorney General, Arely Gómez, announced a match between one of the 17 remains analyzed by the Austrian laboratory and the DNA of the mother of one of the 43 disappeared students, Jhosivani Guerrero de la Cruz. According to the official government version, the remains were found in bags by Mexican forensic experts in the San Juan River and had been dumped there by members of the Guerreros Unidos organized crime cartel after incinerating the students in the waste dump of Cocula.

The Argentine Forensic Anthropology Team, the independent group accompanying the families of the disappeared students, released a statement last Friday recognizing the quality of work executed by the Austrian laboratory, including the clear match of one of the remains with the DNA of the student, Alexander Mora Venancio in December 2014. However, the Argentine experts also specified that the likely matching of Jhosivani’s DNA cannot be considered a definitive result as the government claims, due to a series of factors including the fact that various additional remains not pertaining to the students were found at the crime scene of Cocula. Additionally, the experts stated as they had in earlier statements, their inability to confirm the origin of the bags of remains found in the San Juan River as only government experts were present in their initial excavation.

Finally, the Argentine team called on the Mexican government to respect established protocols in notifying the families on developments related to the identification of the remains of the 43 disappeared students. The latest announcement from the Attorney General’s office was shared with the families only minutes before the press conference to the public. The families of the disappeared students have completely rejected the announcement of the match of one of the remains with the DNA of Jhosivani Guerrero de la Cruz.

The veracity of the Attorney General’s latest announcement has been further questioned by these groups given their inconsistencies with the findings from the Group of Experts’ final report.

The 560-page final report refutes the Mexican government’s version of the incidents and brings up new theories to be investigated.

Reactions to the Presentation of the Report

Since the press conference on September 6th presenting the public report, the Group of Experts met on September 9th with members of the Mexican Senate and Mexican Foreign Minister Claudia Ruiz Massieu. Mexican President Enrique Peña Nieto immediately offered his thanks to the Group of Experts via his Twitter account and called on Mexican government agencies to take the report’s recommendations into consideration. The Attorney General’s Office confirmed that they will carefully analyze each of the report’s recommendations, but did not address its differences with the official version. Other declarations by Mexican government agencies such as the head of the Criminal Investigations Agency continued to maintain the government’s official narrative of events and asserted that governmental investigators could not be wrong.

The report was also shared with family members of the disappeared students, community members and current students at the Ayotzinapa rural teacher’s college.

On Friday, September 11th, LAWG joined a regional group of organizations expressing full support for the final report, reiterating the need for the Mexican President to meet with the family members of the disappeared and calling for immediate implementation of the report’s recommendations. Experts from the United Nations, including the Working Group on Enforced or Involuntary Disappearances and the Special Rapporteurs on Torture and Extrajudicial Executions, have also echoed the same sentiments. The UN High Commissioner for Human Rights, Zeid Ra’ad Al Hussein, who will visit Mexico in October, also praised the report.

Expectations for the Upcoming Weeks

President Enrique Peña Nieto confirmed September 24th as the date for his meeting with the Group of Experts and the family members of the disappeared students. His only other meeting with them to date was on Oct. 29, 2014.

The family members and the Centro Derechos Humanos de la Montaña “Tlachinollan” have already announced that they will hold a fast for 43 hours beginning on September 23rd and lead a march from the Presidental residence to the central square of Mexico City on September 26th.

While no further details have been released around the specific workplan of Group of Experts for the next six months, the Mexican Congress has announced the creation of a commission tasked with following up on the recommendations of the Group’s report.

The forced disappearance of the 43 students from Ayotzinapa has become an emblematic case of not just the more than 25,000 registered cases of missing or disappeared people in Mexico, but also of collusion and corruption on the part of local, state, and federal police and security forces.

LAWG urges the Mexican government to fully support the continued work of the GIEI, work in full cooperation with the Inter-American Commission of Human Rights during its upcoming visit to Mexico and demonstrate the willingness to seek accountability and justice for such grave human rights violations. Too little progress has been made at such a late date of the investigation. Only by implementing the Group of Experts’ final report recommendations and investigating the inconsistencies to date, will the families come closer to obtaining real answers on the whereabouts of the missing students.