The Latin America Working Group Education Fund (LAWGEF) has been continuing the legacy of the “Old Man in the Sea,” Ernest Hemingway, and his research conducted in Cuba on shared maritime resources with the United States. This week a delegation including the grandsons of Ernest Hemingway, Patrick and John, will be traveling to Cuba to not only commemorate their grandfather but to promote U.S-Cuba scientific cooperation and ocean resource management that their grandfather started about eighty years ago. In 1934, Ernest Hemingway invited representatives from the Philadelphia’s National Academy of Sciences to travel on his beloved boat, the Pilar, to conduct marlin research in the Florida Straits. At that time there was no embargo on Cuba, and this type of scientific exchange could happen frequently. After 50 years of broken diplomatic relations and in a world with natural resources becoming more scarce now is the time to promote scientific exchange with our geographical neighbors rather than isolate them. Below is a piece that was published by the Philadelphia Inquirer written by two of LAWGEF’s delegation participants John Hemingway and Robert McCracken Peck, senior fellow at the Academy of Natural Sciences of Drexel University, about the importance of being part of this delegation to Cuba and what it may mean for the future of U.S-Cuba relations.

The old man and his research of the sea 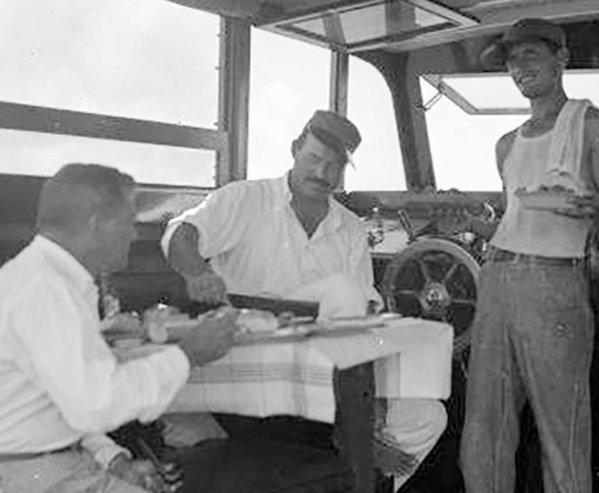 In the spring of 1934, Ernest Hemingway invited noted ichthyologist Henry Weed Fowler, of Philadelphia’s Academy of Natural Sciences, and Charles Cadwalader, the managing director of that institution, to travel to Cuba and join him on his beloved fishing boat, Pilar.

Affectionately referred to by Hemingway as the “scientificos,” their purpose was to conduct marlin research in the Florida Straits. From late July through August, as they plied the waters between Cuba and the United States, the three men fished for, observed, and discussed marlin, sailfish, tuna, and other big game fish. They continued to explore the subject through correspondence in the months and years to follow.

This little-known interest of Hemingway’s in recording and understanding the natural world, instilled in him as a boy by his physician father, Clarence, produced much new valuable information on Atlantic game fish and led to the creation of a Hemingway archive at the academy’s natural history museum.

On this, the 80th anniversary of that important collaboration, the Hemingway family and the academy are again joining forces to promote the conservation of marlin and other billfish populations in the waters between Cuba and the United States, despite the political tensions that have long existed between the two countries.
The two of us, along with another grandson, Patrick Hemingway, and Martin Arostegui of the International Game Fish Association, will be part of a U.S. delegation traveling to Cuba this week for meetings with Cuban scientists to discuss the creation of a joint U.S.-Cuba program to study a number of highly migratory fish species in the Florida Straits.

We see U.S.-Cuban scientific cooperation and ocean resource management as vitally important, and something that should be encouraged, despite the political obstacles and trade and travel restrictions that are still in place more than 50 years after the United States and Cuba broke off diplomatic relations.

At present, there are some fledgling joint scientific efforts, yet much more is needed if marine scientists from both countries are to fully understand the symbiotic relationship of the marine species in the Florida Straits, and how the larvae of many of them that spawn in the waters off Cuba travel with the Gulf Stream to South Florida, where they mature into adults. While these vulnerable species are oblivious to the political constraints that prevent us from sharing information about their migratory patterns and living conditions, all of them will indeed suffer if sound, conservation-oriented fishing policies are not established and supported by both Cuba and the United States.

Under the auspices of the Latin America Working Group Education Fund, in Washington, and Global Arts/Media, in New York, the U.S. delegation will meet with Cuban scientists to discuss how best to open channels of communication about our shared marine resources. We will also celebrate our mutual admiration for Ernest Hemingway. We will commemorate the 60th anniversary of his Nobel Prize for literature with a ceremony at his Cuban home, Finca Vigía, on the outskirts of Havana. We will also mark his Cuba legacy with a one-day sail from the Hemingway Marina, west of Havana, to the fishing village of Cojimar, which served as the locale for his award-winning novel The Old Man and the Sea. When Hemingway received his Nobel Prize, he donated the medal to the people of Cuba, noting that “my works were created and conceived in Cuba, in my village of Cojimar, of which I am a citizen.”

Today, in the waters off Cojimar, and along the South Florida coast, the marlin, tuna, and other game fish that Hemingway so loved and that helped to inspire his literary contributions are under severe pressure from overfishing, water pollution, and other environmental threats. Gathering – and sharing – baseline information about these species and their migratory behavior will be an essential first step in enabling both countries to better understand and protect these vulnerable ocean resources that are so important to our tourism and fishing economies.

Ernest Hemingway as conservationist may not be an image that readily comes to mind for most people, yet as movingly portrayed by Paul Hendrickson in Hemingway’s Boat: Everything He Loved in Life, and Lost, 1934-1961, the author was indeed passionate about exploring, observing, and understanding the natural world in order to better preserve its resources. Today, 80 years after his collaboration with the academy, it is time to revisit this important aspect of the Hemingway legacy. We hope that in so doing we can help improve ties between Cuba and the United States for the benefit of both of our peoples and the natural resources on which we both depend.