Let’s Put a Cork in Militarizing the Border: Stop Corker-Hoeven

Today, the Senate will vote on a new version of the bipartisan immigration reform bill, S 744, that will include the Corker-Hoeven amendment, a negotiated Senate deal that calls for excessive and harmful 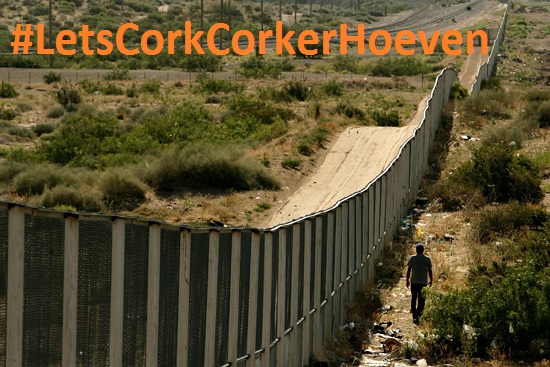 measures to militarize the border, including doubling the ranks of the border patrol, an estimated 700 miles of border fencing, and extensive investments in surveillance technology.

Coalitions representing southern and northern border communities have released a joint statement in united opposition to this Senate deal negotiated by Sen. Corker (R-TN) and Sen. Hoeven (R-ND) stating, “Our communities have endured the painful reality of unchecked and unaccountable enforcement operations, which have led to decreased civil liberties and civil rights protections, interruption of commerce and trade, constant surveillance in our neighborhoods, excessive and deadly use of force by Border Patrol agents, and the outright militarization of border communities.” Even Sen. Corker described the amendment’s provisions as “almost overkill.”

Please use this sample script when calling: “I am from (City, State) and I support comprehensive immigration reform. As a member of the human rights community (as well as a teacher/business person/medical professional/parent/student/etc), I urge the Senator to OPPOSE the Corker-Hoeven amendment, by objecting to the substitution and calling for consideration of this amendment in regular order.”

The Corker-Hoeven amendment would require the following before Registered Provisional Immigrants (RPIs) can obtain green cards:

•    More than doubling the Border Patrol with an additional 20,000 agents along the southern border (which would swell the ranks to over 38,000 agents)
•    $38 billion more in “border security” measures than in the original bill, including $4.5 billion in specific technology and equipment operationalized along the southern border, $140 million worth of Blackhawk helicopters for Border Patrol’s Air and Marine division
•    At least 700 miles of fencing completed along the border
•   Initiate removal proceedings for at least 90% of visa overstayers

No question, this is bad policy. For more information on how the Corker-Hoeven Amendment would harm the border and immigrant families, click here.

Rather than being considered as a separate amendment to the bill, the Corker-Hoeven amendment instead will be rolled into a substitute bill that includes all the provisions of the original immigration reform bill S. 744, as well as all of the amendments that have been added to the bill throughout the floor amendment process. It is important for all of us to call and/or e-mail our Senators urging them to reject this new amendment and instead vote YES on the original text of S.744 as it stands without this amendment.

(This action alert was partly adapted from a Jesuit Conference Action Alert on June 24, 2013)