MACHISMO & MUJERISMO: WOMEN’S PERSPECTIVES ON THE IMPLEMENTATION OF THE COLOMBIAN PEACE ACCORDS 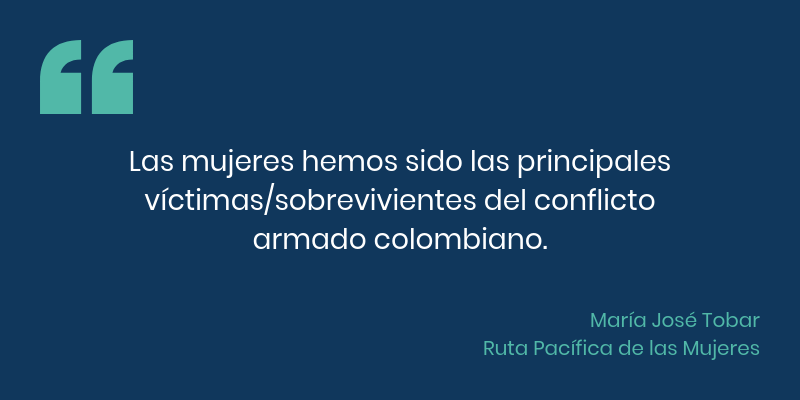 Translation: Women have been the principal victims/survivors of the Colombian armed conflict.

The inclusion of the “enfoque de género” or “gender-based approach” in the Colombian peace accords signed between the government and the FARC guerrillas caught the attention of the entire world. The participation of women in the Colombian peace process was a landmark achievement for women in Colombia and around the world. Unfortunately, however, Colombian women’s rights advocates paint a different picture of implementation and voice severe concern over their inclusion in the implementation of the peace accords. as well as the current status of women’s rights in society at-large.

Representatives from several Colombian civil society organizations that represent, defend, and advocate for women’s rights emphasized the enormous gap that currently exists in Colombia between what is written on paper and what happens in reality. They acknowledged that from the outside looking in, the situation for women in Colombia is outstanding, as there is extensive domestic legislation (including stemming from the peace accords) to ensure equal rights, participation, and inclusion. However, they also called attention to the fact that most, if not all, of those advancements remain on pages, collecting dust. In fact, not only is the current protective and progressive legislation not being implemented, several representatives voiced extreme concern over the regression of women’s rights, especially given the rhetoric of the

current Colombian administration. They are concerned that the few rights that women have gained will soon be lost. 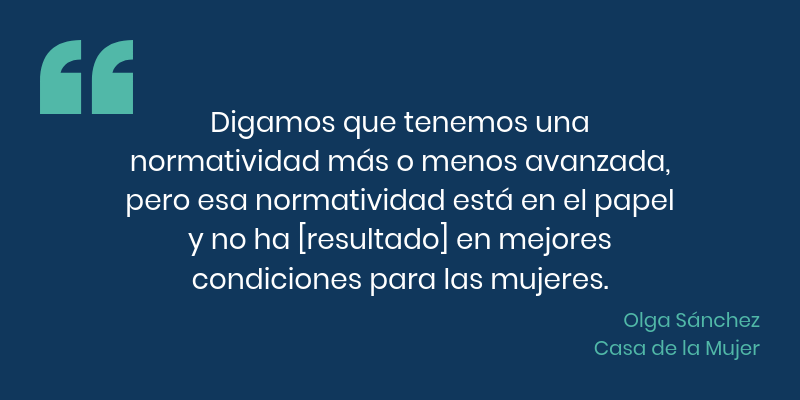 Translation: We have more or less advanced norms, but those norms are on paper and have not resulted in better conditions for women.

The gap between rhetoric and reality is perhaps apparent nowhere more than in the implementation of the gender-based focus of the Colombian peace accords, which has been grossly unsatisfactory. According to a report by the Kroc Institute, only 4 percent of the stipulations with a gender perspective have been completed (the non-gender specific stipulations, on the other hand, have been completed at a rate of 22 percent). Civil society representatives also noted that resources have been scarce, what little implementation has taken place has been slow, and there is an overwhelming lack of political will on the part of the current administration to step up efforts to implement the gender-based focus of the accords. In short, women’s civil society organizations are quickly becoming disillusioned and frustrated with the current level of implementation. 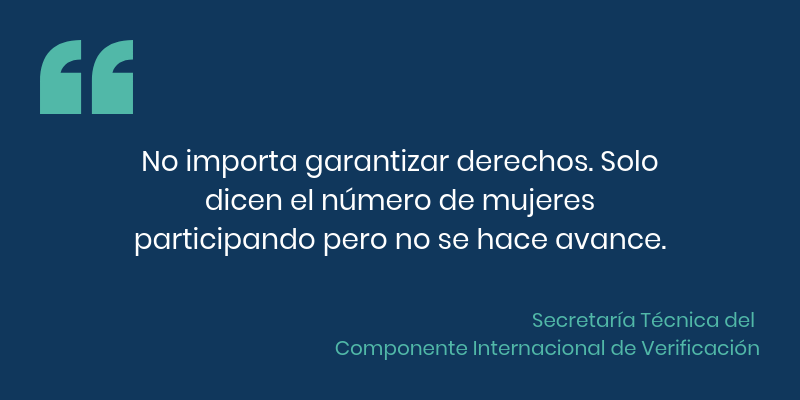 Translation: Guaranteeing rights does not matter. They just say the number of women participating but no progress is made.

One of the issues most frequently raised by these women’s civil society organization representatives is the meaningful participation of women. They noted that the participation of women in the peace accords has been entirely unsatisfactory. They identified a common phenomenon: “mujerismo,” or, ticking the box for women’s participation without including them in any meaningful way. In other words, while women may be present during the process, their meaningful participation is not protected, guaranteed, or encouraged. Civil society organizations mentioned that the leaders of the implementation of the Colombian peace accords are almost never trained or educated on how to incorporate minority groups in these processes and that these leaders are overwhelmingly men. In the creation of the Planes de Desarrollo con Enfoque Territorial (PDETs), which are the development plans drafted by communities in areas affected by the war, for example, they noted that women’s attendance to meetings was small, their active participation even smaller, and that those leading the meeting were often insensitive to the issues raised by women.

On a broader scale, sexism and machismo prevail throughout Colombian society and have affected the implementation of the accords in a particular way. The inclusion and passage of the gender-based focus in the Colombian peace accords has been controversial since its inception, and representatives stated that machismo has created continued difficulty regarding public support for and understanding of the gender-based focus. Women also noted that men often feel threatened by the participation of women in these public spaces as guaranteed by the accords, especially when they are in roles of leadership. They noted that in the most extreme cases, this can lead to violence. 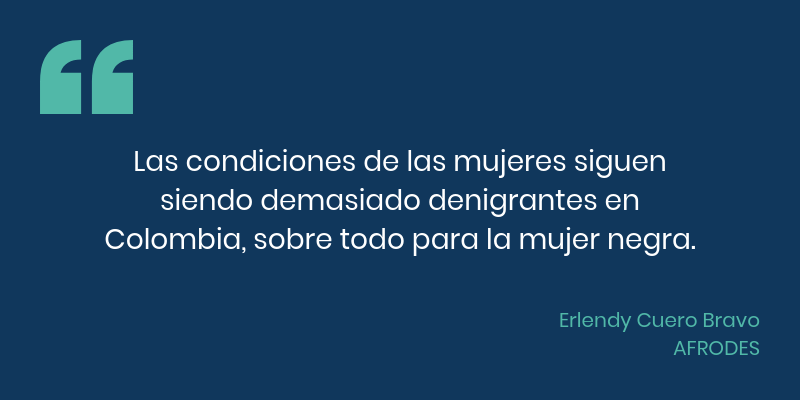 Translation: Women’s conditions are still too degrading in Colombia, especially for black women.

Issues regarding security are another major concern of women’s organizations. Sexual and gender-based violence, as well as domestic violence and abuse, are grave problems facing countless women in Colombia. The endemic and rising killing of social leaders in Colombia is alarming, and many women fear that participating in the peace process in any meaningful way could cost them their lives, especially because, as many expressed, the current measures in place to protect social leaders are grossly inadequate.

Laura Cossette and Kenia Saba Perez are recent graduates from the Georgetown University School of Foreign Service with a Master of Arts in Latin American Studies. They have both lived, worked, and studied in Colombia, where they became interested in the topics of peace, gender, and post-conflict reconstruction. As part of their Masters requirements, they completed a Capstone Project in collaboration with the Latin America Working Group Education Fund (LAWGEF) and the Washington Office on Latin America (WOLA) focused on the implementation of the gender provisions within the Colombian peace accords. As part of this project, they consulted with 10 representatives from Colombian women and LGBTQ+ civil society organizations in order to discern which issues these groups currently consider the most important to achieve a gender-sensitive implementation of the peace accords. Using these consultations as well as extensive secondary research, they co-authored a policy memo to establish recommendations for U.S. policymakers to best support the peace accords, as well as two blog posts on women and LGBTQ+ rights and perspectives on the Colombian peace process.